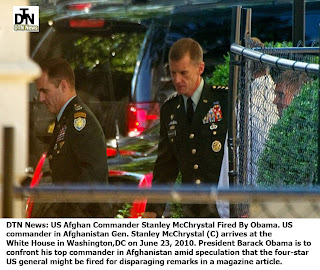 op US military commander in Afghanistan, Gen Stanley McChrystal, has been dismissed by President Barack Obama over comments made in a magazine. He will be replaced by Gen David Petraeus, who led the "surge" in Iraq. Mr Obama insisted it was "a change in personnel but not a change in policy". In a statement, Gen McChrystal said he was leaving because of a "desire to see the mission succeed". He agreed that his statements in Rolling Stone showed "poor judgement". The announcement that Gen McChrystal was standing down came after he had met Mr Obama at the White House on Wednesday. Mr Obama said he had made the decision as Gen McChrystal had failed to "meet the standard that should be set by a commanding general". He insisted: "I don't make this decision based on any difference in policy with General McChrystal, nor on any personal insult."'Poor judgement' Afghan President Hamid Karzai had indicated he did not want Gen McChrystal replaced, with a spokesman describing him as the best commander in nine years of US military operations in Afghanistan. Gen McChrystal quickly apologised for the magazine article, The Runaway General, written by Michael Hastings and due out on Friday, extending his "sincerest apology" and saying it showed a lack of integrity. The wide-ranging article quoted Gen McChrystal and his aides openly criticising senior members of the Obama administration. 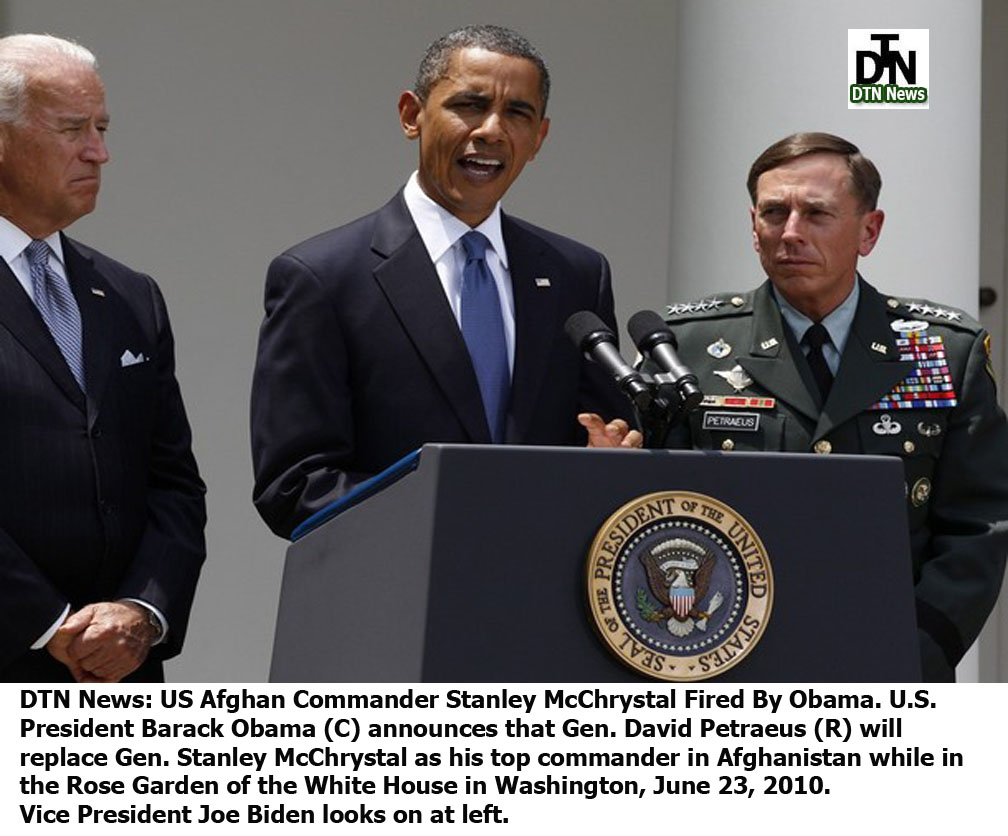 "It was a mistake reflecting poor judgement and should never have happened," he said. At the White House on Wednesday, Gen McChrystal was due to face those he and his aides had criticised at the administration's monthly meeting on Afghanistan and Pakistan on Wednesday. The officials included: **Joe Biden. Gen McChrystal had mocked the vice-president when asked a question about him. "Are you asking about Vice-President Biden? Who's that?" **Karl Eikenberry. Gen McChrystal said he felt "betrayed" by the US ambassador to Kabul during the long 2009 White House debate on troop requests for Afghanistan **James Jones. One of Gen McChrystal's aides says the national security adviser is a "clown... stuck in 1985" **Richard Holbrooke. Gen McChrystal says of an e-mail from the US special representative for Afghanistan and Pakistan: "Oh, not another e-mail from Holbrooke... I don't even want to open it"
Posted by Defense-Technology News at 6/23/2010 11:24:00 AM No comments:

Source: DTN News / AFP
(NSI News Source Info) SINGAPORE - June 23, 2010: Asia-Pacific millionaires are collectively worth more than their European counterparts for the first time, with the rich in China and India leading the way, a study said Wednesday.

Chairman of India's Reliance Industries Mukesh Ambani, seen here in Mumbai on June 17, is one of the richest men in Asia and the world. Asia-Pacific millionaires are collectively worth more than their European counterparts for the first time, with the rich in China and India leading the way, a study has said.

The report on high-net worth individuals (HNWIs) -- defined as anyone with investible assets of at least one million US dollars -- was issued by Merrill Lynch Global Wealth Management and consultancy firm Capgemini.More millionaires are expected to be minted in a region that has produced some of the world's richest people, including Hong Kong's Li Ka-shing and India's Mukesh Ambani, as Asia leads the recovery from the global recession.

The world's population of HNWIs returned to 10 million in 2009 after the global slump, with the largest concentrations still found in the United States, Japan and Germany.

"The Asia-Pacific HNWI population rose 25.8 percent overall to three million, catching up with Europe for the first time, after falling 14.2 percent in 2008," the World Wealth Report said.

They saw their total wealth grow nearly a third to 9.7 trillion dollars, more than erasing 2008 losses and surpassing the 9.5 trillion dollars held by their European counterparts, it said.

The super-rich, or those with investible assets of 30 million dollars or more, represented only 0.9 percent of the global HNWI population, but accounted for more than a third of the wealth, the report said.

These "ultra-HNWI's" raised their collective wealth by 21.5 percent, after seeing an aggregate decline of 24 percent in 2008.

North America had the highest concentration of mega-rich individuals with over 36,000, compared with Europe's 20,700 and 19,600 from the Asia-Pacific region.

In 2009, eight of the 10 economies with the highest growth in HNWI population were from the Asia-Pacific region, led by Hong Kong where their numbers doubled as the stock exchange climbed 73.5 percent, the report said.

The other Asia-Pacific economies on the global top 10 growth list were India, Taiwan, Australia, Singapore, Indonesia and Vietnam, in that order.

Israel, the third highest gainer globally, and Norway, which was in ninth place, were the only countries outside the region on the top 10 growth list.

In a separate study by Forbes Magazine, China has passed India in having the most billionaires in Asia, but India remains home to the region's wealthiest individuals.

Ten of Asia's top 25 billionaires are from India, led by oil and gas tycoon Ambani with an estimated wealth of 29 billion dollars and steel magnate Lakshmi Mittal with 28.7 billion dollars.

Mainland China has only one -- beverage king Zong Qinghou, who is worth seven billion dollars. But overall, it leads Asia with 64 billionaires.

The World Wealth Report said the rich have nearly recouped the losses of 2008 and total assets are now approaching levels last seen in 2007, before a US housing crisis triggered the global slump.

"The rebound has been, and will continue to be, driven by emerging markets -- especially India and China, as well as Brazil," said Bertrand Lavayssiere, managing director for global financial services at Capgemini.

Following massive losses during the 2008-2009 crisis, the world's rich have become more cautious and are taking a more hands-on role in their investments, the report said.

"However, their investment decisions are driven much more from emotional than intellectual factors," said Foong Lai Kiun, Asia-Pacific director for financial services at Capgemini. 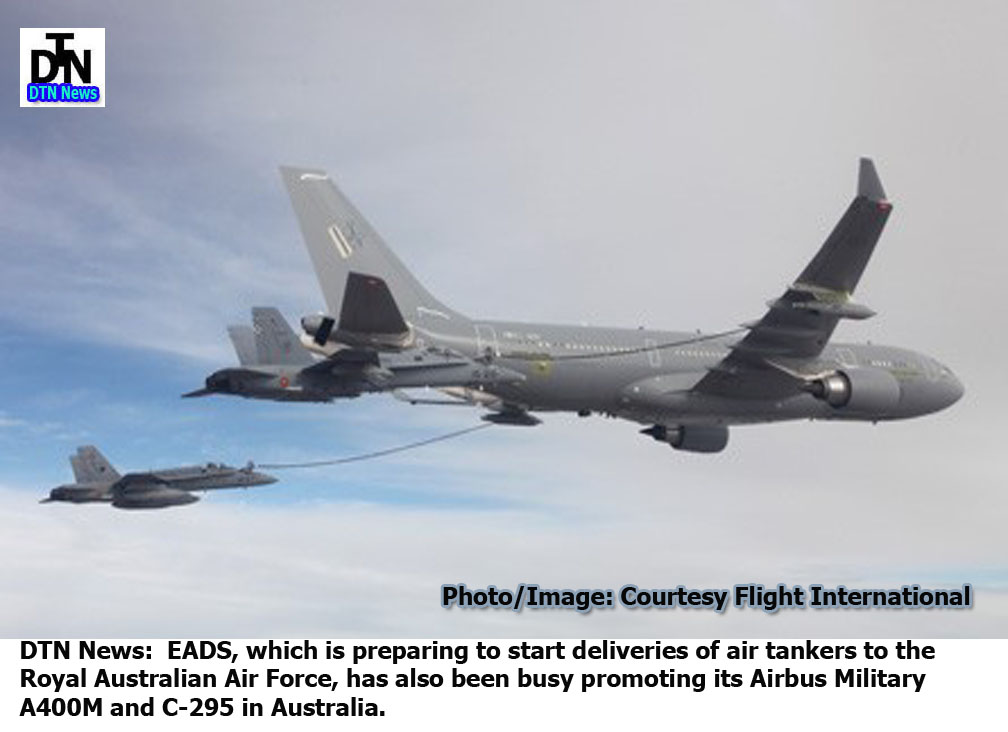 The A400M would be useful to Australia because "it is twice the size of the Lockheed Martin C-130 and carries twice the weight", says EADS corporate vice-president of international development for Asia Pacific and South America Christian Duhain. "It is a stronger aircraft and can take off from rugged airfields," he adds.
EADS has also been putting forward the C-295 to meet the military's requirement for fixed-wing short take-off and landing aircraft. The requirement has come about because late last year the air force retired its last de Havilland Canada DHC-4 Caribou transports. Some of the Caribou's roles will be fulfilled by utility helicopters, but the Australian Defence Force has said publicly that it will also need fixed-wing aircraft. This procurement will come under the Department of Defence's Project 8000 phase two, which calls for "first pass" approval in the 2010-11 to 2011-12 fiscal year and a decision in either 2012-13 or 2014-15. As an interim solution, the service has been relying on Beechcraft King Air 350s. While EADS may be hoping Australia can become the A400M's second export customer outside Europe, it is continuing to work to deliver five Airbus A330 multi-role tanker transports to the air force. Duhain says the programme's first two aircraft are supporting test activities in Spain, and will be delivered by the end of the year. These were modified by Airbus Military and Qantas Defence Services, respectively, with the latter to also prepare the remaining three examples. "We are trying to make Australia part of our global supply chain," says Duhain, who notes that EADS's Eurocopter subsidiary also owns Australian Aerospace in Brisbane. The company assembles the Tiger armed reconnaissance helicopter for the Australian Army. "Our approach is not about offsets: rather our approach is long term," he says. Duhain confirms that there may be an opportunity for Australian Aerospace to make helicopters for export customers.
*This article is being posted from Toronto, Canada By DTN News ~ Defense-Technology News, contact: dtnnews@ymail.com
Posted by Defense-Technology News at 6/23/2010 08:09:00 AM No comments: