Source: DTN News - - This article compiled by Roger Smith from reliable sources Asian Defense News
(NSI News Source Info) TORONTO, Canada - December 9, 2010: John Kampfner, former editor of The New Statesman (2005-2008) and now chief executive of Index on Censorship, a British group promoting freedom of expression, weighed in on the Alan Shadrake case. He wrote a commentary in The Guardian after the 76-year-old freelance British journalist was found guilty of contempt of court over his book, Once a Jolly Hangman: Singapore’s Justice in the Dock. 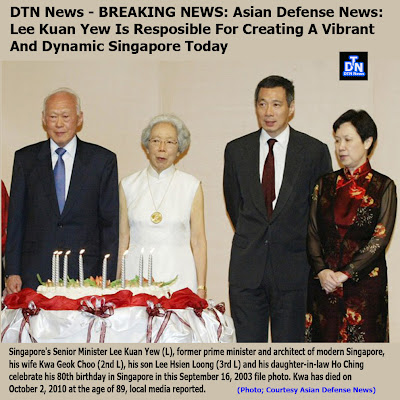 Kampfner, a Briton born in Singapore, had written about Singapore in his book, Freedom for Sale, available at the National Library.

“Why is it that so many people around the world appear willing to give up freedoms in return for either security and prosperity?” he asks and looks at life in Singapore, China, Russia, the United Arab Emirates, India, Italy, Britain and America.

The book, published this year, begins with the chapter, Singapore: Comfortable Model.

Here are excerpts from the chapter, starting with the first line:

“Singapore is quite simply the most successful society in the history of humanity.” I scratch my head and take a large gulp of my ice-cold water. I am sitting in the office of Professor Kishore Mahbubani, Singapore’s leading public intellectual, a man who travels the world telling doubters that countries can be harmonious and prosperous without succumbing to Western liberal democracy. Dean of the Lee Kuan Yew School of Public Policy at the National University, Mahbubani is always a good person to visit to test the political temperature. He plays host to a stream of visitors from around the world. Before me a delegation of Chinese breezes past. After me comes the Swiss ambassador. They are all keen to learn the secret of the success of an island state that is both economic miracle and social test bed.

I am taken aback by the hubris of my host. But I am wary of being dismissive, of falling into the trap of the “Western mindset”, a term used to dismiss criticisms levelled by foreigners. For me it is

more than idle curiosity. I was born in Singapore, and although I left when I was young, my parents lived in the city-state for fifteen years… I have also kept up with a number of sons and daughters of my parents’ friends, some Indian. some Malay, most Chinese. They are established doctors, lawyers, financiers, musicians. They went to universities in Britain, the United States, or Australia, but most came back. They treat Singapore’s gleaming Changi airport as a bus stop, hopping on and off planes without thinking twice. In their day-to-day lives, they are able to do whatever they please. They enjoy their private freedoms, but free speech and political activism are things they express when they are abroad. I remember, as a student, going on demonstrations with several of my friends when they were in London. Back home, they button their lips. They can take it or leave it, they say. They do it out of choice.

The term “pact” was made for Singapore. The state’s per capita GDP is one of the highest in the world… In return, members of the citizenry avoid causing trouble. The city-state has become a monument to wealth creation… Everything works spectacularly well. The rich are exceedingly rich. The poor are exceedingly comfortable. The Singapore experiment has been conducted by Lee Kuan Yew, its prime minister for thirty years and supreme leader since relinquishing that office. Although Lee dominates the state, the Singapore pact is about much more than one man. It requires, and receives, the willing cooperation of the vast majority of the people…

In the course of 2008, Singapore became the first country to go into recession. Its reliance on exports had left it particularly vulnerable. But, in my sparring sessions at the National University and elsewhere, I saw little sign that the downturn was challenging the fundamental trade-off on which society is ordered, Mahbubani went further, arguing that Asia is better placed economically and politically to rebuild after the crisis. Asia, he said, is making progress towards its eventual goal of practising democracy more harmoniously than the West, largely because of its emphasis on

collectivist rather than individualist endeavour… The demands of the individual are subordinated to those of the collective, and yet the individual is free in most areas of life. Anyone with any talent is co-opted into the system. “Why are Brazilians best at football? They look in the barrios for six-year-old talent. We do the same with the state. We cherry-pick the best,” Mahbubani said. “If you think you can run something better, we give you the chance to prove it. We absorb dissent. The stupidest thing is to crush it. No brain is wasted. The political competence of our founding fathers was extraordinary. I find that very rarely in my travels around the world.” Mahbubani’s thesis, which he has set out in a recent book, has gone down well in Asia, less so in Europe and America. He was not surprised. “The West is becoming the problem,” he said. “You don’t want to give up the space. You’re also proving increasingly incompetent at government.” He concluded: “By every indicator Singapore is the most successful nation. It is not just the wealth we have created; it is how we take care of the people at the bottom of the pile.” …

At the Raffles Bar I spent an enjoyable evening with a senior newspaper executive… I asked my drinking partner at Raffles, if he saw any prospect of a softening of the defamation culture. No chance, he said. The law of contempt had been designed to protect public confidence in state institutions, in good times and bad. Most people in Singapore – citizens, people there on international business, representatives of foreign governments – had a vested interest in preserving the status quo. Why else, he suggested, would Singapore have done so well for so long?

NEW DELHI - India's plans to build naval infrastructure on the east coast is a sign of the extra emphasis the country is placing on its defenses against China, analysts here say. ... full story 8 Dec 11:27 EST (16:27 GMT)

LAGOS - Nigeria has seized another illegal arms shipment at its main port, including pistols and military vehicles, a navy spokesman said Nov. 24, weeks after the discovery of a weapons cache sent from Iran. ... full story 24 Nov 11:09 EST (16:09 GMT)

LAGOS - An illegal arms shipment that included rockets and grenades discovered in Nigeria this week was loaded in Iran by an Iranian trader, the firm that operates the vessel that delivered it said on Oct. 29. ... full story