Source: DTN News - - This article compiled by Roger Smith from reliable sources
(NSI News Source Info) KOTTAKKAL, Kerala, India - October 21, 2010: In a recent interview, the Indian Air Force Air Chief Marshal P.V. Naik had been quoted saying that the Indian Air Force was close to having a 50 percent obsolence level in its equipment. This was largely a reference to the air defence capabilities of the Indian Air Force.
For the past few years, however, the Government has moved to address these gaps in capabilities with the following orders / upgrades planned:
*THIS ARTICLE IS BEING POSTED FROM TORONTO, CANADA BY DTN NEWS ~ DEFENSE-TECHNOLOGY NEWS, CONTACT:DTNNEWS@YMAIL.COM
Related: -- DRDO, MBDA to Jointly Develop Maitri Quick Reaction Missile -- IAI Develops Arrow 3 Interceptor for Long Range Incoming Missiles
Posted by Defense-Technology News at 10/21/2010 03:20:00 AM No comments:

DTN News: Pakistan TODAY October 21, 2010 - With Pakistani Visit To The U.S., A Chance To Ease Tensions

DTN News: Pakistan TODAY October 21, 2010 - With Pakistani Visit To The U.S., A Chance To Ease Tensions 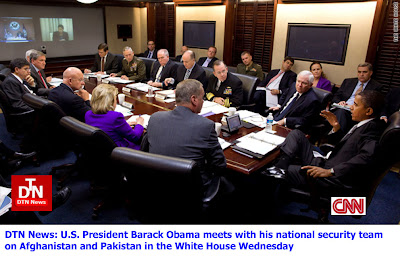 Pakistani Foreign Minister Shah Mahmood Qureshi and Gen. Ashfaq Parvez Kayani, chief of the Pakistani army, are leading the their nation's delegation for meetings with Secretary of State Hillary Clinton, Defense Secretary Robert Gates and Adm. Mike Mullen, chairman of the Joint Chiefs of Staff. Cameron Munter, the next U.S. ambassador to Pakistan, also will join the talks.

The U.S.-Pakistan Strategic Dialogue, which started Wednesday, will address all facets of the relationship between Washington and Islamabad, but counterterrorism cooperation will be a major aspect of the talks.

During the talks the Obama administration is expected to announce a security assistance package totaling as much as $2 billion over five years to help Pakistan fight extremists on its border with Afghanistan, senior U.S. officials and diplomatic sources tell CNN. The two sides also will discuss how to help Pakistan rebuild after this summer's devastating floods.

The talks come amid renewed friction between the U.S. and Pakistan after a NATO helicopter gunship in pursuit of insurgents killed Pakistani soldiers in a border region with Afghanistan, prompting Pakistan to temporarily close a supply route into Afghanistan.

It also comes on the heels of a White House report sent to Congress earlier this month that uses unusually tough language to suggest the ally is not doing nearly enough to confront the Taliban and al Qaeda, despite repeated Obama administration claims in public that Pakistan is working hard to crack down on militants

The White House assessment, obtained by CNN, is particularly tough on Pakistan's inability to make gains in North Waziristan, where many analysts believe key al Qaeda leaders have gained a safe haven to use as a base to plot terror attacks against Western targets.

"This is as much a political choice as it is a reflection of an under-resourced military prioritizing its targets," the report said.

The $2 billion security package, which is on top of a $7.5 billion aid package over five years in non-military counter-terrorism assistance approved by Congress last year, seeks to address what U.S. officials call a legitimate lack of Pakistani capacity to fight militants.

"There is an expectation with that capacity comes a greater effort," a senior official said.

But U.S. patience with Pakistan's inability to crack down on militants is wearing thin, especially among members of Congress. Administration officials say the United States will warn the Pakistani leaders that it would be hard to persuade Capitol Hill or the American public to continue supporting the country if Pakistan failed to intensify its efforts to crack down on militants in its tribal areas, or if a terrorist plot against America was traced back to terrorists being given safe haven in Pakistan.

"There will be opportunities for us to detail for the Pakistanis what more must be done," White House Spokesman Robert Gibbs said about the talks.

Gibbs gave the Pakistani government credit for what he called "an unprecedented level of cooperation," but said the United States has been clear about what is expected of Pakistan.

The dialogue is designed to build trust with Pakistan, amid concerns the United States is not going to remain engaged with the region over the long term. This week the two sides will break into ten working groups to discuss issues like expansion of trade, public diplomacy and American investment in the Pakistani economy and agricultural and technology sectors. The Pakistanis also hope to convince the U.S. to engage in civil nuclear cooperation, like it does with India, and give Pakistan preferential access to U.S. markets for Pakistani goods such as textiles

At the last strategic dialogue in Islamabad in July, Clinton announced a major aid package for Pakistan -- with hundreds of millions of dollars pledged on projects to address the country's water and power shortage, and its floundering economy. Some of that aid is being redirected to flood recovery.

There are potentially divisive issues, such as NATO's role in facilitating reconciliation talks between Afghan President Hamid Karzai and the Taliban. Pakistan has long maintained it wants to be involved in a political settlement involving the Taliban, but is currently not at the table.

"We'll discuss this as a dimension of our strategic dialogue this week," State Department spokesman P.J. Crowley said Wednesday. "To the extent that Pakistan can play a role in supporting an Afghan-led process, that is something that we have discussed with Pakistan, but more importantly that's something that Pakistan has discussed with Afghanistan."

Officials from both sides stress the flare-up in tensions after the NATO border incident has subsided and that this week's talks will put the relationship back on track.

Pakistani Ambassador Husain Haqqani said in an interview that the talks help both sides focus on common strategic interests.

"We are allies but we don't always have synchronized thinking and a coincidence of understanding of interests" he said. "The talks give a long term dimension to U.S. and Pakistan relations, which help that understanding."

*Comprehensive daily news related on Aerospace/Defense for the world of TODAY.