Source: DTN News - - by Roger Smith
(NSI News Source Info) TORONTO, Canada - September 26, 2012: Should  USA or Israel proceed with its venture to attack Iran on pretext of nuclear factor, the war will eventually spread around the globe with countries taking sides. 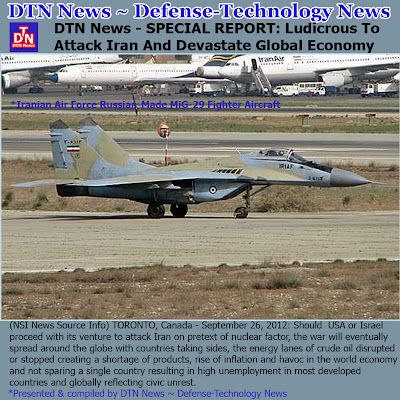 The energy lanes of crude oil disrupted or stopped creating a shortage of products, rise of inflation and havoc in the world economy and not sparing a single country resulting in high unemployment in most developed countries and globally reflecting civic unrest.

The above scenario could be feasible, but not factual as no country in the world would be ludicrous to act against Iran and devastate global economy. U.S. would get sucked into war if Israel strikes Iran.

Iran is a mature nation and sovereignty must be respected, in spite of what has happened on the nuclear factor with credit of being home to one of the world's oldest continuous major civilizations, with historical and urban settlements dating back to 4000 BC. The Medes unified Iran as a nation and empire in 625 BC.

Had U.S. foreign policy been positive towards Iran, the account today would have different prospective relating to American forces involvement in Asia and Mid East countries.

a) Afghanistan; According to media reports Iran is supporting Taliban instead Iran would have contained the elements and NATO forces could peacefully exit by 2014.
b) Iraq; With Iran assistance sectarian violence could be curtailed.
c) Syria; Iran influence would have brought Syria to the peace table and civil blood shed could have been avoided.
d) Lebanon; Iran would have contained Hezbollah instead as of now supporting the elements. Israel could have maintained cordial relations with Iran and reflecting the repetition of bygone era of The Shah Mohammad Reza Pahlavi in peaceful existence.

Source: DTN News - - This article compiled by Roger Smith from reliable sources RT
(NSI News Source Info) TORONTO, Canada - September 26, 2012: Tehran has reportedly unveiled an advanced drone and tested an anti-aircraft missile system as the Islamic Republic proves it has the military might to fend off any threat amidst, including advanced US fighters.

The Islamic Revolution Guards Corps (IRGC) showcased its new unmanned aerial vehicle, the Shahed 129, on Monday.
Tehran claims the domestically produced unmanned aerial vehicle (UAV) is capable of carrying out combat and reconnaissance missions with its 24-hour nonstop flight capability, state-owned Press TV reports.
They also say the drone can hit targets at up to 2,000 kilometers away and can be equipped with electronic and communication systems which can transmit live feeds. The military says the Shaded 129 drone will aid Iran’s surveillance capabilities in border areas, the Persian Gulf, and the Sea of Oman.
The IRGC also successfully test-fired the country’s latest anti-aircraft missile system.
The Ra'ad mid-range missile system is equipped with Taer 2 missiles and can reportedly intercept targets at a range of 50 kilometers and fly at an altitude of almost 23 kilometers.
Tehran claims the domestically manufactured missiles are "more advanced" than the Russian-made Buk family of missiles, Fars news agency reports.
Fars also reports that at Sunday’s naval drill, four missiles hit a warship-sized target, sinking it in 50 seconds.
"We have missile systems that cover all the Persian Gulf coasts and the American bases (in the region)," Admiral Ali Fadavi, commander of the Guards' navy, told Fars.

Iranian bomber drone Karrar (file photo)
The admiral also added that within half a year "big naval maneuvers in the Strait of Hormuz," will take place.
"This system has been built with the aim of confronting American warplanes," Iranian Brig. Gen. Amir Ali Hajizadeh, commander of the Islamic Revolutionary Guards Corps' aerospace division, declared late last week.
Analysts regularly challenge some of Iran's military assertions, however, saying the Islamic republic tends to exaggerate its military capabilities.
The demonstration coincided with US-led naval exercises in the gulf amid rising anxiety over Iran’s refusal to abandon its controversial nuclear program, which the country says is for peaceful means only.
Israel, which perceives the program as Tehran’s drive to obtain intercontinental ballistic missiles, has continually threatened a pre-emptive strike.
Washington has opposed unilateral Israeli action, fearing it will trigger a regional conflict. The US has beefed up its naval and air personnel in the region, however.
The move is seen as threatening by the Islamic Republic. “Iran will not start any war but it could launch a preemptive attack if it was sure that the enemies are putting the final touches to attack it,” Hajizadeh has warned adversaries.
Hajizadeh also declared that an Israel-Iran war would be disastrous "and will turn into World War III as other countries become embroiled in the conflict

Iran threatens to attack US bases if war erupts

Iranian officials say they aren't scared of Israel’s threats of a military assault aimed at their rumored nuclear warhead program, but a senior officer in Iran's Revolutionary Guard says such a strike would warrant retaliation against US bases.
Israel vs IranIran tension

Iran has constructed nearly a third of the missile defense system it is developing in lieu of the S-300 system Moscow refused to sell it. The Islamic Republic hopes the system will be completed by next year, a senior military official said.
Iran tension

Iran has successfully test-fired an upgraded version of its Fateh-110 short-range ballistic missile. The new missile is “meant for defense,” but is capable of destroying both land and sea targets with the same “pinpoint precision.”
Israel vs IranIran tension

An Iranian military official has warned that military conflict between Iran and Israel could “turn into World War III.” He added that if Israel “is putting the final touches on attacking Iran,” a preemptive strike against Tel Aviv would ensue.
Israel vs IranIran tension

US to flex naval might in Persian Gulf war games

The US Navy is leading its largest-ever war games in the Persian Gulf, with warships from 25 countries being deployed in the region. Tehran, in return, is preparing for its biggest air defense war game in the history of Islamic Republic next month.