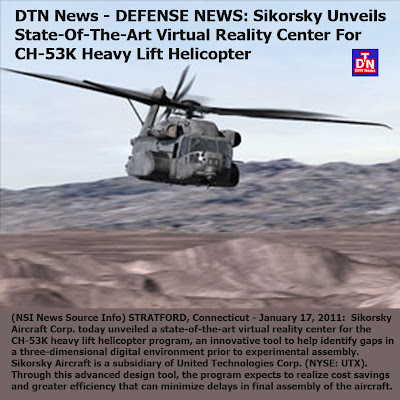 Through this advanced design tool, the program expects to realize cost savings and greater efficiency that can minimize delays in final assembly of the aircraft.

“The virtual reality tool allows the team to find production and maintenance issues that typically only could be found during the initial build of the aircraft,” said Dr. Michael Torok, Sikorsky vice president and chief engineer for Marine Corps programs. “With this tool, we can identify these potential problems in time to avoid them. Ultimately, this will save time and money.”

Located within the engineering labs at Sikorsky’s main manufacturing facility, the virtual reality center uses sophisticated software, along with 12 cameras, a head-mounted display headset, gloves, and a gripping tool. All devices are linked to three computers, which comprise the “command center” for operating the system.

“This tool will enhance the designer’s ability to design an aircraft that is easier to maintain. Designers will no longer have to rely on their imaginations to understand assembly and maintenance issues. They will be able to experience them long before parts are fabricated,” said Mark Miller, Sikorsky vice president, research and engineering.

Dennis Jarvi, Sikorsky vice president, Navy/Marine Corps programs, added: “The joint Sikorsky/Naval Air Systems Command (NAVAIR) CH-53K helicopter program team is working diligently to deliver a high quality platform that will be extremely important to the Marine Corps future heavy lift mission. The virtual reality center is the final tool in the CH-53K digital design suite, as the team collaborates to use proven and mature technologies that will significantly expand the fleet’s abilities.”

Sikorsky Aircraft received a $3 billion System Development and Demonstration (SDD) contract in April 2006 to develop a replacement for the U.S. Marine Corps CH-53E heavy lift helicopter. The new aircraft program is planned to include production of more than 200 aircraft. Currently, the CH-53K helicopter is in the SDD phase with all of the major subcontracts awarded and valued at over $1.1 billion.

The CH-53K helicopter will maintain virtually the same footprint as its predecessor, the three-engine CH-53E SUPER STALLION™ helicopter but will nearly triple the payload to 27,000 pounds over 110 nautical miles under “hot high” ambient conditions. The CH-53E helicopter is currently the largest, most powerful marinized helicopter in the world. It is deployed from Marine Corps amphibious assault ships to transport personnel and equipment and to carry external (sling) cargo loads.

This press release contains forward-looking statements concerning potential production and sale of helicopters. Actual results may differ materially from those projected as a result of certain risks and uncertainties, including but not limited to changes in government procurement priorities and practices, budget plans or availability of funding or in the number of aircraft to be built; challenges in the design, development, production and support of advanced technologies; as well as other risks and uncertainties, including but not limited to those detailed from time to time in United Technologies Corporation’s Securities and Exchange Commission filings.

Contacts
*This article is being posted from Toronto, Canada By DTN News ~ Defense-Technology News, contact: dtnnews@ymail.com