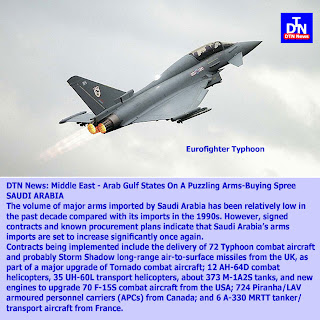 "This was just the latest indication that Saudi Arabia is planning a new arms-purchasing spree similar to that in the 1990s, raising questions about the possible impacts of military build-ups in the Gulf region, which includes both Iran and Iraq alongside the Arab Gulf states," states a 'fact sheet' compiled by Carina Solmirano and Pieter D. Wezeman. Since transparency is poor in most of the Gulf region, the SIPRI fact sheet combines data on known military spending and recent and planned arms imports in the Gulf states: Bahrain, Iran, Iraq, Kuwait, Oman, Qatar, Saudi Arabia and the United Arab Emirates (UAE). The importance of the SIPRI paper lies in the fact that assessments of military developments in the Gulf states are complicated by very low levels of public transparency. It brings together SIPRI data on the Gulf states' military expenditure and on arms transfers to the region, taken from the SIPRI Military Expenditure Database and the SIPRI Arms Transfers Database. The paper notes that recent increases in military spending and arms procurement by the eight states bordering the Gulf -- Bahrain, Iran, Iraq, Kuwait, Oman, Qatar, Saudi Arabia and UAE -- have revived widespread discussion about the possible impacts of military build-ups in the region. Saudi Arabia and the UAE stand out for their high levels of spending and arms imports, yet almost all the Gulf states devote a larger share of their gross domestic product (GDP) to military spending than the global average. However, the available data on the Gulf states' military expenditure is highly uncertain. In many cases, notably Bahrain and Iran, not all military expenditure appears in the official figures; while in others, particularly Oman, Qatar and Saudi Arabia, states do not report their military spending separately from their broader spending on security, including internal security. It is also unclear whether some arms imports are paid for directly from oil revenues and thus do not appear in government accounts. In the case of Iraq, only budget figures are available, and actual expenditure may vary significantly, notes the paper. "The patchiness of the data makes it hard to describe regional trends in military spending. However, Saudi Arabia is clearly the biggest spender, followed by the UAE and Iran. Iraq's military budget shrank by almost 30 per cent between 2008 and 2009. Almost all the Gulf states consistently spend a greater share of their GDP on the military than the global average. Indeed, in the period 2000-2008, Oman and Saudi Arabia spent more of their GDP on the military than any other country for which data is available," authors of fact sheet, Solmirano and Wezeman say. The Gulf states accounted for 10 per cent of imports of major conventional weapons in the years between 2005 and 2009. Since arms production capabilities in the region are limited, almost all procurements of major weapons were imports. The weapons were supplied by at least 30 countries. The largest suppliers were the United States, France, Russia, the Britain and China. Russian and Chinese exports went mainly to Iran, which received no major arms from the USA or from most European states. The report notes that the pattern of imports to the region has changed over time. While the UAE accounted for 57 per cent of the volume of imports of major conventional weapons over the period 2005-2009 and Saudi Arabia for only 10 per cent, over the longer period 1990-2009 Saudi Arabia was the largest importer in the Gulf region. While advising caution, the fact sheet lists most significant transfers of major conventional weapons to the Gulf states since 2005. UAE The volume of arms imported by the UAE has increased significantly in the past decade and the country is likely to remain a major arms importer in the coming years. Contracts for the delivery of 62 Mirage-2000-9 combat aircraft from France and 80 F-16E combat aircraft from the USA were completed in 2005-2008. In 2008-2009, 30 AH-64D combat helicopters were delivered from the USA. Contracts being implemented include the delivery from the USA of 4 Patriot surface-to-air missile (SAM) systems, 60 UH-60M armed transport helicopters, and 12 C-130J-30 and 6 C-17 transport aircraft; from France of 3 A-330 MRTT tanker/transport aircraft and 6 Baynunah corvettes; from Russia of up to 50 Pantsyr-S1 air defence systems; and from Italy of 2 Falaj-2 corvettes and 1 Abu Dhabi frigate. The UAE's arms procurement plans include 3 Terminal High Altitude Area Defence (THAAD) anti-ballistic missile systems and 16 CH-47F transport helicopters from the USA; 60 combat aircraft from France or the USA; 48 M-346 advanced trainer aircraft and another 2 Falaj-2 corvettes and 1 Abu Dhabi frigate from Italy; and 3 airborne early warning aircraft, which several countries are competing to supply. SAUDI ARABIA The volume of major arms imported by Saudi Arabia has been relatively low in the past decade compared with its imports in the 1990s. However, signed contracts and known procurement plans indicate that Saudi Arabia’s arms imports are set to increase significantly once again. Contracts being implemented include the delivery of 72 Typhoon combat aircraft and probably Storm Shadow long-range air-to-surface missiles from the UK, as part of a major upgrade of Tornado combat aircraft; 12 AH-64D combat helicopters, 35 UH-60L transport helicopters, about 373 M-1A2S tanks, and new engines to upgrade 70 F-15S combat aircraft from the USA; 724 Piranha/LAV armoured personnel carriers (APCs) from Canada; and 6 A-330 MRTT tanker/transport aircraft from France. (End)
*This article is being posted from Toronto, Canada By DTN News ~ Defense-Technology News, contact: dtnnews@ymail.com
© Copyright (c) DTN News Defense-Technology News
Posted by Defense-Technology News at 11/06/2010 10:11:00 PM No comments: 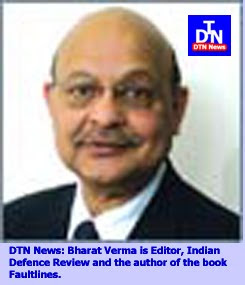 There are multiple reasons for a desperate Beijing to teach India the final lesson, thereby ensuring Chinese supremacy in Asia in this century. The recession that shut the Chinese exports shop is creating an unprecedented internal social unrest. In turn, the vice-like grip of the communists' over the society stands severely threatened.
Unemployment is on the increase. The unofficial estimate stands at whopping 14 percent. Worldwide, the recession has put 30 million people out of their jobs. Economic slowdown is depleting the foreign exchange reserves. Foreign investors are slowly shifting out. To create a domestic market, the massive dole of loans to individuals is turning out to be a nightmare. There appears to be a flight of capital in billions of dollars in the shape of diamond and gold bought in Hong Kong and shipped out in end 2008.
The fear of losing control over the Chinese masses is forcing the communists to compulsorily install filtering software on new computers on sale, to crush dissent on the Internet, even though it is impossible to censor in entirety the flow of information as witnessed recently in Tibet, Xinjiang and Iran today. The growing internal unrest is making Beijing jittery. The external picture appears to be equally dismal. The unfolding Obama strategy seems to be scoring goals for democracy and freedom without firing a single shot. While George Bush unwittingly united and arrayed against himself Islamic countries and radical Islam worldwide, Obama has put radical Islam in disarray by lowering the intra-societal temperature vis-a-vis America and the Muslim world. He deftly hints at democracy in his talk without directly threatening any group or country and the youth pick it up from there, as in Iran. 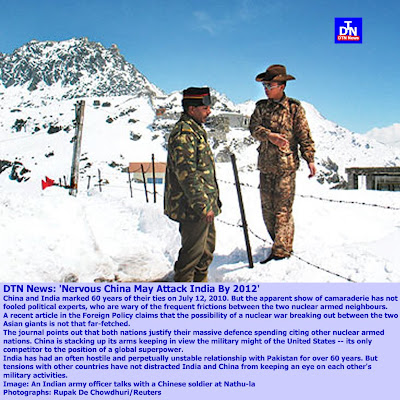 Mrs. Donna Willard, the ship's sponsor, performed the traditional honor of breaking a bottle of American sparkling wine across the submarine's hull. She is the wife of Adm. Robert F. Willard, the current Commander of the U.S. Pacific Command.

Jackalyne Pfannenstiel, assistant secretary of the Navy for Energy, Installations and Environment, served as the keynote speaker.

"To the men and women of Northrop Grumman Shipbuilding, General Dynamics Electric Boat and the Navy'sVirginia class program, congratulations on another world-class submarine," said Pfannenstiel. "With her nuclear power, this sub demonstrates some of our [nation's] finest technical capabilities."

"We know that the work we do is important," said Mike Petters, corporate vice president and president of Northrop Grumman Shipbuilding. "We know we are a critical part of the Navy/industry team that produces the most sophisticated and complex ships to keep our nation safe. We know we have to earn our place on that team with each and every weld with each and every pipe and with each and every test. We do this by never losing focus on what our founder, Collis P. Huntington, committed to 125 years ago, when he promised 'Always Good Ships'."

"The shipbuilding team at Newport News and Electric Boat have done a great job constructing this powerful ship," said Donald. "Thank you for what you do."

In conjunction with California's christening, Team Submarine launched an interactive learning event to promote science, technology, engineering and mathematics (STEM) at the Naval Surface Warfare Center in Corona, Calif. During the month-long event students, teachers and parents watched the christening, will learn about submarines through exhibits and participate in an interactive submarine simulation called Mission Ocean. These STEM events are being held at the Naval Surface Warfare Center in Corona today, at the Admiral Kidd Conference Center in San Diego on Nov. 15 and at the California Science Center in Los Angeles on Nov. 18.

California, the eighth ship of the Virginia class, is named after the "Golden State." The ship's motto is, "Silence is Golden." Upon delivery to the Navy in 2011, it will be the most modern and sophisticated attack submarine in the world, providing undersea supremacy well into the 21st century. Northrop Grumman Shipbuilding is teamed with General Dynamics Electric Boat to build Virginia-class submarines.

Source: DTN News - - This article compiled by Roger Smith from reliable sources
(NSI News Source Info) NEW DELHI, India - November 7, 2010: Budget airline SpiceJet will buy 30 B737 planes from US aircraft manufacturer Boeing in a deal worth $2.7 billion, which will form part of $10 billion pacts being sealed during US President Barack Obama's visit. 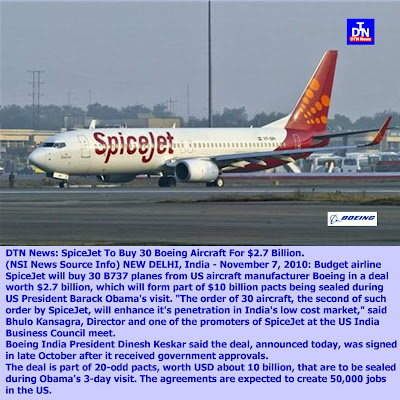 "The order of 30 aircraft, the second of such order by SpiceJet, will enhance it's penetration in India's low cost market," said Bhulo Kansagra, Director and one of the promoters of SpiceJet at the US India Business Council meet.

The deal is part of 20-odd pacts, worth USD about 10 billion, that are to be sealed during Obama's 3-day visit. The agreements are expected to create 50,000 jobs in the US.

The Gurgaon-based airline had said in July that it would order 30 Boeing 737-800 aircraft to expand its fleet and deliveries will begin by 2014. The airline is promoted by Sun TV chief Kalanithi Maran, who acquired a majority stake in the company in June.

Besides this deal, the SpiceJet Board has recently approved a plan to buy up to 30 small aircraft from Canada's Bombardier to enhance regional connectivity in the country.

The delivery of Bombardier jets is scheduled to commence in 2011.

The airline, with a fleet of 22 Boeing B737 aircraft, has a market share of 13 per cent. It operates 153 flights daily to 20 Indian cities and recently it had started its international operations with flights to Kathmandu and Colombo.

*Comprehensive daily news related on Aerospace/Defense for the world of TODAY.