SEATTLE, December. 8, 2011: Boeing (NYSE: BA) and Air Lease Corporation (ALC) have finalized an order for four 787-9 Dreamliners. ALC also exercised options for four Next-Generation 737-800s. The order, with a list-price value of more than $1.2 billion, marks the completion of an agreement announced during the Paris Air Show in June. 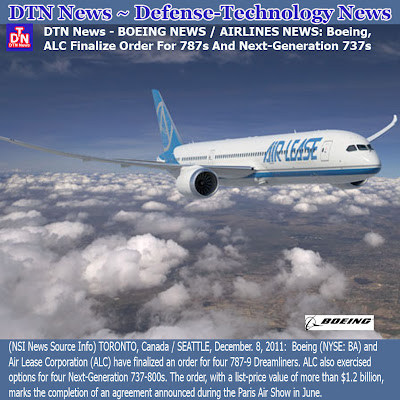 "This order is a continuation of Air Lease Corporation's disciplined approach to building its fleet," said Ray Conner, senior vice president for Sales and Customer Support for Boeing Commercial Airplanes. "Air Lease Corporation has positioned itself for success since starting business early last year. These 787-9 Dreamliners and 737-800s support its strategy of establishing a fleet of young, high-quality, high-demand airplanes for its airline customers."

The airplanes join the 74 Next-Generation 737-800s and five 777-300ER (Extended Range) airplanes that ALC currently has on order.

"This order will continue to diversify our portfolio of efficient airplanes for our airline customers," said Steven F. Udvar-Hazy, chairman and CEO of Air Lease Corporation. "The 787-9, with its increased size and range, will provide our customers the ability to serve more cities with the lowest possible cost per seat."

The Boeing 787-9 Dreamliner is a slightly larger version of the 787-8 and will carry 250-290 passengers on routes of 8,000 to 8,500 nautical miles (14,800 to 15,750 kilometers). The 787 provides airlines with incredible fuel efficiency, resulting in exceptional environmental performance. The airplane uses 20 percent less fuel than today's similarly sized airplanes. It also will travel at a speed of March 0.85, which is similar to the speed of today's fastest wide-body airplanes.

Launched in 2010, ALC is an aircraft leasing company based in Los Angeles, California, that has airline customers throughout the world. ALC and its team of dedicated and experienced professionals are principally engaged in purchasing commercial aircraft and leasing them to its airline partners worldwide through customized aircraft leasing and financing solutions. For more information, visit ALC's website at www.airleasecorp.com. 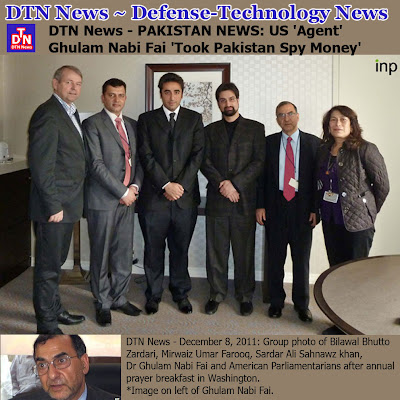 Ghulam Nabi Fai, 62, was accused of working in Washington for Inter-Services Intelligence (ISI) to lobby for Kashmiri independence.

He was arrested in July and charged with failing to register as a foreign government agent.

The Pakistan government has denied any knowledge of Mr Fai's activities.

Kashmir is at the centre of its row with India.

Mr Fai, who was born in Indian-administered Kashmir, and another man, Zaheer Ahmad, a US citizen of Pakistani origin, were charged with using at least $4m (£2.5m) in Pakistani funds in a bid to influence the US position on the disputed territory of Kashmir, prosecutors said.

Prosecutors say Mr Ahmad recruited people to act as donors who would give money to the council which really was coming from the Pakistani government. He is not under arrest and is believed to be in Pakistan.

"For the last 20 years, Mr Fai secretly took millions of dollars from Pakistani intelligence and lied about it to the US government," US Attorney Neil MacBride said in statement.

"As a paid operative of ISI (Pakistan's Inter-Services Intelligence spy agency), he did the bidding of his handlers in Pakistan while he met with US elected officials, funded high-profile conferences, and promoted the Kashmiri cause to decision-makers in Washington."

Correspondents say Mr Fai's guilty plea comes at a time when relations between Washington and Islamabad have worsened.

The US said Mr Fai's Pakistani handlers funnelled millions of dollars from the ISI through a front group, the Kashmiri American Council.

Officially, the Kashmiri American Council had a much smaller budget and it said that it received no foreign grants.

The group contributed money to US election campaigns, helped fund conferences and other efforts, including meetings with White House and state department officials, the US alleges.

Kashmir has been a flashpoint between India and Pakistan for decades. Both countries claim the territory in its entirety and have fought two of their three wars over it.