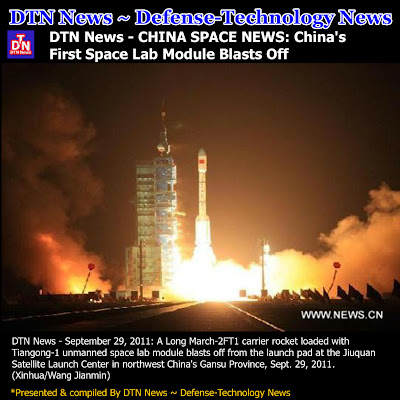 Engineers are conducting the final preparations before launching China's first space laboratory module at the end of this week at a launch center in northwest China.
The unmanned Tiangong-1 module was originally scheduled to be launched into low Earth orbit between Sept. 27 and 30. However, a weather forecast showing the arrival of a cold air mass at the Jiuquan Satellite Launch Center forced the launch to be rescheduled for Sept. 29 or 30, depending on weather and other factors.
"This is a significant test. We've never done such a thing before," said Lu Jinrong, the launch center's chief engineer.
A full ground simulation was conducted on Sunday afternoon to ensure that the module and its Long March 2F carrier rocket are prepared for the actual launch.
Cui Jijun, commander-in-chief of the launch site system and director of Jiuquan Satellite Launch Center, told Xinhua that they developed a new target spacecraft for the mission and made more than 170 technical improvements to the Long March 2F, China's manned orbital carrier rocket.
Engineers have also made more than 100 updates at the launch site in order to make it compatible with the Tiangong-1, Cui added.
The module will conduct docking experiments after entering orbit, which is the first step in China's space station program.
Cui said the launch site has an updated computer center and command monitoring system and increased ability to adapt to changes in mission conditions, as well as the resources to handle both the launch and command duties. An integrated simulation training system for space launching has also been developed for the docking mission.
The mission comes just one month after the Long March 2C rocket malfunctioned and failed to send an experimental satellite into orbit. The Tiangong-1 mission was subsequently rescheduled in order to allow engineers to sort out any problems that might occur during the launch.
Cui said that engineers conducted a two-month comprehensive technical check on equipment at the launch site from March to May. The safety and reliability of all the instruments have been significantly improved.
"[The launch site] has the full conditions to conduct the Tiangong-1 mission," said Cui.
The Tiangong-1 will remain in orbit for two years. During its mission, it will dock with China's Shenzhou-8, -9 and -10 spacecrafts.
Unmanned docking procedures will be an essential step toward China achieving its goal of establishing a manned space station around 2020.
*Link for This article compiled by Roger Smith from reliable sources Xinhua
*Speaking Image - Creation of DTN News ~ Defense Technology News
*This article is being posted from Toronto, Canada By DTN News ~ Defense-Technology News
Contact:
dtnnews@ymail.com 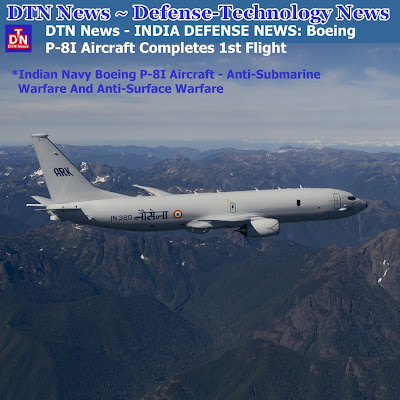 During the flight, Boeing test pilots performed airborne systems checks including engine accelerations and decelerations and autopilot flight modes, and took the P-8I to a maximum altitude of 41,000 feet prior to landing. In the coming weeks Boeing will begin mission systems installation and checkout work on the aircraft at a company facility near Boeing Field.
"The P-8I program is progressing well and we are looking forward to this potent platform joining the Indian Navy as part of its fleet," said Rear Adm. DM Sudan, assistant chief of Naval Staff (Air), Indian Navy.
"The P-8I will provide India with the necessary speed and reliability to satisfy the Indian Navy's maritime reconnaissance and anti-submarine warfare requirements," said Dinesh Keskar, Boeing India president.
Based on the Boeing Next-Generation 737 commercial airplane, the P-8I is the Indian Navy variant of the P-8A Poseidon that Boeing is developing for the U.S. Navy. In order to efficiently design and build P-8 aircraft, the Boeing-led team is using a first-in-industry, in-line production process that draws on the company's Next-Generation 737 production system.
"Flying the first P-8 for an international customer is a key milestone for our entire team," said Leland Wight, Boeing P-8I program manager. "We have transitioned to P-8I production, and remain on track to deliver the first aircraft to the Indian Navy in 2013."
The P-8I is the first of eight long-range maritime reconnaissance and anti-submarine warfare aircraft Boeing is building for India as part of a contract awarded in January 2009. An option for four additional P-8I aircraft was included in the original contract.
The aircraft features open system architecture, advanced sensor and display technologies, and a worldwide base of suppliers, parts and support equipment.
In January 2008, Boeing proposed the P-8I, a customized export variant of the P-8A, for the Indian Navy. On 4 January 2009, India's Ministry of Defence signed an agreement with Boeing for the supply of eight P-8Is at a total cost of US$2.1 billion. These aircraft would replace Indian Navy's aging Tupolev Tu-142M maritime surveillance turboprops. Each aircraft will cost about US$220 million. The deal makes India the first international customer of the P-8, and also marks Boeing's first military sale to India. On 4 October 2010, India's Defence Acquisition Council of the Ministry of Defence cleared the purchase of four additional P-8Is. The contract details for the additional aircraft was concluded in 2010, and approved by India in March 2011 bringing the total number of aircraft on order to 12.
The Data Link II communications technology for the P-8I was received by Boeing from Bharat Electronics Limited in April 2010. The communications system will enable exchange of tactical data and messages between Indian Navy aircraft, ships and shore establishments. Boeing will install the system during P-8I final assembly. The IFF, system from BEL was also handed over to Boeing for integration with P-8I in December 2010. Deliveries of P-8Is are to begin in 2013.
The P-8I is built by a Boeing-led industry team that includes CFM International, Northrop Grumman, Raytheon, Spirit AeroSystems, BAE Systems and GE Aviation.
Boeing, the world's leading aerospace company and the largest manufacturer of commercial jetliners and military aircraft combined, has significantly expanded its footprint in India in both civil aviation and defense. India has selected the P-8I to fulfill its long-range maritime reconnaissance and anti-submarine requirements and the C-17 Globemaster III for its strategic and tactical airlift needs.
Boeing is partnering with India’s leading technology and manufacturing companies to build a supply chain out of India. The company has opened a Research and Technology center in Bengaluru to collaborate with India's technical talent for research in aero structures, materials and network systems. Boeing also has an Analysis & Experimentation Center (AEC) in Bangaluru, which in partnership with Bharat Electronics Limited (BEL) provides modeling, analysis capability and defense experimentation in support of the Indian Armed Forces. Boeing India's corporate office is in New Delhi. For more information on Boeing India, visit www.boeing.co.in.

A unit of The Boeing Company, Boeing Defense, Space & Security is one of the world's largest defense, space and security businesses specializing in innovative and capabilities-driven customer solutions, and the world's largest and most versatile manufacturer of military aircraft. Headquartered in St. Louis, Boeing Defense, Space & Security is a $32 billion business with 64,000 employees worldwide. Follow us on Twitter: @BoeingDefense. 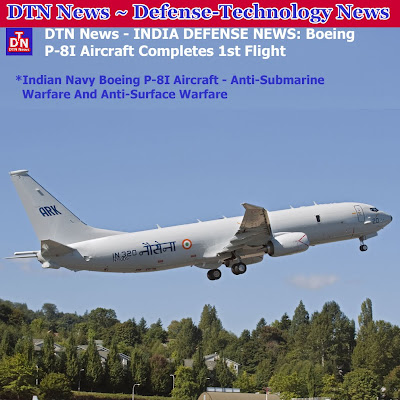 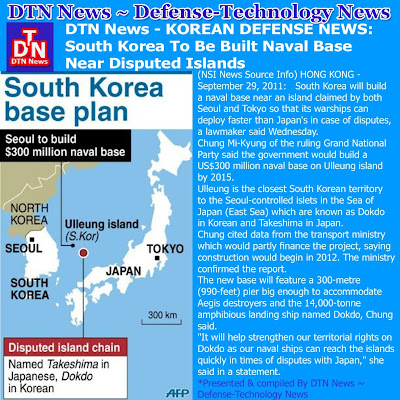 (NSI News Source Info) HONG KONG - September 29, 2011: South Korea will build a naval base near an island claimed by both Seoul and Tokyo so that its warships can deploy faster than Japan's in case of disputes, a lawmaker said Wednesday.
Chung Mi-Kyung of the ruling Grand National Party said the government would build a US$300 million naval base on Ulleung island by 2015.
Ulleung is the closest South Korean territory to the Seoul-controlled islets in the Sea of Japan (East Sea) which are known as Dokdo in Korean and Takeshima in Japan.
Chung cited data from the transport ministry which would partly finance the project, saying construction would begin in 2012. The ministry confirmed the report.
The new base will feature a 300-metre (990-feet) pier big enough to accommodate Aegis destroyers and the 14,000-tonne amphibious landing ship named Dokdo, Chung said.
"It will help strengthen our territorial rights on Dokdo as our naval ships can reach the islands quickly in times of disputes with Japan," she said in a statement.
Once the base is complete, Seoul would be able to send its ship to Dokdo in an hour and a half compared to the current four hours, she said. Japan's ships would take about three hours.
South Korea has for decades deployed a small marine police force on the rocky islets.
The dispute over them flared up again in June when Korean Air mounted a test flight of its new aircraft over Dokdo. Tokyo in response ordered its public servants to boycott Korean Air for a month.
Three conservative Tokyo lawmakers who intended to visit Ulleung to reassert their country's claim to Dokdo were refused permission to enter South Korea in early August.
South Korea the same month lodged a strong diplomatic protest against Japan's 2011 defence white paper, which describes the islands as Japanese territory.
Older South Koreans still have bitter memories of Japan's harsh colonial role over Korea from 1910-45.
*Link for This article compiled by Roger Smith - DTN News
*Speaking Image - Creation of DTN News ~ Defense Technology News
*This article is being posted from Toronto, Canada By DTN News ~ Defense-Technology News
Contact:
dtnnews@ymail.com 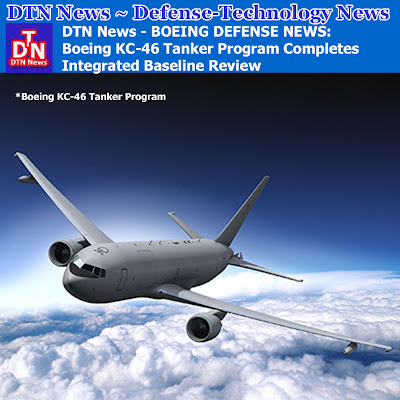 "We remain on plan with the KC-46 development program from a technical, schedule and cost perspective," said Maureen Dougherty, Boeing vice president and KC-46 Tanker program manager. "The IBR process reinforces that we have the right technical baseline, management approach and staffing levels in place to execute this contract. We're well positioned to deliver our first 18 combat-ready tankers in 78 months."
With IBR complete, the program now will focus on milestones that include a Preliminary Design Review in the first quarter of 2012, a Critical Design Review in the third quarter of 2013, and the KC-46 tanker's first flight in early 2015.
Since contract award on Feb. 24, Boeing's KC-46 Tanker program has completed the Air Force System Requirements Review as well as the 767-2C Provisioned Freighter Preliminary Design Review and Firm Configuration. The latter review marks the end of the preliminary configuration development phase for the Boeing commercial airplane on which the KC-46 tanker is based.
Boeing received a contract to build 179 next-generation aerial refueling tanker aircraft that will begin to replace the Air Force's fleet of 416 KC-135 tankers. The contract calls for Boeing to design, develop, manufacture and deliver 18 initial combat-ready tankers by 2017.
Based on the proven Boeing 767 commercial airplane, the KC-46 tanker is a widebody, multi-mission aircraft updated with the latest and most advanced technology to meet the demanding mission requirements of the future, including a digital flight deck featuring Boeing 787 Dreamliner electronic displays and a flight control design philosophy that places aircrews in command to maximize combat maneuverability. The KC-46 also features a modernized KC-10 boom with a fly-by-wire control system, and a refueling envelope and fuel offload rate that is greater than the KC-135 it will replace.
A unit of The Boeing Company, Boeing Defense, Space & Security is one of the world's largest defense, space and security businesses specializing in innovative and capabilities-driven customer solutions, and the world's largest and most versatile manufacturer of military aircraft. Headquartered in St. Louis, Boeing Defense, Space & Security is a $32 billion business with 64,000 employees worldwide. Follow us on Twitter: @BoeingDefense.
Boeing Related News;
*Link for This article compiled by Roger Smith from reliable sources Boeing
*Speaking Image - Creation of DTN News ~ Defense Technology News
*This article is being posted from Toronto, Canada By DTN News ~ Defense-Technology News
Contact:
dtnnews@ymail.com