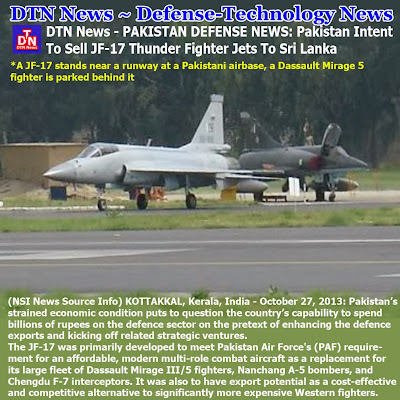 The JF-17 was primarily developed to meet Pakistan Air Force's (PAF) requirement for an affordable, modern multi-role combat aircraft as a replacement for its large fleet of Dassault Mirage III/5 fighters, Nanchang A-5 bombers, and Chengdu F-7 interceptors. It was also to have export potential as a cost-effective and competitive alternative to significantly more expensive Western fighters.

In 1999, Pakistan and China signed the contract to jointly develop the FC-1/Super 7. Initial difficulties in acquiring an avionics and radar package from Europe led to many problems, solved in 2001, when design of the airframe was decoupled from the avionics. In 2003, the maiden flight of the first prototype occurred in China. The Pakistani designation "Super-7", meanwhile, were replaced with "JF-17". Later test flights with a modified design occurred in 2006. Deliveries to the PAF for further flight testing and evaluation began in 2007 and the aircraft's first public aerial display took place that year in Islamabad. The PAF officially inducted its first JF-17 squadron, No. 26 Squadron, on 18 February 2010 with fourteen aircraft.

While the country grapples with worst kind of economic crises owing to crippled industry due to ever-rising inflation, increasing cost of industrial expenditures following massive hike in power tariff as well as security situation, billions of rupees are reportedly being pumped in the strategic projects without any accurate anticipation whether such kind of large-scale investment at the cost of public money would bear any fruit.

Some reports suggest that Pakistan intends to export sophisticated JF-17 Thunder fighter jets to certain countries by next year and $ 100 million (over 10 billion rupees) have been released in this regard. Interestingly, this reported amount is more than four times the size of funds allocated to Pakistan’s defence production sector (2.3 billion rupees) in this year’s fiscal budget. In the defence budget for the ongoing year, there is no mention of any prioritised project in the Defence Production Division suggesting the exports of JF-17 Thunder and the allocation of over Rs 10 billion for related expenses.

The budgetary allocations for defence and defence production sectors for the fiscal year 2013-14 suggest, of the Rs 627 billion defence budget, the Defence Division has received Rs 4.2 billion and the Defence Production Division, Rs 2.300 billion. Separately, the Ministry of Defence (MoD) and Ministry of Defence Production (MoDP) have respectively got Rs 1.3 billion and Rs 5.8 billion. Pakistan Army has got Rs 310 billion in this year’s fiscal budget, which is almost 50 percent of the total defence budget for 2013-14. The PAF got Rs 131 billion that makes 21 percent of the Rs 627 billion defence budget while Pakistan Navy got Rs 63 billion, around 10 percent of the defence funds. Pakistan Atomic Energy Commission (PAEC) got Rs 6.2 billion.

Adding to the mystery shrouding reported plans for exporting JF-17 Thunder, the top government functionaries concerned have kept conspicuous mum over the issue. This correspondent called Rana Tanvir Hussain, Federal Minister for Defence Production thrice at his personal cell number on Friday to get his viewpoint on the issue but he did not speak. His personal assistant Muhammad Bilal said the minister was in a meeting with Governor Punjab Chaudhry Muhammad Sarwar and was not available for comments.

Information Minister Pervaiz Rashid, on contact, expressed inability to comment on the issue saying the matter was not known to him. “Frankly speaking, I haven’t heard of any such development. How can I say anything without having proper knowledge?”

The Secretary Defence Production Lieutenant General (r) Tanvir Tahir was called at his official landline number 051-9270930 but he, according to his staff, was not in the office.

Jointly manufactured by Aviation Industry Corp of China and the Pakistan Aeronautical Complex (PAC), JF-17 Thunder is originally a Chinese product, with the related technology shifted to Pakistan in the recent years.  Regarded as a third-generation multipurpose combat jet, the JF-17 Thunder, in technical terms, is known as FC-1 Fierce Dragon.

In an interview with a Chinese news agency in May this year, Chairman PAC Air Marshal Sohail Gul Khan had claimed that several countries were interested in buying JF-17 Thunder from Pakistan. The PAC manufactured more than 40 JF-17 Thunder aircraft, he had said

The recent media reports claim Pakistan is to export five to seven JF-17 Thunder jets to the countries like Sri Lanka, Kuwait and Qatar and related deliberations are under way.

Requesting anonymity, a retired air marshal said, the manufacturing cost incurred on JF-17 Thunder is 1.5 billion to two billion rupees, roughly. “It needs to be determined whether there is a significant room for exporting this aircraft and earning profit after incurring such huge amount of money,” he said.   Pakistan’s current defence budget of Rs 627 billion has seen 15 percent surge compared to the last year’s defence budget of Rs 545 billion that was revised at Rs 570 billion.

Source: DTN News - - This article compiled by K. V. Seth from reliable sources US DoD +
(NSI News Source Info) KOTTAKKAL, Kerala, India - October 27, 2013: Navy Day was established on October 27, 1922 by the Navy League of the United States. Although it was not a national holiday, Navy Day received special attention from President Warren Harding. Harding wrote to the Secretary of the Navy Edwin Denby: 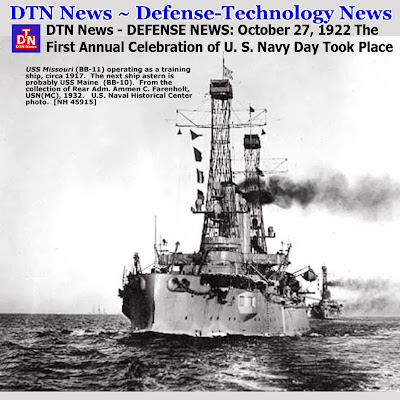 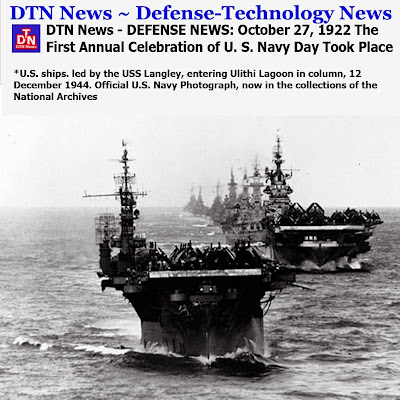 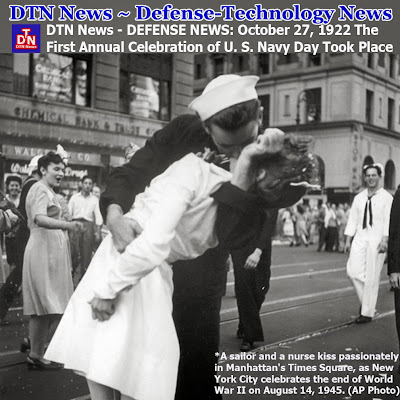 "Thank you for your note which brings assurance of the notable success which seems certain to attend the celebration of Navy Day on Friday, October 27, in commemoration of past and present services of the Navy. From our earliest national beginnings the Navy has always been, and deserved to be, an object of special pride to the American people. Its record is indeed one to inspire such sentiments, and I am very sure that such a commemoration as is planned will be a timely reminder."

"It is well for us to have in mind that under a program of lessening naval armaments there is a greater reason for maintaining the highest efficiency, fitness and morale in this branch of the national defensive service. I know how earnestly the Navy personnel are devoted to this idea and want you to be assured of my hearty concurrence."

October 27 was suggested by the Navy League to recognize Theodore Roosevelt's birthday. Roosevelt had been an Assistant Secretary of the Navy and supported a strong Navy as well as the idea of Navy Day. In addition, October 27 was the anniversary of a 1775 report issued by a special committee of the Continental Congress favoring the purchase of merchant ships as the foundation of an American Navy.

It is the force that gives America the ability to project military power around the world. Although the Navy has been out of the spotlight after a couple of decades of land wars, it is expected to play a bigger role given America’s Pacific pivot and growing reluctance to deploy troops.

“You’re going to see a much greater emphasis on using sea-based forces to produce an effect,” Admiral Gary Roughead told Reuters. “You’re seeing it in the Mediterranean, with Syria, and you’re seeing it in the Pacific and the Middle East.”
To celebrate America’s Navy, we’ve pulled out some of the coolest photos from the archives.