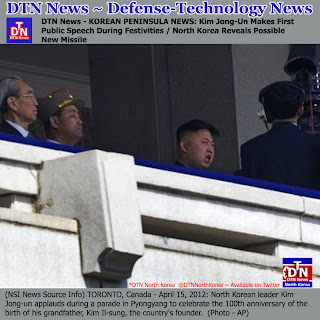 The missile was shown on Sunday during celebrations for the centennial of the birth of the late North Korean foundeinternational worries heightened by the country's simultaneous development of nuclear weapons. Kim Il-sung, Kim Jong-un's grandfather. It is a possible addition to an arsenal that has raised

Kim Jong-un, who took over as supreme leader after the death in December of his father, Kim Jong-il, spoke publicly for the first time Sunday, just two days after a failed rocket launch. He praised his father's "military first" policy.
Kim, who had been seen but not publicly heard before Sunday, stepped to the podium to speak before tens of thousands of people gathered in Pyongyang's main square for meticulously choreographed festivities meant to glorify his grandfather.
Kim said the era when nuclear arms could be used to threaten his country was "forever over." He called for strengthening the country's "military first" policy by placing the "first, second and third" priorities on military might.
He said his country had built a "mighty military" capable of both offence and defence in any type of modern warfare.
"Superiority in military technology is no longer monopolized by imperialists," he said. Soldiers are more important than rockets and artillery, Kim said, and military officers should treat their troops "like brothers and sisters."

He said he is "heartbroken" that the rival Koreas have been divided for decades, and said North Korea "will co-operate with anyone" who truly wishes for reunification.
North Korea defied the U.S. and others Friday by firing a long-range rocket that space officials said was mounted with an observational satellite despite warnings against pushing ahead with the provocative launch. Washington and others say it was a covert test of long-range missile technology.
Hours after the rocket splintered into pieces over the Yellow Sea, the country made an unusual admission of failure, but Kim did not mention the launch in his remarks Sunday.
Kim has since underlined the country's "military first" policy with a budget that allocates a sizable chunk of funding to defence spending.
International condemnation of the rocket firing was swift, including the suspension of U.S. food aid, and there are worries that the North's next move could be an even more provocative nuclear test.
The United Nations Security Council denounced the launch as a violation of resolutions that prohibit North Korea from developing its nuclear and missile programs. The council imposed sanctions on North Korea after its first nuclear test in 2006 and stepped up sanctions after its second in 2009. 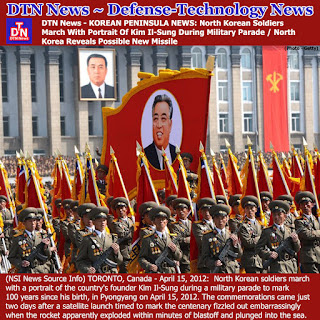 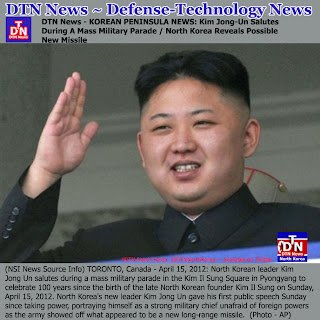 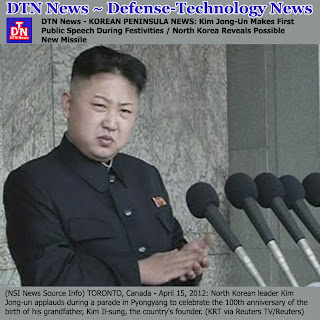