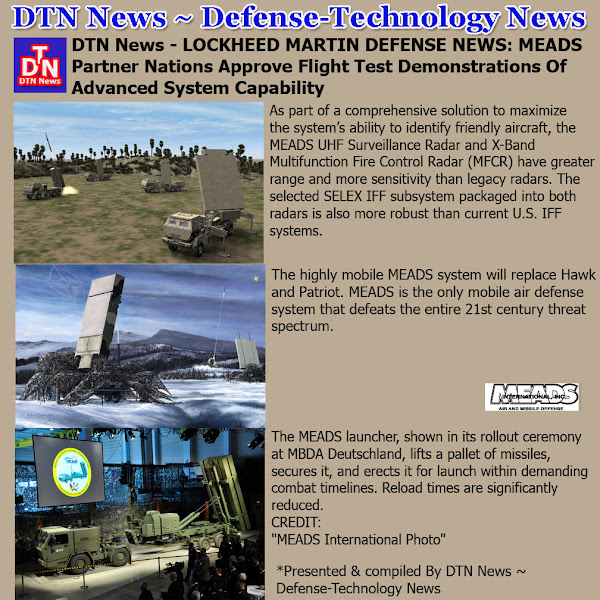 The refocused development program ensures that key national technologies will be demonstrated and that MEADS will readily mature into the advanced and effective terminal-phase air and missile defense system specified by Germany and Italy, and a viable option for U.S. procurement.
MEADS International (MI) President David Berganini said, “MEADS is a highly robust and flexible system, and that is why it is so important to keep this system moving forward. For example, with just a battle manager, launcher and fire control radar, MEADS provides full 360-degree protection against evolved threats at longer range than any system available today. Additionally, plug-and-fight capability lets other assets seamlessly join the network.”
MEADS is designed to provide full 360-degree protection and to defeat the emerging threat spectrum. It can defend up to eight times the coverage area of current sectored systems while using far fewer system assets. This allows for a substantial reduction in deployed personnel and equipment, with less demand for airlift, which significantly reduces overall system operation and support costs.
The revolutionary network-centric battle manager allows any combination of sensors and launchers to form an Air and Missile Defense battle element for specific mission objectives. Through this capability, MEADS can become the hub for national air and missile defense networks.
MEADS International, the MEADS prime contractor, worked with its NATO MEADS Management Agency (NAMEADSMA) customer to define and prioritize program objectives within authorized funding. By 2014, MI will finalize and demonstrate the MEADS system design and capabilities through modeling, demonstrations and three flight tests with two being intercepts. The scope adds nation-unique follow-on activities to complete system development.
NAMEADSMA General Manager Gregory Kee said, “Because of its advanced capabilities, there is international interest in MEADS. In budget-constrained times, nations need a capability that is modern, operationally more capable than existing systems, and with reduced manning requirements and lower operational costs. MEADS will offer the most advanced terminal-phase air and missile defense technology available at the conclusion of this revised design and development program.”
To support final system integration and flight test activities, MI has taken ownership of facilities at White Sands Missile Range, N.M. Test personnel will move onto the range in May to implement the development test program.
MEADS incorporates the hit-to-kill PAC-3 MSE Missile in a system that includes 360-degree radars, netted-distributed battle management/communication centers and high-firepower launchers. The system design combines superior battlefield protection with extensive flexibility, allowing it to protect forces and critical assets against tactical ballistic missiles, cruise missiles, unmanned aerial vehicles and aircraft.
MEADS also provides an open architecture for 21st century air and missile defense system-of-system integration capabilities that allow operational mission-tailoring. MEADS is designed to provide greater firepower with less manpower than current systems, producing dramatic operation and support cost savings.
MEADS International, a multinational joint venture headquartered in Orlando, Fla., is the prime contractor for the MEADS system. Major subcontractors and joint venture partners are MBDA in Italy, LFK in Germany and Lockheed Martin in the United States.
The program completed Critical Design Review in August 2010 and has entered the proof of concept test phase that will culminate in two intercept flight tests. Under the Design and Development Memorandum of Understanding, the United States funds 58 percent of the program, and European partners Germany and Italy provide 25 percent and 17 percent respectively as partners in the NATO Medium Extended Air Defense System Management Organization (NAMEADSMO). Its program management agency NAMEADSMA is located in Huntsville, Ala.
Craig Vanbebber, (972) 603-1615
email craig.vanbebber@lmco.com

MEADS will provide capabilities beyond any other fielded or planned air and missile defense system. It will be easily deployed to a theater of operations and once there, will keep pace with fast-moving maneuver forces. MEADS will provide an open architecture for 21st century air and missile defense system-of-system integration capabilities that allow operational mission-tailoring. MEADS will also provide greater firepower with less manpower than current systems, producing dramatic operation and support cost savings.

A multinational joint venture headquartered in Orlando, FL, MEADS International's participating companies are MBDA in Italy, LFK in Germany and Lockheed Martin in the United States. Today, 1800 employees from these companies are completing final engineering designs for MEADS program, which is closely watched as a model for collaborative transatlantic development.

DTN News - INDIA DEFENSE NEWS: Indian Navy To Procure New Multi Role Helicopters
**Indian Navy has narrowed down to two contenders, Sikorsky SH-60/MH-60 Seahawk and NHI NH90 for purchase of 16 new Naval Multi Role Helicopters (NMRH) for anti-submarine, anti-surface and Special Commando operations roles.
-The Sikorsky SH-60/MH-60 Seahawk (or Sea Hawk) is a twin turboshaft engine, multi-mission United States Navy helicopter based on the United States Army UH-60 Black Hawk and a member of the Sikorsky S-70 family. The most significant airframe modification is a hinged tail to reduce its footprint aboard ships.
-The NHI NH90 is a medium sized, twin-engine, multi-role military helicopter manufactured by NHIndustries. The first prototype had its maiden flight in December 1995. It has been ordered by 16 nations, and deliveries began in 2006. 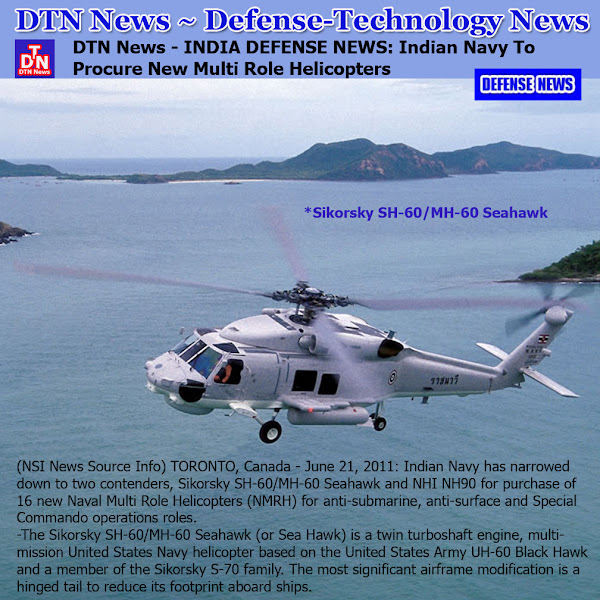 Interestingly, the Navy has shown its intent to procure these choppers at a time when it is already planning to start the trials for buying 16 MRHs from the two contenders Sikorsky S-70B and European NH-90 next month under a separate tender. 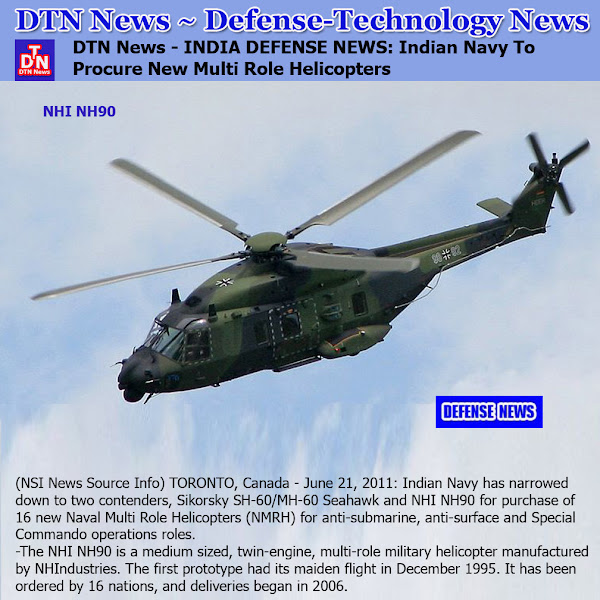 Navy officials told PTI that the earlier tender process will continue and the trials would be carried out as per the original schedule.
In its requirement for the next batch of helicopters, the navy stated that the basic chopper for performing all the specified roles should be same with common airframe, engines, avionics and it should be capable of changing roles with ease.
"The NMRH should be of contemporary design with modern, reliable and fuel efficient engines and fully integrated advanced avionics and weapons suite employing the latest concepts for detection, identification, classification of surface and subsurface targets along with the ability to detect air targets," it said in the RFI document.
The Navy also wants the chopper to have the air to air refuelling capability for enhanced endurance and reach.
The vendors taking part in the contract will also be required to invest back at least 30 per cent of the worth of the contract as offsets into the Indian defence, civilian aerospace or the homeland security sectors.
Possible contenders for the deal include NH-90, Sikorsky and Lockheed martin's MH-60 Romeo, which was not selected for the early tender as it was being offered through the Foreign Military Sales route.
The navy at present relies on its fleet of Sea King helicopters which were inducted in tow different phases in the 80s.
*Link for This article compiled by Roger Smith from reliable sources DTN Defense News
*Speaking Image - Creation of DTN News ~ Defense Technology News
*This article is being posted from Toronto, Canada By DTN News ~ Defense-Technology News
Contact:
dtnnews@ymail.com 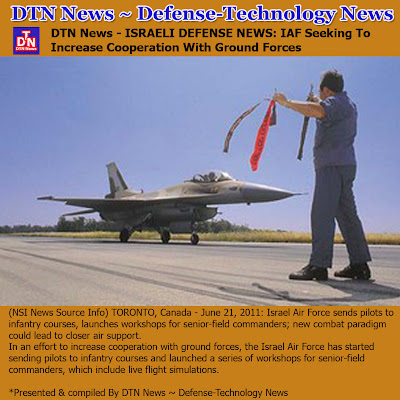 As an example, the incoming commander of the Hatzor Air Force Base near Ashdod recently completed the IDF Brigade Commanders Course and two pilots – one female – are currently participating in the Company Commanders Course.
Other initiatives include “ground week” for pilots who are sent for a week to the Ze’elim Training Base in the Negev Desert, where they trek with infantry troops, ride in tanks and armored personnel carriers and assault “enemy” positions.
The increase in joint training is part of a new training regimen developed earlier this year by the IAF’s Helicopter Directorate and the Ground Forces Command, called “Partners in Training.”
As part of the new training regimen, all IDF officers participating in the Brigade Commanders Course receive a flight aboard an attack helicopter, or a fighter jet.
“The idea is to try and focus the ground forces so that they can prioritize what is most important for them to receive from the IAF for training and during operations,” a senior air force officer explained recently.
Earlier this month, the IAF hosted the entire top brass of one of the IDF’s key divisions for a workshop at one of its bases.
During the day, the officers watched videos showing them how pilots see the battlefield from their cockpits, and discuss various ways of improving coordination. The officers then go into the field and run a live exercise during which they try to direct fighter jets to a nearby target.
“By training together and developing a common language, we will know how to work better in the future,” the officer said.
The increase in cooperation and the creation of a common language is expected to eventually enable field commanders to receive closer air support than before.
During the Second Lebanon War in 2006, and Operation Cast Lead in the Gaza Strip in 2009, the IDF operated with a safety buffer of hundreds of meters that had to be in place between troops and the target that they were asking the air force to bomb. The concern is that the field commanders and pilots will not understand one another, and accidentally lead to an attack on friendly forces.
The senior IAF officer said that with the increase in cooperation and understanding between the different branches, it was possible that the buffer would be reduced to enable closer air support.
“The buffer is not a wall that cannot be crossed,” the officer said. “When there are cases of real cooperation that we know for sure where all the forces are located, there are ways to provide extremely close support.”
RELATED: IAF discussing sending pilots to US for F-35 training Flying high with the Air Force's 105 squadron
*Link for This article compiled by Roger Smith from reliable sources Yaakov Katz - Jerusalem Post
*Speaking Image - Creation of DTN News ~ Defense Technology News
*This article is being posted from Toronto, Canada By DTN News ~ Defense-Technology News
Contact:
dtnnews@ymail.com