CONTRACTS
Missile Defense Agency
Raytheon Integrated Defense Systems, Woburn, Mass. is being awarded a sole-source, cost-plus-incentive-fee, and cost-plus-fixed-fee contract modification to HQ0147-12-C-0005 under a foreign military sales (FMS) case to the United Arab Emirates (UAE), to provide software updates, contractor logistic support, radar repair and return and technical services on the AN/TPY-2 radars being delivered as part of a whole FMS case as an element of the Terminal High Altitude Area Defense (THAAD) system.  The value of this effort is $83,785,417.  Work will be performed in Woburn, Mass., White Sands Missile Range, N.M., and UAE.  The period of performance is through Sept. 30, 2018.  UAE FMS funds in the amount of $83,785,417 will be used to fund this effort.  The Missile Defense Agency, Huntsville, Ala., is the contracting activity (HQ0147).

Air Force
Boeing Co., McDonnell Douglas Corp., St. Louis, Mo., has been awarded a not-to-exceed amount of $75,598,874 firm-fixed-price and cost-reimbursable contract (FA3002-13-D-0012) for courseware development as well as initial and differences training necessary to transition from other F-15 variants to the unique, non-commercial F-15SA weapon system for the Royal Saudi Air Force.  Work will be performed in St. Louis, Mo., and King Khalid Air Base, Khamis Mushayt, Kingdom of Saudi Arabia.  This is a sole-source acquisition.  Fiscal 2011 international funding will be used in this multiyear (100 percent), FMS contract, and FMS customer is The Air Force Security Assistance Training Squadron.  Work is expected to be completed by July 19, 2019.  Air Education and Training Command Contracting Squadron/LGCI (International Contracting Flight), Randolph Air Force Base, Texas, is the contracting activity.

Navy
Tetra Tech Inc., Arlington, Va. (N62470-D-13-8016); GMI-AECOM Joint Venture, Plano, Texas (N62470-D-13-8017); CH2M Hill Inc., Virginia Beach, Va. (N62470-D-13-8018), are each being awarded a firm-fixed-price, indefinite-delivery/indefinite-quantity multiple award contract for various tasks to accomplish natural resource services and compliance and related environmental planning services in support of the U.S. Navy.  The maximum dollar value for all three contracts combined is $75,000,000.  These three contractors may compete for task orders under the terms and conditions of the awarded contract.  No task orders are being issued at this time.  Work will be performed at various Navy, Marine Corps and other sites primarily within the Naval Facilities Engineering Command Atlantic area of responsibility, but also worldwide.  The term of the contract is not to exceed 60 months, with an expected completion date of July 2018.  Fiscal 2013 Naval Environmental Protection Support Service contract funds in the amount of $15,000 are obligated on this award and will expire at the end of the current fiscal year.  This contract was competitively procured via the Navy Electronic Commerce Online website, with seven proposals received.  The Naval Facilities Engineering Command, Atlantic, Norfolk, Va., is the contracting activity.

BOSH Global Services*, Newport News, Va. (N65236-13-D-5840); Imagine One StraCon Venture LLC*, Fort Worth, Texas (N65236-13-D-5841); ISHPI Information Technologies Inc.*, Mount Pleasant, S.C. (N65236-13-D-5842); Sentek Global*, San Diego, Calif. (N65236-13-D-5843); Skylla Engineering Ltd.*, Humble, Texas (N65236-13-D-5844); and Chugach Federal Solution Inc.*, Anchorage, Alaska (N65236-13-D-5858) are each being awarded an indefinite-delivery/indefinite-quantity, cost-plus-fixed-fee, with provisions for fixed-price-incentive (firm target) and firm-fixed-price task orders, performance based multiple award contract.  The contracts are for the procurement of decision superiority services including the entire spectrum of non-inherently governmental services and solutions (equipment and services) associated with the full system lifecycle support including research, development, test, evaluation, production and fielding of sustainable, secure, survivable, and interoperable command, control, communications, computers, combat systems, intelligence, surveillance, reconnaissance, information operations, enterprise information services and space capabilities.  The combined cumulative, estimated value of the base year is $19,752,906.  These contracts include options which, if exercised, would bring the cumulative value of these multiple award contracts to an estimated $98,764,531.  Work will be performed worldwide as task orders are issued, and is expected to be completed by July 2014.  If all options are exercised, work could continue until July 2018.  SPAWAR Systems Center Atlantic Navy Working Capital funds in the amount of $10,000 will be obligated at the time of award as the minimum guarantee and will be split among the six awardees; these funds will not expire at the end of the current fiscal year.  This contract action establishes a potential ceiling value, in which funds are obligated on individual task orders for efforts that fall within the core competency areas. The multiple award contracts were competitively procured by full and open competition after exclusion of sources (8(a) set-aside) via the Space and Naval Warfare Systems Center e-Commerce Central website and the Federal Business Opportunities website, with 13 offers received.  The Space and Naval Warfare Systems Center Atlantic, Charleston, S.C., is the contracting activity.

The Boeing Co., St. Louis, Mo., is being awarded a $17,001,833 cost-plus-incentive-fee, cost-plus-fixed-fee delivery order (#2049) against a previously issued Basic Ordering Agreement (N00019-11-G-0001) for phase I of the next generation jammer (NGJ) pod hardware integration in support of the EA-18G aircraft.  The phase I hardware integration will ensure the development, preparation and delivery of the aircraft modification design is suitable for the technology development stage of the NGJ pod program.  Work will be performed in St. Louis, Mo., and is expected to be completed in October 2014.  Fiscal 2013 research, development, test & evaluation, Navy contract funds in the amount of $10,000,000 will be obligated at time of award, none of which will expire at the end of the current fiscal year.  The Naval Air Systems Command, Patuxent River, Md., is the contracting activity.

General Electric Co., Lynn, Mass., is being awarded a $15,691,247 cost-plus-fixed-fee contract for the procurement of time critical parts for incorporation into the T-408-GE-400 gas turbine engine in support of the CH-53K helicopter program.  Work will be performed in Lynn, Mass., and is expected to be completed in December 2016.  Fiscal 2013 research, development, test & evaluation, Navy contract funds in the amount of $15,691,247 will be obligated at time of award, none of which will expire at the end of the current fiscal year.  This contract was not competitively procured pursuant to FAR 6.302-2-1(a)(1).  The Naval Air Systems Command, Patuxent River, Md., is the contracting activity (N00019-13-C-0132).

U.S. Special Operations Command
Northrop Grumman Technical Services Inc., Herndon, Va., was awarded a $12,915,678 cost-plus-fixed-fee contract to provide exercise and training support to command staff, battle staff, and Theater Special Operations Commands.  The majority of the work will be accomplished at MacDill Air Force Base, Fla., (80 percent), the remainder of the work will be performed at various exercise locations throughout the United States and overseas locations.  The term of the contract is not to exceed 12 months with an expected completion date of June 2014.  Fiscal 2013 operations and maintenance funds are being used.  This contract was competed sole source, with only one proposal solicited and received.  Headquarters U.S. Special Operations Command, MacDill Air Force Base, Fla., is the contracting activity (H92222-13-C-0045).

Source: DTN News - - This article compiled by Roger Smith from reliable sources EADS
(NSI News Source Info) TORONTO, Canada - July 17, 2013: The contract, worth a total of 194 million euros, includes not just the helicopters but also the related equipment packages to allow KSK to carry out its special operations missions. Deliveries of the 15 aircraft begin in late 2015 and will be completed by mid-2017. 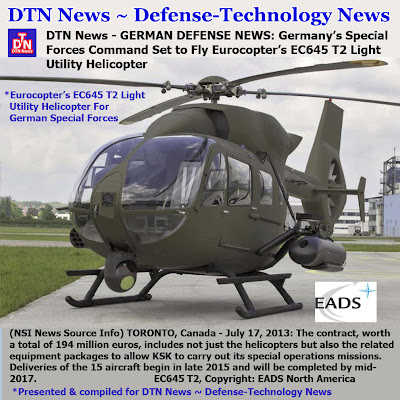 “By selecting the EC645 T2, the Bundeswehr is setting an international benchmark,” explained Wolfgang Schoder, CEO of Eurocopter Germany, during the contract signing. “They are putting their faith in proven technologies from missions around the world. Among others, the U.S. Army successfully operates a fleet of more than 270 EC145s, the aircraft on which the EC645 T2 is based. This helicopter is an economical, low-risk and quickly available solution to carry out missions for special forces that has already won out several times against international competition.”

The LUH contract enhances the Special Forces Command’s operational capability. The day and night missions that these helicopters will perform include insertion and extraction of special ops, fire support and reconnaissance.

The EC645 T2 LUH features a modern digital cockpit with full night vision and a 4-axis autopilot. Its communication equipment including tactical radios enables interoperability among NATO forces. Special ops teams can quickly access the aircraft thanks to its spacious cabin, which has two large sliding side doors and double doors at the rear. The helicopter’s maximum take-off weight is 3.7 tons. Troop safety is improved by the Fenestron shrouded tail rotor, particularly for flight operations in confined landing sites and whenever the rotor is turning on ground.

The helicopter can be strategically airlifted in an Airbus A400M and quickly prepared for the mission upon arrival in a theater of operations. 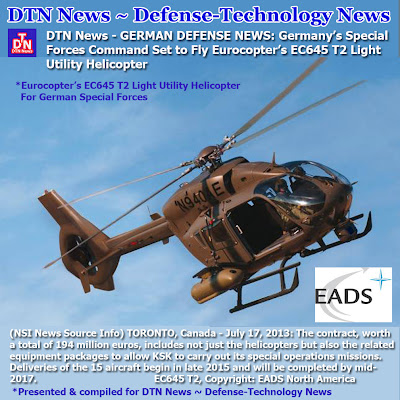 In opting for a helicopter from Eurocopter’s EC145 family, the Bundeswehr has selected a model based on one that already performs a wide variety of missions around the world, with some 600 aircraft having been delivered to more than 40 countries. One international reference for the EC145 family’s capabilities and efficiency is the U.S. Army’s LUH program, in which the EC145, designated UH-72A Lakota, has effectively performed light utility helicopter duties since 2006. Of a total order for 322 units, more than 270 aircraft have already been delivered on time and on budget. The U.S. Army has repeatedly held the UH-72A up as an example of a successful procurement program. The EC145 has also been in operation for many years by renowned customers such as France’s Sécurité Civile and Gendarmerie Nationale, Germany’s DRF air rescue organization and the German Automobile Club (ADAC), along with many armed forces and police helicopter units around the world.

In addition, the EC645 T2 offers the Bundeswehr the potential for increased synergies: given that the German Army Aviation School in Bückeburg has for many years been using the EC135 for pilot training, Eurocopter’s family concept opens up additional benefits in training, operations and logistics for these aircraft.

Established in 1992, the Franco-German-Spanish Eurocopter Group is a division of EADS, a world leader in aerospace and defense-related services. The Eurocopter Group employs approximately 22,000 people. In 2012, Eurocopter confirmed its position as the world’s No. 1 helicopter manufacturer with a turnover of 6.3 billion Euros, orders for 469 new helicopters and a 44 percent market share in the civil and parapublic sectors. Overall, the Group’s helicopters account for 33 percent of the worldwide civil and parapublic fleet. Eurocopter’s strong international presence is ensured by its subsidiaries and participations in 21 countries. Eurocopter’s worldwide network of service centers, training facilities, distributors and certified agents supports more than 2,900 customers. There are currently more than 11,780 Eurocopter helicopters in service in 148 countries. Eurocopter offers the most comprehensive civil and military helicopter range in the world and is fully committed to safety as the most important aspect of its business. 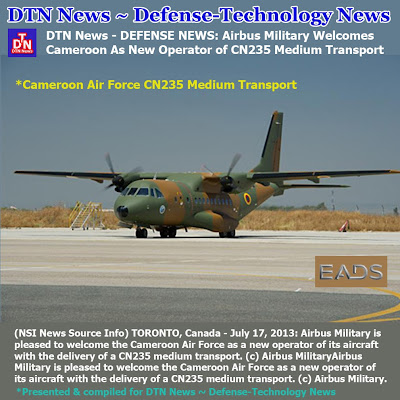 Airbus Military is pleased to welcome the Cameroon Air Force as a new operator of its aircraft with the delivery of a CN235 medium transport.

The handover makes Cameroon the sixteenth sub-Saharan nation to operate Airbus Military´s family of light and medium aircraft, underlining the range´s suitability for the challenging operating conditions found in the region.

The CN235 is a robust aircraft with a six tonne payload that is well-proven in hot, dusty and humid conditions and on unprepared runways.

It is flexible and reliable with good short take-off and landing capability, and its cabin can be easily reconfigured for a variety of transport missions such as carrying troops, cargo, mixed loads or for medical evacuation.

Versatility, and low maintenance and operating costs were key factors in the Cameroon Air Force´s selection of the CN235, which will be used to modernise its transport fleet.

A high-resolution version of the photo can be downloaded from http://bit.ly/190iS8v