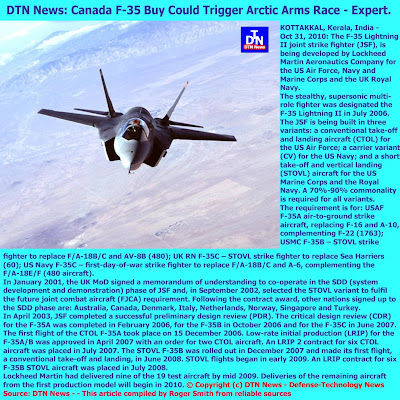 "I don't want my country to be the country that starts an Arctic arms race," Byers said as debate over the government's plan to spend $16 billion on 65 of the F-35s raged on several fronts on Parliament Hill.

Byers is chair in global politics and international law at the University of British Columbia. He said there is no need for stealth "shock and awe" military aircraft in the North and senior U.S. military officials have contradicted Canadian government claims of threats from aging Russian bombers near Canadian airspace.

What is needed up North, he emphasized, is search-and-rescue planes.

Air force chief Lt.-Gen. Andre Deschamps told the House of Commons defence committee that Russia is already building a "fifth-generation" fighter — which is what the F-35 is — and that China is expected to build one too.

If the planned purchase is cancelled, he told MPs, Canada's air force would become "irrelevant" for defence missions with the United States and other countries in the NATO military alliance, many of whom are also buying the Lockheed-Martin aircraft.

Deschamps was responding to Conservative MPs' attempts to undermine Liberal leader Michael Ignatieff's announcement Wednesday that he would cancel the project and hold a competition for a jet to replace Canada's aging CF-18 fleet.

Opposition MPs repeatedly sought assurances from Deschamps and Col. Dave Burt, acting project manager for the F-35, that there are strong controls in place to prevent a repeat of the cost overruns, significant delivery delays and lack of oversight found by the auditor general in the government's $11-billion purchase of Chinook and Cyclone helicopters and associated operating and maintenance contracts.

"We don't want to end up with this costing us $32 billion someday," said Parti Quebecois defence critic Claude Bachand.

Deschamps became testy when Bachand pressed him to provide to MPs, behind closed doors if necessary, classified information about the F-35's technical capabilities.

Burt said an F-35 project management office was set up two weeks ago and teams to oversee the project are being assembled.

Auditor General Sheila Fraser told the House of Commons public accounts committee that the military and government spending authorities will have to properly assess risks, requirements and the range of costs for operating and maintaining the F-35s.

The government has not yet signed a contract to buy the jets but expects delivery to start in 2016, gradually retiring the F-18 fleet by 2020.

Spurred by the findings on the helicopters, Fraser has decided to audit the F-35 process. Some of the Chinook costs were so underestimated that she said the military might have to reallocate funds to cover operating and maintenance costs.

*THIS ARTICLE IS BEING POSTED FROM TORONTO, CANADA BY DTN NEWS ~ DEFENSE-TECHNOLOGY NEWS, CONTACT: DTNNEWS@YMAIL.COM

*TO READ THIS ARTICLE ORIGINALITY, CLICK HERE FOR LINK.
DISCLAIMER STATEMENT
WHILST EVERY EFFORT HAS BEEN MADE TO ENSURE THE ACCURACY OF THE INFORMATION SUPPLIED HEREIN, DTN NEWS ~ DEFENSE-TECHNOLOGY NEWS CANNOT BE HELD RESPONSIBLE FOR ANY ERRORS OR OMISSIONS. UNLESS OTHERWISE INDICATED, OPINIONS EXPRESSED HEREIN ARE THOSE OF THE AUTHOR OF THE PAGE AND DO NOT NECESSARILY REPRESENT THE CORPORATE VIEWS OF DTN NEWS ~ DEFENSE-TECHNOLOGY NEWS.
Posted by Defense-Technology News at 10/30/2010 05:21:00 PM No comments: