The USAF has some of the most capable aircraft in the world within its fleet. Many of the aircraft that it fields in any conflict are older and were designed decades ago; but it also has some very capable next generation aircraft like the F-22 and the F-35 that will be coming online in the next few years. 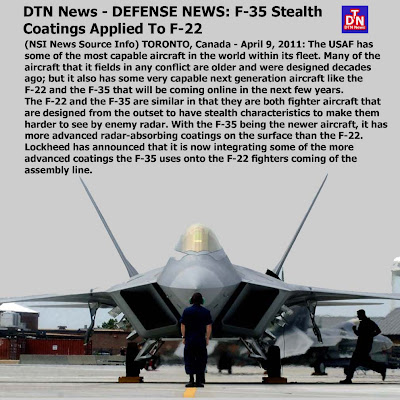 The F-22 and the F-35 are similar in that they are both fighter aircraft that are designed from the outset to have stealth characteristics to make them harder to see by enemy radar. With the F-35 being the newer aircraft, it has more advanced radar-absorbing coatings on the surface than the F-22. Lockheed has announced that it is now integrating some of the more advanced coatings the F-35 uses onto the F-22 fighters coming of the assembly line. "Some of the [low observables] coatings system and gap-fillers that the F-35 had an advantage on, we have incorporated into the Raptor," said Jeff Babione, vice president and general of the F-22 program for Lockheed Martin. Defense News reports that Babione claims that the new coatings don’t change the radar cross section of the F-22. The coatings according to Babione are simply to reduce maintenance costs. He said, "[The F-35 program] had some more robust materials that were more durable and we were able to pull those back on to the F-22. So our system is better, and the life-cycle cost of the F-22 is reduced." Analyst Dan Goure said, "It's not going to transform the airplane, but what it's going to really do is make it much cheaper to operate the F-22 fleet, which is terribly important given its small size." However, some doubt that the new coatings won't improve the radar visibility of the F-22. Goure also noted, "I would be very surprised if this wasn't an improvement in stealth characteristics." Lockheed had to make some changes to the coatings to be used on the F-22 that the F-35 didn’t require. Goure said, "It's [the F-22] operating at a higher altitude typically and [at] faster speeds, and that would put different stresses on the material." The only F-22 fighters that are using the new coating for now are the most recent Lot 9 aircraft and other new and improved materials are still in the final qualification phase. Lockheed hopes to roll the coatings out to the entire fleet next year. At that point, all existing aircraft will be retrofitted with the new coating.

The F-22 was recently left out of the fighting in Libya because it was both too advanced and too limited at the same time.

The seven countries that are funding the latest Airbus military transport aircraft have agreed on a profit-sharing formula for its export sales. 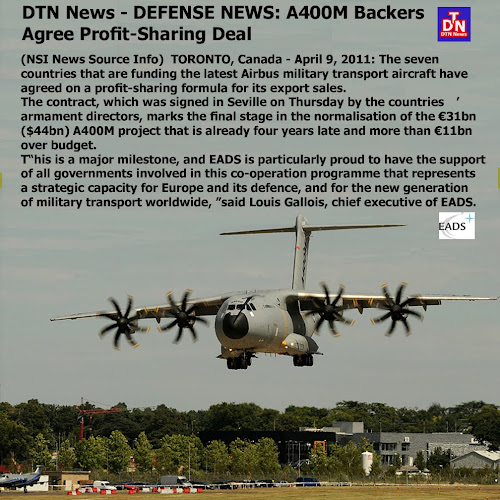 The contract, which was signed in Seville on Thursday by the countries’ armament directors, marks the final stage in the normalisation of the €31bn ($44bn) A400M project that is already four years late and more than €11bn over budget.

“This is a major milestone, and EADS is particularly proud to have the support of all governments involved in this co-operation programme that represents a strategic capacity for Europe and its defence, and for the new generation of military transport

“The A400M is a fantastic new aircraft already flying with outstanding and unrivalled capabilities.”

The original €20bn plan for the A400M was agreed by a consortium of Germany, the UK, France, Spain, Belgium, Luxembourg and Turkey to replace the Hercules C-130 and the Transall C-160. The plan had been to provide European countries with 180 heavy-lift aircraft equipped with propeller engines capable of taking off and landing in improvised airfields.

As the finances of European countries began to deteriorate two years ago and the development of the A400M hit cost overruns, EADS and its partners began wrangling over the need for a further subsidies to the project. A settlement was reached in March 2010 in which the consortium agreed to a €2bn increase in the total cost of the project.

This agreement was finalised in November last year but the details of a further €1.5bn “export levy facility” remained unresolved, even as work finally began on the A400M last month.

The terms of the ELF agreed on Thursday in Seville are not disclosed, but they set out in detail the amount that each partner nation will receive from EADS – in return for the extra €1.5bn assistance – for every additional A400M that is sold beyond the original order, which has now been reduced to 174 aircraft, including four that have been ordered by Malaysia.

EADS in talks to take over Vector Aerospace - Mar-24

EADS hopes to win work linked to US tankers - Mar-23 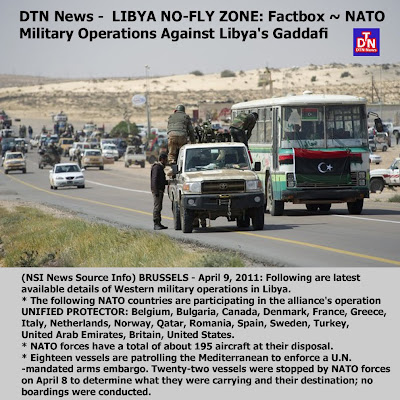 * NATO forces have a total of about 195 aircraft at their disposal.

* Since NATO assumed command of Western military operations in Libya, its aircraft have made 1,434 sorties, including 587 intended as strike missions. On April 8, it conducted 156 sorties and 60 strike missions. Not all strike sorties have led to targets being hit.

* Eighteen vessels are patrolling the Mediterranean to enforce a U.N.-mandated arms embargo. Twenty-two vessels were stopped by NATO forces on April 8 to determine what they were carrying and their destination; no boardings were conducted.

Nearly 170 vessels have been halted and six boardings conducted since the beginning of arms embargo operations.

* On Saturday, forces loyal to Muammar Gaddafi shelled the western outskirts of the rebel-held town of Ajdabiyah as fighting erupted again on the eastern front.

* The rebels said they intended to take Brega on Saturday and some had penetrated the outskirts.

* The Red Cross said on Saturday it was extending its activities to western Libya, as a ship loaded with medical supplies docked in the besieged port city of Misrata and its aid workers made their way to Zawiyah.

* It said RAF Tornado GR4 aircraft used Brimstone missiles and Paveway IV bombs in the area of Ajdabiyah, hitting two tanks, and in the area of Misratah hitting five tanks. The weapons were discharged as part of armed air reconnaissance and overwatch patrols conducted over Misratah, Brega and Ajdabiyah.

* HMS Liverpool has taken over from HMS Cumberland, undertaking surveillance and embargo operations alongside HMS Brockelsby. HMS Cumberland will now return to the UK.

* Libyan rebels said on Friday they had repelled an assault by government troops on the eastern flank of the coastal city of Misrata, but fighting forced residents to flee the area.

* British Rear Admiral Russell Harding, deputy commander of NATO operations in Libya, said on Friday 23 targets had been struck in the previous 48 hours. 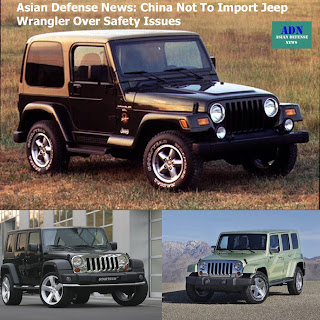 Consumers in China have reported several cases of imported Jeep Wranglers catching fire. Investigations found that the fires were the result of a problem in the vehicles' automatic transmission systems, the General Administration of Quality Supervision, Inspection and Quarantine said in a statement. The Jeep Wrangler is a four-wheel drive sport utility vehicle (SUV) manufactured by American automaker Chrysler and is now in its fourth generation. The Wrangler debuted in 1987, was revised in 1997 and again in 2007. The administration, however, did not mention whether the reported incidents resulted in casualties, according to Xinhua. It urged Chrysler to determine the cause of the problem and solve it.
*Source: China National News
*Link for This article compiled by Roger Smith from reliable sources Asian Defense News
*Speaking Image - Creation of DTN News ~ Defense Technology News
*This article is being posted from Toronto, Canada By DTN News ~ Defense-Technology News
Contact:
dtnnews@ymail.com