NAVY
Raytheon Co., Tucson, Ariz., is being awarded a $35,019,637 modification to previously awarded contract (N00024-10-C-5432) to exercise an option to accomplish fiscal 2014 design agent engineering services for the MK-31 Rolling Airframe Missile (RAM) Guided-Missile Weapon System (GMWS) improvement program support, guided-missile round pack support, and guided-missile launching system support.  The RAM MK-31 GMWS is a cooperative development and production program conducted jointly by the United States and the Federal Republic of Germany under Memoranda of Understanding.  The support is required to maintain current weapon system capability, as well as resolve issues through design, systems, software maintenance, reliability, maintainability, quality assurance and logistics engineering services.  Work will be performed in Tucson, Ariz., and is expected to be completed by September 2014.  Fiscal 2014 weapons procurement Navy; fiscal 2014 research, development, test and evaluation; fiscal 2014 operations and maintenance, Navy and German funding in the amount of $8,246,505 will be obligated at the time of contract award.  Contract funds in the amount of $733,035 will expire at the end of the current fiscal year.  The Naval Sea Systems Command, Washington, D.C., is the contracting activity (N00024-10-C-5432).

Raytheon Co., Integrated Defense Systems, Sudbury, Mass., is being awarded a $29,521,981 modification to previously awarded contract (N00024-13-C-5115) to exercise options for the production of the AN/SPY-1D(V) radar transmitter group, missile fire control system MK 99 and site support for DDG 119.  Raytheon will also be responsible for related technical services to facilitate system testing, shipyard installation, and other requirements.  Work will be performed in Andover, Mass. (78.3 percent); Sudbury, Mass. (19.3 percent); Moorestown, N.J. (0.9 percent); Norfolk, Va. (0.5 percent); and Canada (1 percent) and is expected to be completed by June 2017.  Fiscal 2013 ship conversion, Navy contract funds in the amount of $29,521,981 will be obligated at time of award and will not expire at the end of the current fiscal year.  The Naval Sea Systems Command, Washington, D.C., is the contracting activity.

Sechan Electronics Inc.*, Lititz, Pa., is being awarded a $17,212,201 firm-fixed-priced, indefinite-delivery/indefinite-quantity contract for the procurement of the Target Detecting Device (TDD) MK 71 Mod 1 to support the Quickstrike Mine Improvement program.  This contract will require the fabrication, assembly, integration, testing and delivering of the hardware components which constitute TDD MK 71 Mod 1.  TDD MK 71 Mod 1 has been developed and fielded for use in the air-delivered Quickstrike mine shape MK 65, and is also planned for use in two additional mines:  Mine MK 62 and Mine MK 63.  Work will be performed in Lititz, Pa., and is expected to be completed by December 2018.  Fiscal 2013 weapons procurement, Navy contract funds in the amount of $3,071,600 will be obligated at time of award and will expire at the end of the current fiscal year.  This contract was competitively procured via the Navy Electronic Commerce Online and the Federal Business Opportunities websites, with one offer received.  The Naval Surface Warfare Center, Panama City Division, Panama City, Fla., is the contracting activity (N61331-14-D-0001).

Air Cruisers Co., LLC, Township, N.J., is being awarded a five year $16,970,294 firm-fixed-price, indefinite-delivery/indefinite-quantity contract for the long term repair of four different sized life rafts that comprise the Multi-Place Life Raft (MPLR) Program.  The MPLR is a critical safety/critical application item designed to save and sustain the lives of Navy and Marine Corps air crewmen in the event of ejection or aircraft abandonment at sea.  Work will be performed in Liberty, Miss., and work is expected to be completed December 2018.  Fiscal 2013 Navy working capital funds in the amount of $2,252,626 will be obligated at the time of award, and will not expire before the end of the current fiscal year.  The contract was not competitively procured in accordance FAR 6.302-1.  The NAVSUP Weapons System Support, Philadelphia, Pa., is the contracting activity (N00383-14-D-002P).

AIR FORCE
Diversitech Inc., Cincinnati, Ohio, has been awarded a $7,499,501 modification (P00011) for an existing indefinite-delivery/indefinite-quantity contract (FA8601-11-D-0001) for civil engineering facility and equipment support (FA8601-11-D-0001) extending the ordering period for one year.  This requirement provides routine maintenance and repair work for 7,352 pieces of equipment that support the mission of the Air Force Institute of Technology, Air Force Research Laboratory, National Air and Space Intelligence Center, and others.  Work will be performed at Wright-Patterson Air Force Base, Ohio, and is expected to be completed by Dec. 31, 2014.  Fiscal 2014 operations and maintenance and eesearch and development funds will be obligated on individual task orders.  Air Force Life Cycle Management Center/PZIO, Wright-Patterson Air Force Base, Ohio, is the contracting activity.

ARMY
Luhr Bros., Inc., Columbia, Ill., was awarded a $7,000,000 contract modification (P00001) to exercise option year one on contract W912QR-13-D-0032 for the leasing of a dredge, plant attendant, and on-shore disposal equipment for channel maintenance dredging on the Ohio River and Ohio River pooled tributaries and the upper Mississippi River 0.0-185.00.  Funding and the work performance site will be determined with each order.  Estimated completion date is Dec. 31, 2014.  Army Corps of Engineers, Louisville, Ky., is the contracting activity.

Source: DTN News - - This article compiled by K. V. Seth
(NSI News Source Info) TORONTO, Canada - December 9, 2013: Desperate to defuse Thailand's deepening political crisis, Prime Minister Yingluck Shinawatra said Monday she is dissolving the lower house of parliament and called for early elections. But the moves did nothing to stem a growing tide of more than 150,000 protesters vowing to overthrow her in one of the nation's largest demonstrations in years. 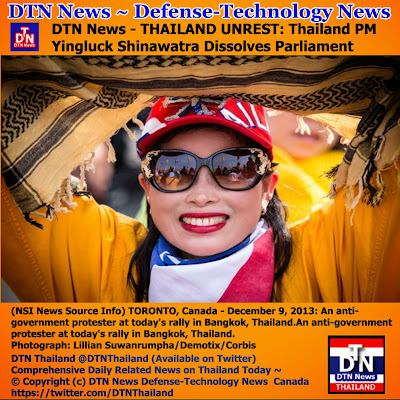 Analysts said the steps come too late and are unlikely to satisfy opponents who want to rid Thailand of her powerful family's influence. The protesters are pushing for a non-elected "people's council" to replace her democratically elected government.

In a speech late Monday, protest leader Suthep Thaugsuban lashed out against Yingluck, calling her administration "corrupt" and "illegitimate" as crowds of supporters cheered.

The man behind Thailand's latest political upheavals
Thailand PM Yingluck Shinawatra pleads for end to protests
The protest movement does "not consent to allowing the dictatorial majority … to betray the people, to destroy the balance of democratic power," Suthep said. The people must use "their rights as citizens to take back their power," he said.

Thailand has been plagued by major bouts of upheaval since Yingluck's brother, Thaksin Shinawatra, was toppled in a 2006 army coup that laid bare a deeper conflict between the elite and educated middle class against Thaksin's power base in the countryside, which benefited from populist policies designed to win over the rural poor.

An attempt by Yingluck's party last month to pass a bill through parliament that would have granted amnesty to Thaksin and others triggered the latest round of unrest. Thaksin fled overseas in 2008 to avoid a corruption conviction he says was politically motivated.

"After listening to opinions from all sides, I have decided to request a royal decree to dissolve parliament," said Yingluck, her voice shaking as she spoke in a nationally televised address that broke into regular programming. "There will be new elections according to the democratic system."

Yingluck's ruling party won the last vote two years ago in a landslide, and is likely to be victorious in any new ballot.

Government spokesman Teerat Ratanasevi said the cabinet had proposed a new vote be held Feb. 2. The date must be approved by the Election Commission, and electoral officials will meet with the government in the next few days to discuss it, said Jinthong Intarasri, a spokeswoman for the commission.

Yingluck said she will remain in a caretaker capacity until a new prime minister is named.

Many feared the day could end violently and more than 60 Thai and international schools closed as a precaution. But the marches were peaceful and no violence was reported.

Suthep has repeatedly said that calling new elections and even Yingluck's resignation would not be enough to end the conflict.

"We will keep on protesting because we want her family to leave this country," said Boonlue Mansiri, one of tens of thousands who joined a 20-kilometre march to Yingluck's office.

The sentiment was the same across town, where protesters filled a major four-lane road in the city's central business district, waving flags, blowing whistles and holding a huge banner that said, "Get Out Shinawatra."

Asked about the dissolution of Parliament, one middle-aged woman in the crowd said, "It is too late" and "It's not enough."

"At the end of the day, we are going to win," said the woman, who identified herself as Paew. "What happens now? Don't worry. We will figure it out."

Suthep's supporters on Monday appeared to abandon the two places they had occupied for more than a week — the Finance Ministry and part of a vast government complex.

The country's political standoff deepened Sunday after the main opposition party resigned from the legislature en masse to join the anti-government demonstrations. The minority Democrat Party held 153 of the 500 seats in the legislative body, according to the latest figures on their website.

The Democrats — who are closely allied with the protesters — have not won an election since 1992, and some of their leaders appear to have given up on electoral politics as a result.

Abhisit Vejjajiva, the leader of the Democrats and a former prime minister, led one of the marches through Bangkok on Monday. He declined to comment on whether the party would participate in the next election.

Since the latest unrest began last month, at least five people have been killed and at least 289 injured. Violence ended suddenly last week as both sides paused to celebrate the birthday of the nation's revered king, who turned 86 Thursday. 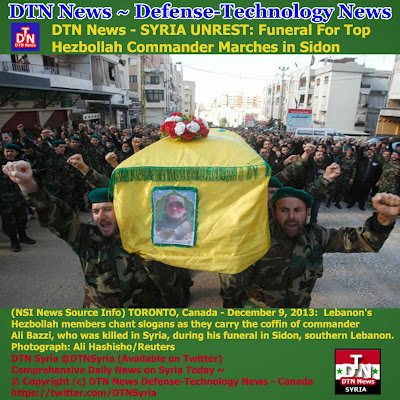 (NSI News Source Info) TORONTO, Canada - December 9, 2013: (Sidon, Lebanon) Hezbollah held a funeral procession in the suburb of the coastal city of Sidon Monday for a top military commander who was killed in Syria a day earlier.

The procession was led by Hezbollah MP Ali Fayyad, the Imam of Haret Sayda Sheikh Abdel-Hussein Abdallah and a Hezbollah Commander, Ali Daoun.

Ali Bazzi's coffin was carried on the shoulders of Hezbollah members as the commander's friends fired shots in the air.

The large procession prompted the Lebanese Army to deploy at the northern entrance of the city and in several neighborhoods leading to Haret Sayda.

Sidon is the home of fugitive Salafi-labelled Sheikh Ahmad Assir who was a staunch critic of Hezbollah and its involvement in the Syrian crisis. Assir and his supporters were engaged in deadly armed clashes against the Army in June.

Bazzi is originally from the southern town of Bint Jbeil but his family moved to Sidon decades ago. His father owns a shoe shop in the area.

A Lebanese security source told The Daily Star Sunday that Bazzi was killed in a combat zone.

The Syrian Observatory for Human Rights reported that Hezbollah fighters were killed during battles in Nabk, one of the last rebel-held areas in the Qalamoun region bordering Lebanon.

Hezbollah-backed regime forces have launched a military campaign to root out rebel forces in Qalamoun, near the border with Lebanon.