The Lokpal bill envisages setting up an independent ombudsman, who would have the power to investigate and prosecute politicians and civil servants.
Political parties have failed to reach a consensus on the bill.
Mr Hazare has threatened to go on hunger strike if it is not passed this session.
His 12-day anti-corruption fast in August became the focus of a national campaign and put pressure on the government to act on the issue.
Mr Hazare said he hoped MPs would reach a consensus on the bill in parliament.
"If there is no time for passing the bill, then extend [the parliament session]". It is important for the country. Earlier also, you have occasions when the session was extended," he said.
Media reports suggest that a special session of parliament could be convened to allow more time to bring about agreement on the Lokpal bill. The winter session is scheduled to end on 22 December. 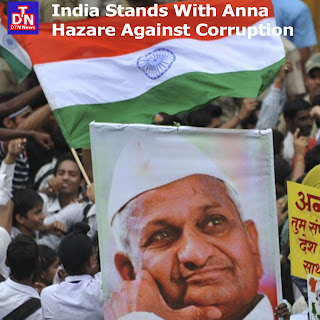 Leaders of 35 parties had joined Prime Minister Manmohan Singh at his residence in Delhi to discuss the Lokpal bill on Wednesday evening.
"Give us some reasonable time to consider views expressed [at the meeting]. I am not saying it is not possible to pass it in this session itself but it might also spill over," Finance Minister Pranab Mukherjee was quoted as saying by The Indian Express newspaper.
Among India's recent corruption scandals are an alleged multi-billion dollar telecoms scam, claims of financial malpractice in connection with the Delhi 2010 Commonwealth Games and allegations that houses intended for war widows ended up in the hands of civil servants.

DTN News presents a special feature on CORPORATE CORRUPTION by N. S. Hoon - Justice Magazine, which is self explanatory. Should the viewers and readers has any queries, please contact N. S. Hoon as per his coordinates available and prescribe.


‘Justice’                              I
Charitable Federation of diehard crusaders committed to fight corruption. & injustice
(Inspired & established in the cherished memory of Netaji Subhas Bose)
Chairman  & Editor ‘Justice’ Magazine: Mr. N.S. Hoon
10, N R I Complex,  G.K – IV, NEW DELHI-19. (Mob) 9268537814 /9136883434
email-  nshoon87yrs@gmail.com, http://nshoon-crusader-88.blogspot.com, http://nshoon80.blogspot.com
Respected Nishad Saheb,                                                        Date:- 16th December, 2011
I was greatly elated to receive copy of your letter dated 15-12-2011, addressed to Hon’ble Prime Minister, in which you have taken up the cause of Corporate corruption, including that of Ambanis/ R.I.L, who have flourished to dizzy heights with the active assistance of C.B.I. as well as Rogue Judges. In fact, CBI is an organization who have singularly contributed to the cause of corruption like no other Department in Govt.
This audacity of CBI stems from the fact that being a ‘Dirty-trick’ Department of the Government, they help to carry out the evil designs of Govt., to punish, harass and torment Govt. adversaries. As such, CBI has created an awe in the public psyche and they fully abuse their power to keep Govt. adversaries in control. As such, have become an indispensable instrument in the hands of the Ruling Party.
In fact, after receiving your letter, I have circulated the same to all important M.Ps, Jurists, and more particularly, all the Judges to cut down corruption which is still wide-spread. I know that it is impossible to eradicate corruption altogether, but it can certainly be reduced sizably and brought down to a tolerable level. This is possible only when an important person like Nishad, takes up this cause at the highest level including Parliament.
Regarding the future CJI Kabir, I heartily congratulate you for taking up this important cause by way of Impeachment. This is because Kabir’s appointment as CJI could be a national disaster, because he is not only himself corrupt to the core, but is capable of committing any crime to help the ruling party, which other Judges would refuse to touch. This is because he has been elevated to the Supreme Court by a gang of most corrupt Judges, including Ex-CJIs like K G Balakrishnan, Sabharwal, G B Patnaik and G N Ray, to name a few. I have got fool proof evidence on this subject, because I also want your help to punish the Ex- rogue CJIs, so that it will act as a deterrent for the future generation of Judges.
Regarding Kabir J.’s impeachment, I would like that the Parliament should summon the former Supreme Court Judge, Hon’ble Justice S B Sinha, who has been humiliated  & deliberately misinterpreted by Kabir J. This pre-meditated crime was done, only to save the above mentioned CJIs from a positive disaster of criminal prosecution and jail. This is because all of them were caught red-handed including a multi-crore bribe, which was taken two days before the retirement of CJI Patnaik, with the help of K G Balakrishnan and G N Ray.
Nishad Ji, although there are several like-minded Parliamentarians who have done their bit from time to time, but nobody has taken up the cause so boldly & seriously as has been done by you, for which I am most grateful.
Let me again assure you that our Crusade against Judicial corruption has already shown results and there is a steady reduction in judicial corruption through out India, Including Delhi.
Yours sincerely,