DTN News - YEMEN UNREST: Yemen's Saleh Says Ready To Step Down In 90 Days
*Authoritarian rulers days are numbered: What would be the fate of Yemeni Ali Abdullah Saleh - Be of Mubarak's Egypt or Gaddafi's Libya - DTN News

Source: DTN News - - This article compiled by Roger Smith from reliable sources Reuters
(NSI News Source Info) TORONTO, Canada / SANAA, Yemen - November 14, 2011: Yemeni President Ali Abdullah Saleh said on Monday he was ready to step down within 90 days of reaching a deal on a formal process for implementing a Gulf initiative aimed at ending the nine-month-old crisis in his country. 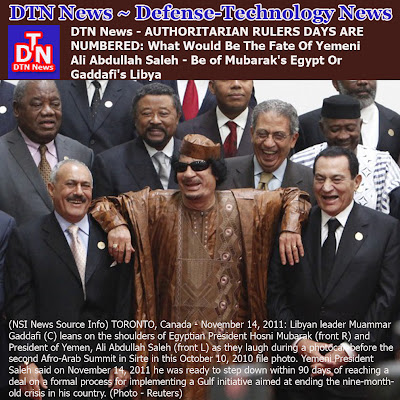 Saleh, who has so far refused to sign the accord proposed by the six-member Gulf Cooperation Council in April, told France's Channel 24 television in an interview that he had given his deputy, Abd-Rabbu Mansour Hadi, authority to negotiate a deal with the opposition.
Asked when he would leave office, Saleh said: "When an agreement on the Gulf initiative is reached, and when it is signed, and (it is agreed) on the operational mechanism and when elections are held, the president will leave."
Asked if there was a time frame for his departure, he said: "It is defined. It is within 90 days (of an agreement)."
"I have 33 years of experience in power and I know the difficulties, I know the negatives and positives. The one who clings to power is mad," he said.
An opposition official said on Sunday that Saleh was trying to thwart a mission by U.N. envoy Jamal Benomar to implement the U.N.-backed Gulf initiative, by insisting on staying in office until new elections are held.
"Saleh wants to preserve all his powers until the election of a new president and that is rejected by the opposition and because of this the U.N. envoy's mission is going to fail," said the official, who declined to be identified.
Benomar urged all Yemeni factions on Monday to reach an agreement "to save the Yemeni people from the sufferings of the current crisis," the Yemeni Defense Ministry's website said.
"I am in nearly daily contact with all political sides in Yemen and efforts are continuing to reach a peaceful end to the crisis," he added.
Under an "operational mechanism" proposed by Benomar, Saleh would step down immediately, triggering the formation of a national unity government ahead of early presidential elections. A body would be set up to restructure the armed forces.
Saleh said he had no objection to restructuring the armed forces, which split after the protests against his rule began in February. "Restructuring the army, I have no problem with that. The army belongs to the homeland and is not a personal property," he said.
Saleh also slammed the Arab Spring protests, calling the demonstrations "Arab anarchy."
He said support for these protests had come from a "small and weightless state" -- an apparent reference to Qatar, a wealthy Gulf Arab state and home to the Al Jazeera satellite TV channel, which gave sympathetic coverage to the Arab Spring uprisings, particularly those in Libya and Syria.
(Reporting by Sami Aboudi in Dubai and Mohammed Ghobari in Sanaa; editing by Tim Pearce)
Related News;
*Link for This article compiled by Roger Smith from reliable sources Reuters
*Speaking Image - Creation of DTN News ~ Defense Technology News
*This article is being posted from Toronto, Canada By DTN News ~ Defense-Technology News
Contact:
dtnnews@ymail.com

Lockheed Martin Gyrocam Systems, L.L.C., Sarasota, Fla. (M67854-12-D-5504), and FLIR Systems, Inc., North Billerica, Mass. (M67854-12-D-5503), are each being awarded a commercial, firm-fixed-priced, indefinite-delivery/indefinite-quantity, multiple award contract for up to a maximum quantity of 951 Vehicle Optic Sensor Systems (VOSS), including spare parts, maintenance/sustainment, training, and provisional technical data in Afghanistan and the continental United States. The maximum dollar value for both contracts combined, including the base year and four option years, is $513,697,547. FLIR Systems is being awarded delivery order 0001 at $1,985,226. Lockheed Martin Gyrocam Systems is being awarded delivery order 0001 at $251,500. The delivery order is for one VOSS unit and co-site integration. Work for these delivery orders is expected to be completed within 30 days from award. Work will be performed in Sarasota, Fla., and Billerica, Mass., and is expected to be completed November 2015. Contract funds will not expire at the end of the current fiscal year. This contract was competitively procured via the Navy Electronic Commerce Online website, with three proposals received. These two contractors will compete for delivery orders under the terms and conditions of the awarded contract. Marine Corps Systems Command, Quantico, Va., is the contracting activity.

General Dynamics, Electric Boat Corp., Groton, Conn., is being awarded a $41,616,738 cost-plus-fixed-fee contract for New England Maintenance Manpower Initiative requirements. Under the terms of the contract, Electric Boat will provide services required to support planned and emergent non-nuclear maintenance and repair of operational nuclear submarines, floating dry-docks, support and service craft, and other platforms and equipment at the Naval Submarine Support Facility, New London, Conn. Electric Boat is the only source capable of performing this work. Work will be performed in New London, Conn., and is expected to be completed by November 2012. Contract funds in the amount of $1,500,000 will be provided at time of contract award and will expire at the end of the current fiscal year. The contract was not competitively procured. The Naval Sea Systems Command, Washington Navy Yard, Washington, D.C., is the contracting activity (N00024-12-C-4312).

General Dynamics Electric Boat Corp., Groton, Conn., is being awarded a $15,140,535 modification to previously awarded contract (N00024-11-C-2109) to exercise an option for engineering and technical design services to support research and development of advanced submarine technologies for current and future submarine platforms. Advanced submarine research and development includes studies to support the manufacturability, maintainability, producibility, reliability, manning, survivability, hull integrity, performance, structural, weight/margin, stability, arrangements, machinery systems, acoustics, hydrodynamics, ship control, logistics, human factors, materials, weapons handling and stowage, submarine safety, and affordability. The program also supports near term insertion of Virginia-class technology; identification of Ohio-class replacement technology options; future submarine concepts; and core technologies. Funds in the amount of $656,000 will be obligated at time of award. Work will be performed in Groton, Conn., and is expected to be completed by October 2012. Contract funds will not expire at the end of the fiscal year. The Naval Sea Systems Command, Washington, D.C., is the contracting activity. 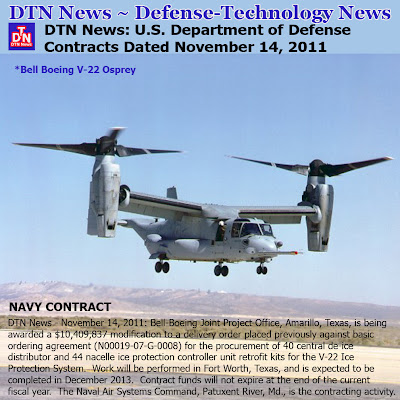 Bell-Boeing Joint Project Office, Amarillo, Texas, is being awarded a $10,409,837 modification to a delivery order placed previously against basic ordering agreement (N00019-07-G-0008) for the procurement of 40 central de-ice distributor and 44 nacelle ice protection controller unit retrofit kits for the V-22 Ice Protection System. Work will be performed in Fort Worth, Texas, and is expected to be completed in December 2013. Contract funds will not expire at the end of the current fiscal year. The Naval Air Systems Command, Patuxent River, Md., is the contracting activity.

Northrop Grumman Systems Corp., Herndon, Va., was awarded a $279,364,696 cost-plus-incentive-fee contract. The award will provide for the mortar requirement for the installation and support for critical components of the System of Systems in support of ongoing contingency operations. Work will be performed in Bagram, Afghanistan and Huntsville, Ala. The estimated completion date is Nov. 3, 2014. One bid was solicited, with one bid received. The U.S. Army Contracting Command, Redstone Arsenal, Ala., is the contracting activity (W31P4Q-12-C-0029).

American Apparel, Inc., Selma, Ala., was issued a modification exercising the fourth option year on contract SPM1C1-07-D-1551/P00030. The award is a firm-fixed-price, indefinite-quantity contract with a maximum $6,937,424 for Navy task force working/utility uniforms and Army combat uniforms. Other locations of performance are throughout Alabama and Mississippi. Using services are Army and Navy. The competition was Web-solicited with 10 responses. Type of appropriation is fiscal 2012/2013 Defense Working Capital Funds. The date of performance completion is Nov. 18, 2012. The Defense Logistics Agency Troop Support, Philadelphia, Pa., is the contracting activity. 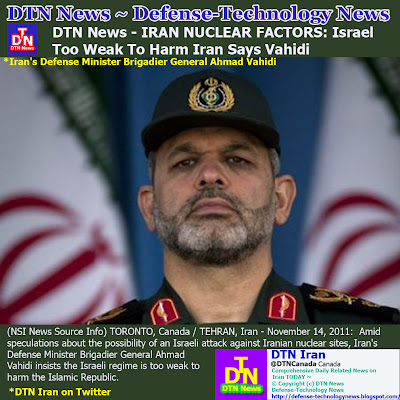 Any attempt by the “Zionist regime” to enter into a conflict with a power such as Iran will be suicidal, said Vahidi, speaking Sunday to reporters at the sideline of a ceremony, unveiling three types of sport and hunting weapons.
“Anytime the Zionist regime desires to commit suicide, it should then adopt such a decision,” the top general said, quoted in an IRIB report.
As Iran has repeatedly emphasized, the Islamic Republic will firmly respond to any foreign threat in a manner that would make the enemy think twice before engaging in any sort of aggression against the nation, the minister emphasized.
Vahidi reiterated that an attack against Iran by the Israeli regime will spell into an end to its existence.
Washington and the Tel Aviv regime have repeatedly threatened Tehran with military strikes on the false pretext that Iran's nuclear program may have a covert military diversion.
Israeli President Shimon Peres claimed on November 6 that an attack against the Islamic Republic was getting "more and more likely,” a claimed fiercely rejected by many international observers and officials.
Tehran has categorically refuted rhetorical allegations by US-led Western powers, saying that as a signatory to the Nuclear Non-Proliferation Treaty, it has the right to develop and acquire nuclear technology for peaceful purposes.
Iranian officials have vowed to deliver a crushing response to any military strike against the country, warning that any such measure could result in a war that would certainly reach far beyond the Middle East.
With over 50 types of state-of-the-art missiles at its disposal, Iran is readily capable of delivering a death blow to any aggressor who ventures to violate its soil. However, Iran has frequently said its military might poses no threat to other countries and that its defense doctrine is based on deterrence.
Latest From Iran
*Speaking Image - Creation of DTN News ~ Defense Technology News
*This article is being posted from Toronto, Canada By DTN News ~ Defense-Technology News
Contact:
dtnnews@ymail.com