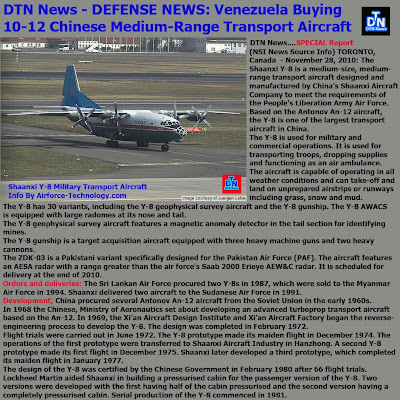 “These Y-8s will provide support for the operations of our C-130 Hercules transport planes...that have a range covering South America and to the north of Spain,” Maj. Gen. Jorge Oropeza said Friday.
He said that negotiations for the purchase of the Y-8s are in the hands of the Defense Ministry and it is hoped that these aircraft will be delivered to Venezuela sometime next year. The Y-8 is a medium-size, mid-range transport aircraft with a capacity for carrying 88 passengers and 20 tons of cargo during 7.3 hours of autonomous, uninterrupted flight, Oropeza told the state-run ABN news agency.
Oropeza said that the 18 K-8s “will be on view tomorrow at the main ceremony of the 90th anniversary of the (Venezuelan military aviation),” along with the JL11 radars that were also purchased from the Asian giant earlier in 2010. The defense minister, Gen. Carlos Mata, also told ABN that since President Hugo Chavez came to power in February 1999, Venezuelan military aviation “has made technological progress in terms of the defense of air space, being equipped with new aircraft and the modernization of this branch of the military.” “Notable among the achievements of this military branch is its technological development and the acquisition of new aircraft and equipment,” he said. About the cost of recent military purchases, the socialist head of state said at midyear that he had approved the spending of $82 million “to make a partial payment” for the 18 K-8 aircraft. “This is an aircraft for basic training able to employ armament including light bombs, rockets and machine guns, while fulfilling all the requirements for training pilots,” air force commander Gen. Luis Berroteran said in October 2008. The Venezuelan government recently purchased from Russia 24 Sukoi fighters, 50 MI helicopters and 100,000 AK-103 rifles, for some $3 billion, according to Russian sources.
*This article is being posted from Toronto, Canada By DTN News ~ Defense-Technology News, contact: dtnnews@ymail.com
© Copyright (c) DTN News Defense-Technology News

"Iran has constantly said that it would be beside the Lebanese army and resistance [Hezbollah] and ready to cover the country's defense needs," Iran's Defense Minister Ahmad Vahidi said at a military fair in Tehran also attended by visiting Lebanese Prime Minister Saad Hariri, according to ISNA.

Hariri welcomed the Iranian offer and called for a closer cooperation between the two countries' defence ministries, ISNA said. Hariri arrived in Tehran on Saturday and is scheduled to meet with Iranian President Mahmoud Ahmadinejad later Sunday.

As a symbol of Iran's solidarity with Lebanon, Vahidi presented Hariri an Iran-made machine-gun.

In a meeting earlier Sunday with Vice-President Mohammad Reza Rahimi, the two sides urged a deepening of relations in all fields.

But Hariri's visit has been overshadowed by Iran's support for Hezbollah, which leads the opposition against his Western-backed government.

The rift between the two factions has widened after reports that the United Nations-backed tribunal investigating the 2005 assassination of Hariri's father, former premier Rafik Hariri, was ready to indict Hezbollah members for the murder. 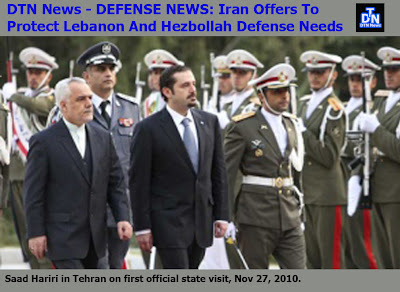 Iranian media quoted Hariri as saying Sunday that he was the leader of the "unity government" and hence represented all political parties and groups in Lebanon.