Source: DTN News - - This article compiled by K. V. Seth from reliable sources CBC News
(NSI News Source Info) TORONTO, Canada - March 11, 2014: The Malaysian military has radar data showing the missing Boeing 777 jetliner changed course and made it to the Malacca Strait, hundreds of kilometres from the last position recorded by civilian authorities, according to a senior military official. 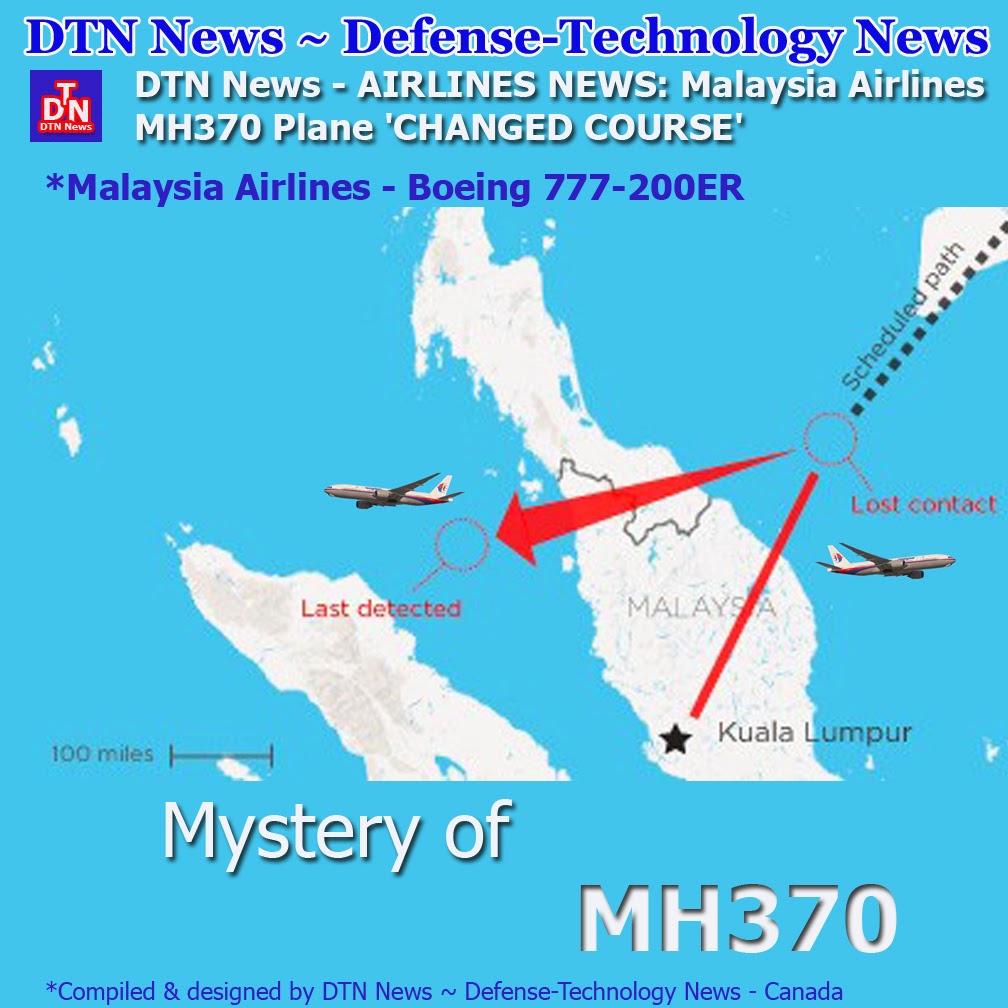 The development injects more mystery into the investigation of the disappearance of Saturday's flight, and raises questions about why the aircraft was not transmitting signals detectable by civilian radar.

Local newspaper Berita Harian quoted Malaysian air force chief Gen. Rodzali Daud as saying radar at a military base had detected the airliner at 2:40 a.m. local time near Pulau Perak at the northern approach to the strait, a busy waterway that separates the western coast of Malaysia and Indonesia's Sumatra island.

A high-ranking military official involved in the investigation confirmed the report and also said the plane was believed to be flying low. The official spoke on condition of anonymity because of the sensitivity of the information.

Authorities had earlier said the plane, which took off at 12:20 a.m. and was headed to Beijing, may have attempted to turn back to Kuala Lumpur, but they expressed surprise that it would do so without informing ground control.

The search for the plane was initially focused on waters between the eastern coast of Malaysia and Vietnam, the position where aviation authorities last tracked it. No trace of the plane, which was carrying 239 people, has been found by the 40 planes and ships from at least 10 nations searching the area.

Earlier Tuesday, Malaysia Airlines said in a statement that search and rescue teams had expanded their scope to the Malacca Strait. An earlier statement said the western coast of Malaysia was "now the focus," but the airline subsequently said that phrase was an oversight. It didn't elaborate. Civil aviation chief Azharuddin Abdul Rahman said the search remained "on both sides" of the country.

Also Tuesday, authorities said two people who boarded the flight using stolen passports were Iranians who had purchased tickets to Europe. Their appearance on the flight had raised speculation of a possible terrorist link.

Malaysian police chief Khalid Abu Bakar said investigators had determined one was a 19-year-old Iranian, Pouria Nourmohammadi Mehrdad, and that it seemed likely he was planning to migrate to Germany.

"We believe he is not likely to be a member of any terrorist group," Khalid said.

Interpol identified the second man as Seyed Mohammed Reza Delavar, a 29-year-old Iranian, and released an image of the two boarding a plane at the same time. Interpol Secretary General Ronald K. Noble said the two men travelled to Malaysia on their Iranian passports, then apparently switched to their stolen Austrian and Italian documents.

He said speculation of terrorism appeared to be dying down "as the belief becomes more certain that these two individuals were probably not terrorists." He appealed to the public for more information about the two.

Malaysia Airlines, meanwhile, said it is investigating an Australian television report that the co-pilot on the missing plane had invited two women into the cockpit during a flight two years ago. 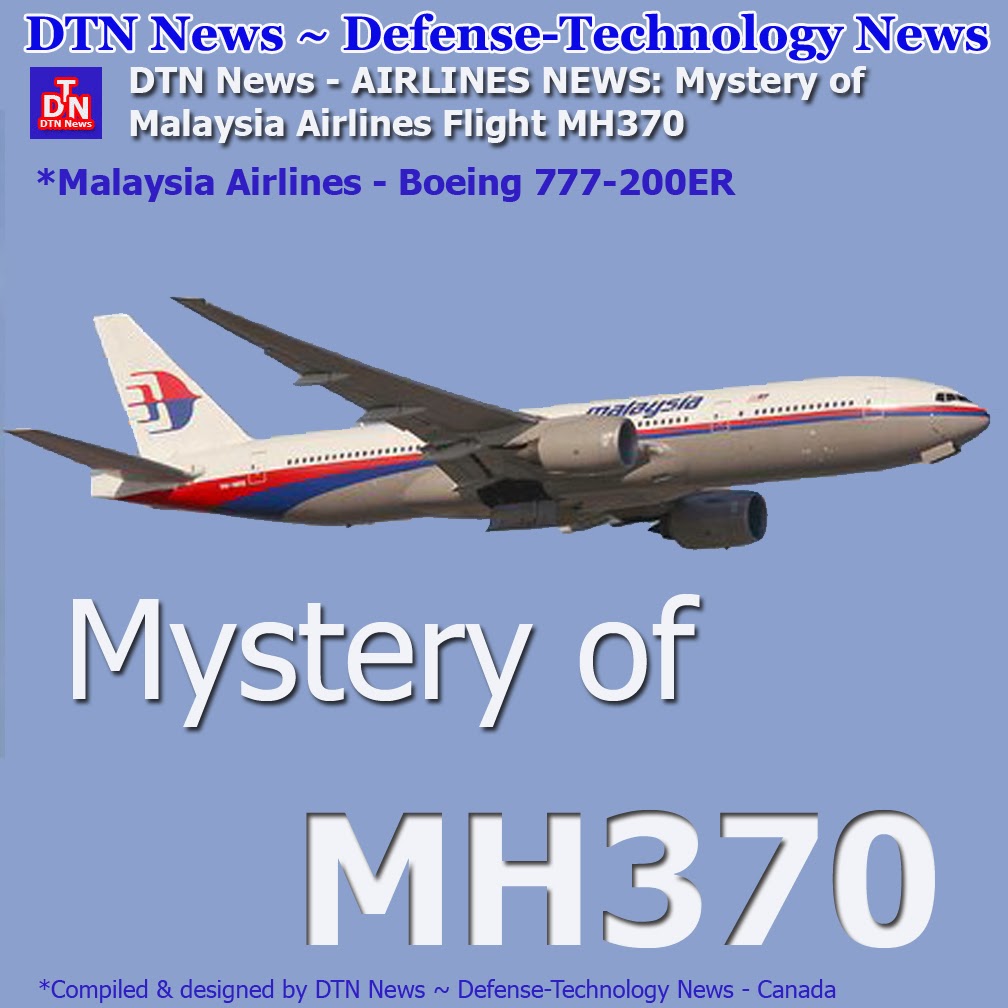 Jonti Roos described the encounter on Australia's A Current Affair. The airline said it wouldn't comment until its investigation is complete.

Roos said she and her friend were allowed to stay in the cockpit during the entire one-hour flight on Dec. 14, 2011, from Phuket, Thailand, to Kuala Lumpur. She said the arrangement did not seem unusual to the plane's crew.

Roos didn't immediately reply to a message sent to her via Facebook.

The missing plane took off from Kuala Lumpur, on the western coast of Malaysia, early Saturday en route to Beijing.

It flew across Malaysia into the Gulf of Thailand at 11,000 metres and then disappeared from radar screens.

The hunt began on Saturday near the plane's last known location. But with no debris found there, the search has been systematically expanded to include areas the plane could have reached with the fuel it had on board. That is a vast area in which to locate something as small as a piece of an aircraft.

China, where two-thirds of the passengers are from, urged Malaysian authorities on Tuesday to "speed up the efforts" to find the plane. It has sent four ships, with another four on the way.

A shopping mall in Beijing suspended advertising on its large outdoor LED screen to display a search timer — an image of an airplane along with a digital clock marking the time since contact with the flight was lost.

Assuming the plane crashed into the ocean or disintegrated in midair, there will likely still be debris floating in the ocean, but it may be widely spread out and much may have already sunk. In past disasters, it has taken days or longer to find wreckage.

Source: DTN News - - This article compiled by K. V. Seth from reliable sources RT
(NSI News Source Info) TORONTO, Canada - March 11, 2014: The US is sending a dozen F-16 fighter jets and nearly 300 service personnel to Poland by Thursday as part of a training exercise in response to the crisis in neighboring Ukraine, the Polish defense ministry confirmed. 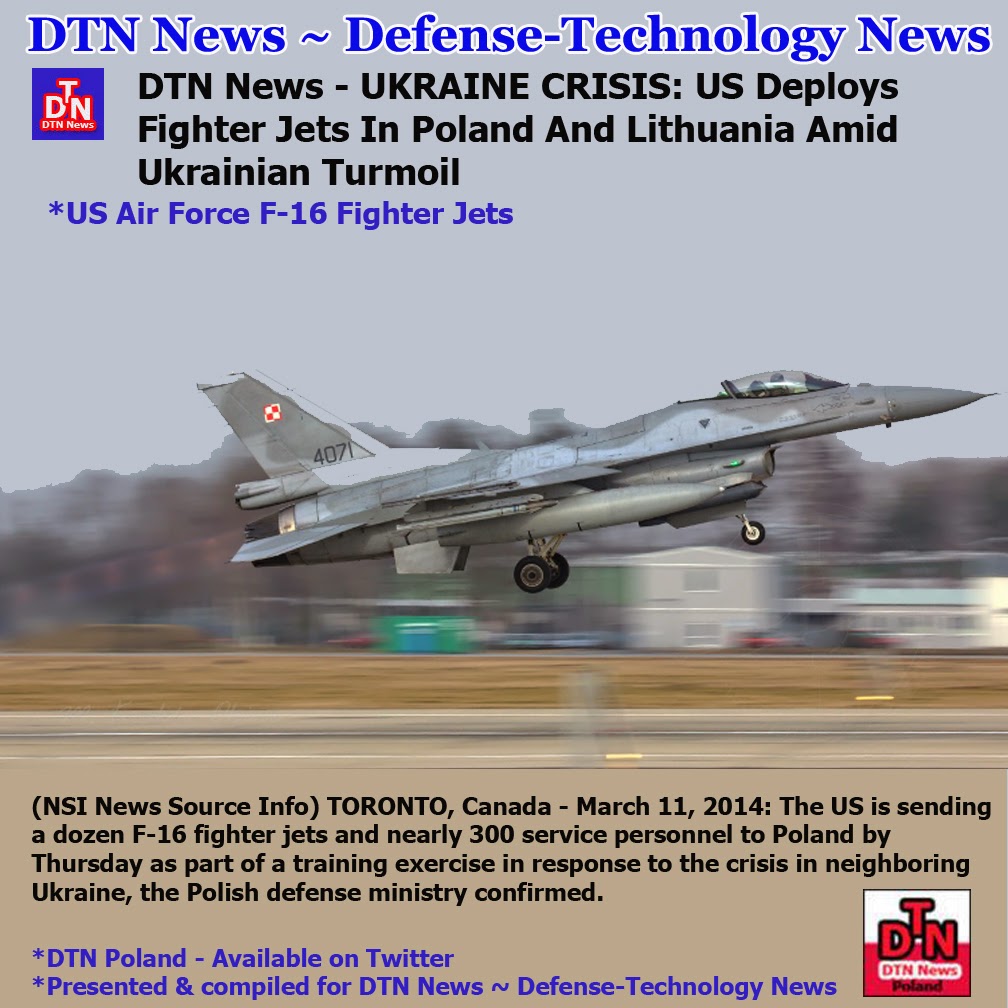 The agreement to deploy US military forces in Poland was made between US Defense Secretary Chuck Hagel, and Poland’s Minister of National Defense Tomasz Siemoniak during a telephone conversation on Sunday, March 9, 2014, according to a statement on the official website of the Polish Ministry of National Defense.

Initially, the training exercise was planned to be smaller but was increased and pushed forward because of the “tense political situation” in neighboring Ukraine, added Sonta.

The ministry also said that the aim of sending the units is to “strengthen Polish - American cooperation.” Part of the preparation team of US Air Force has already arrived on Polish territory.

The fighters were sent on the initiative of the Polish government, an initiative immediately accepted by Washington.

On Monday, NATO also gave the go-ahead to Airborne Warning and Control System (AWACS) for reconnaissance flights over Poland and Romania in order help monitor the crisis in Ukraine. 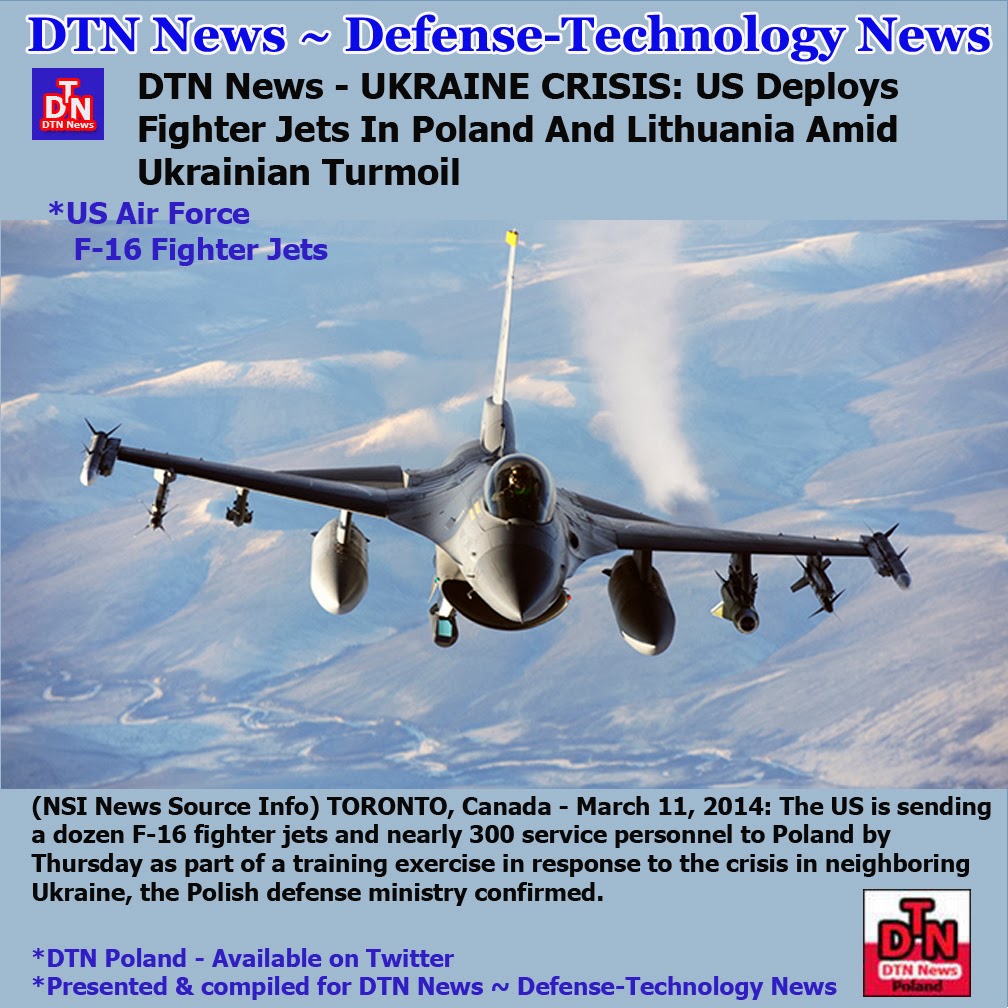 Poland is a western neighbor of crisis-torn Ukraine - between the countries’ capitals, Warsaw and Kiev, there is less than 700 km.

Earlier, the Polish media reported that US fighter jets would be stationed at the Lask air force base in central Poland.

Washington is also sending four F-15 planes to Lithuania in response to “Russian aggression in Ukraine and increased military activity in Kaliningrad,” according to the Lithuanian Defense Ministry.

On Saturday, US Navy destroyer, the USS Truxtun, crossed Turkey's Bosphorus and entered the Black Sea. The ship, with around 300 crew, was heading to “previously planned” training exercises with the Bulgarian and Romanian navies. When the vessel appeared in the Black Sea, Fox News declared that NATO’s bolstering presence in the Black Sea is a “defensive” measure to counter “Russian military aggression” in Ukraine.

USS Truxton, one of the largest destroyers ever built for the US navy, will reportedly stay in the Black Sea till mid-March as the Montreux Convention allows a warship of any non-Black Sea country to stay in the region for 21 day only.

The situation in Ukraine is close to financial and humanitarian catastrophe after the armed coup which took place in February. There are mass protests in eastern and southern parts of the country against the self-proclaimed authorities in Kiev.

The Autonomous Republic of Crimea has scheduled a referendum for March 16 on whether it wants to remain part of Ukraine, or join Russia. 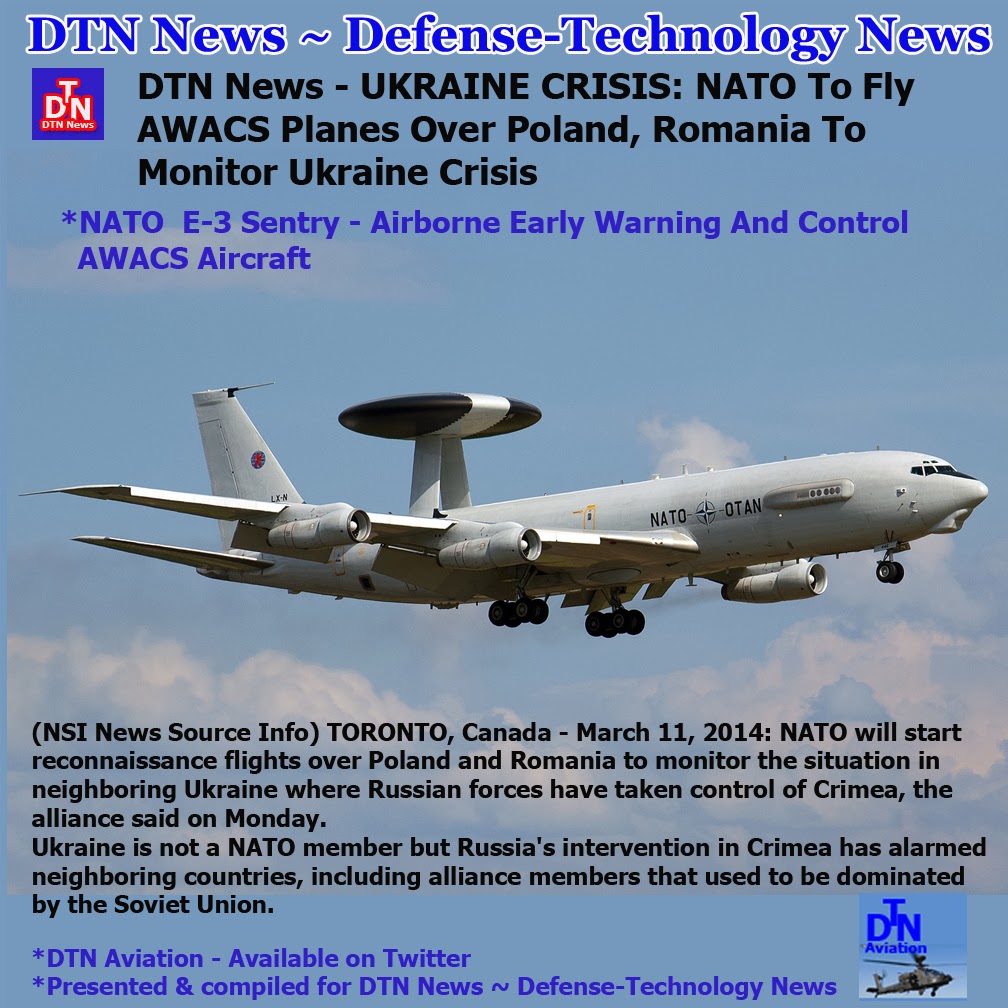 Ukraine is not a NATO member but Russia's intervention in Crimea has alarmed neighboring countries, including alliance members that used to be dominated by the Soviet Union.

AWACS (airborne early warning and control) planes will fly from their home airbases in Geilenkirchen, Germany, and Waddington in Britain, the spokesman said.

"These flights will enhance the alliance's situational awareness and all will take place solely over alliance territory," he said.

The flights will start soon and go on for as long as required, he added.

The Western military alliance announced a review of its cooperation with Moscow last week after Russian forces tightened their grip on Crimea, home to the Russian Black Sea Fleet, following weeks of upheaval in Ukraine which culminated in the ousting of President Viktor Yanukovich.

NATO allies met last Tuesday after Poland invoked a rule allowing any ally to consult with the others if it feels its security is under threat.

Soon after that meeting, U.S. officials said the Pentagon would more than double the number of U.S. fighter jets on a NATO air patrol mission in the Baltics and do more training with Poland's air force in an attempt to reassure allies.

The E-3 Sentry is an airborne warning and control system (AWACS) aircraft that provides all-weather surveillance, command, control and communications needed by commanders of U.S. and NATO air defense forces. As proven in Desert Storm, it is the premier air battle command and control aircraft in the world today.