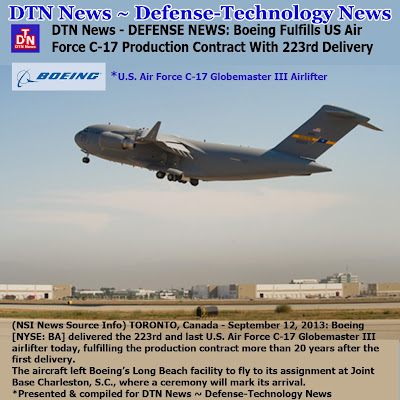 The aircraft left Boeing’s Long Beach facility to fly to its assignment at Joint Base Charleston, S.C., where a ceremony will mark its arrival.
The Air Force was the C-17's launch customer. Since the aircraft's first flight Sept. 15, 1991, it has been the world's only strategic airlifter with tactical capabilities that allow it to fly between continents, land on short, austere runways, and airdrop supplies precisely where they are needed.
"Thank you for delivering to our nation combat airlift – that is the definition of the C-17 – the most versatile, most capable, most ready airlifter ever built," said U.S. Air Force Gen. Paul Selva, commander, Air Mobility Command. "What you have done with this aircraft speaks volumes about your character."
Boeing continues to produce C-17s for other customers around the world, and maintain and sustain the aircraft through the C-17 Globemaster Integrated Sustainment Program.
C-17s have been involved in contingency operations of all types, including flying troops and equipment to Operation Enduring Freedom in Afghanistan and to Operation Iraqi Freedom. The airlifter also has been used in humanitarian missions around the world, including the Japanese and Indian Ocean tsunamis of 2011 and 2004, respectively; Hurricane Katrina in 2005; and the Haitian earthquake of 2010.
"C-17s are the workhorse for the U.S. Air Force in wartime and in peace," said Chris Chadwick, Boeing Military Aircraft president. "So while this is the last new C-17 to be added to the Air Force fleet, the mission does not stop here. The C-17 delivers hope and saves lives, and with the Air Force in the pilot's seat, it will continue to do so well into the future."
The C-17 holds 33 world records – more than any other airlifter in history – including payload-to-altitude, time-to-climb and short-takeoff-and-landing marks. It has exceeded 2.6 million flight hours, playing an integral role in global strategic airlift.
The National Aeronautics Association in 1994 awarded the C-17 its Collier Trophy, recognizing the aircraft as the top aeronautical achievement of that year.
"C-17 is the product of our dedicated workforce and more than 20 years of teamwork with our suppliers and the U.S. Air Force," said Nan Bouchard, Boeing vice president and C-17 program manager. "Every employee here is proud to build this amazing aircraft. We are continuing the legacy by building C-17s for our partner nations, and we will continue to work with the U.S. Air Force to ensure their aircraft deliver top performance into the future."
In addition to the 223 C-17s delivered to the U.S. Air Force, 34 are operated by Australia, Canada, India, Qatar, the United Arab Emirates, the United Kingdom and the 12-member Strategic Airlift Capability initiative of NATO and Partnership for Peace nations.
A unit of The Boeing Company, Boeing Defense, Space & Security is one of the world's largest defense, space and security businesses specializing in innovative and capabilities-driven customer solutions, and the world's largest and most versatile manufacturer of military aircraft. Headquartered in St. Louis, Boeing Defense, Space & Security is a $33 billion business with 59,000 employees worldwide. Follow us on Twitter: @BoeingDefense.