Navistar Defense, LLC, Warrenville, Ill., is being awarded $183,255,453 for firm-fixed-priced delivery order #0018 under previously awarded contract (M67854-07-D-5032) for the procurement 250 MaxxPro Dash ambulance vehicles. The objective of the ambulance vehicles to provide mobile and survivable ambulatory care for injured servicemen in theater. Work will be performed in West Point, Miss., and is expected to be completed by the end of September 2011. Contract funds in the amount of $183,255,453 willexpire at the end of the current fiscal year. The Marine Corps Systems Command, Quantico, Va., is the contracting activity.

Canadian Commercial Corp., General Dynamics Land Systems - Canada, London, Ontario, Canada, is being awarded a $21,845,444 firm-fixed-priced modification under previously awarded contract (M67854-07-D-5028) for the procurement of 325 rocket propelled grenade net kits and the associated non-recurring engineering. Work will be performed in Waltham, Mass. (98 percent), and London, Ontario, Canada (2 percent). Installation of the kits will be in Afghanistan in support of Operation Enduring Freedom. Work is expected to be completed no later than November 2011. Contract funds will not expire at the end of the current fiscal year. Marine Corps Systems Command, Quantico, Va., is the contracting activity.

General Dynamics Bath Iron Works, Bath, Maine, is being awarded an $18,800,000 cost-plus-fixed-fee modification to previously awarded contract (N00024-06-C-2303) for additional class services associated with the detail design and construction of the Zumwalt-class (DDG 1000) destroyer. This work will provide technical and industrial engineering in the interpretation and application of the detailed design to support construction and the maintenance of a safe and operable ship design. Work will be performed in Bath, Maine, and is expected to be completed by July 2011. Contract funds will not expire at the end of the current fiscal year. The Naval Sea Systems Command, Washington, D.C., is the contracting activity.

On May 2, 2011, Guident Technologies, Inc., Herndon, Va., was awarded an indefinite-delivery/indefinite-quantity contract with a not-to-exceed ceiling price of $27,016,520 for continuation of system life cycle support services for data management/enterprise data warehouse/business intelligence environments. The period of performance is for a one-year base period of May 1, 2011 through Sept. 30, 2011 and four one-year option periods. Performance will be at Defense Commissary Agency, Fort Lee, Va. The solicitation was issued as a full and open competitive action pursuant to 10 U.S.C. 2304, 41 U.S.C. 253, and FAR 6.101(b). Solicitation HC1028-10-R-2038 was posted on Aug. 30, 2010 at the Defense Information Technology Contracting Organization Contracting Opportunities website, and the Federal Business Opportunities website; four offers were received. Guident Technologies is a large business. The Defense Information Technology Contracting Organization, Scott Air Force Base, Ill., is the contracting activity (HC1028-11-D-0100). 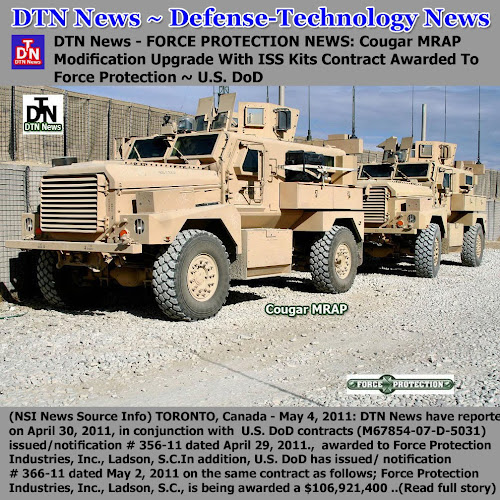 In addition, U.S. DoD has issued/ notification # 366-11 dated May 2, 2011 on the same contract as follows;
Force Protection Industries, Inc., Ladson, S.C., is being awarded a $106,921,400 firm-fixed-price modification under previously awarded contract (M67854-07-D-5031) for procurement of 650 Category I Vehicle Independent Suspension System (ISS) kits and 350 Category II Vehicle ISS kits, for the Cougar Mine Resistant Ambush Protected (MRAP) vehicle fleet supporting Operation Enduring Freedom.
Work will be performed in Oshkosh, Wis. (95 percent), and Ladson, SC. (5 percent), and is expected to be completed no later than Dec. 31, 2011. Fiscal 2009 Other Procurement Air Force funds in the amount of $1,407,765 will expire at the end of the current fiscal year.
These funds will expire at the end of the current fiscal year. Marine Corps Systems Command, Quantico, Va., is the contracting activity.
*Link for This article compiled by
By Roger Smith - DTN News ~ Defense-Technology News &
U.S. DoD
*Speaking Image - Creation of DTN News ~ Defense Technology News
*This article is being posted from Toronto, Canada By DTN News ~ Defense-Technology News
Contact:
dtnnews@ymail.com