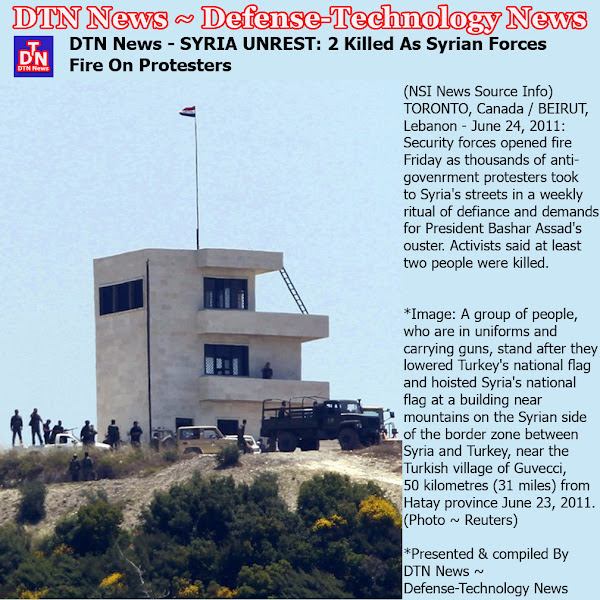 The fatalities occurred in al-Kasweh, a suburb of the capital, Damascus, and in the central city of Homs, said Omar Idilbi of the Local Coordination Committees, which track the Syrian protests. Protests in several other provinces also came under fire but it was not immediately clear whether there were casualties, Idilbi said.

"Our revolution is strong! Assad has lost legitimacy!" protesters chanted in the Damascus suburb of Zabadani, according to video posted on YouTube.

The military crackdown has failed to silence a pro-democracy movement that has now lasted more than 100 days.

In northern Syria, activists said at least 15,000 people held a protest on the highway linking the country's two main cities, Damascus and Aleppo. Thousands marched in Amouda and Qamishli in the northeast and in other provinces, Syria-based human rights activist Mustafa Osso said.

Dissidents reported a strong security presence in many locations. In Homs, all roads leading to the city center were reported blocked.

The suburban Damascus protesters also carried a banner that read, "Oh germs and rats of the world, unite," taking up terms used by Assad, who likened some of Syria's troubles to a "germ" to be fought off, and Libyan leader Moammar Ghadafi, who described his country's protesters as rats.

The video and other reports from inside Syria could not be independently verified, since the Damascus government has banned all but a few foreign journalists and restricted local media's reporting.

The Syrian opposition says 1,400 people have been killed in a relentless government crackdown on the more than three months of public dissent. The Syrian regime blames foreign conspirators and thugs for the unrest, but the protesters deny any foreign influence in their movement, during which they say authorities also have detained 10,000 people.

The protests, which have occurred every Friday after weekly Muslim prayers, come as Syrian refugees stream across the border to safe havens in Turkey to escape a military sweep in Syria's northwest. More than 1,500 Syrian refugees crossed into neighboring Turkey on Thursday alone, boosting the number sheltered in Turkey to more than 11,700.

International condemnation on Damascus was mounting steadily. The European Union announced Thursday it was slapping new sanctions on the Syrian regime and U.S. Secretary of State Hillary Rodham Clinton warned Damascus to pull its troops back from the Turkish border, where concerns grew of possible confrontations with Turkish troops.

Citing residents on the ground, Osso said the military has deployed heavily in areas across the border from Turkey and set up checkpoints. He said the few thousand people who had been on the Syrian side of the border had all fled into Turkey.

Anticipating an exodus from Syria's second city, Aleppo, Turkish officials were setting up a sixth camp with up to 800 tents near a border crossing.

On Thursday, Syrian soldiers patrolled in military vehicles and on foot around the border village of Khirbet al-Jouz, according to Associated Press journalists who watched their movements from the Turkish side. The Local Coordinating Committees said residents reported tanks had entered the village and snipers were spotted on rooftops Thursday.

The Syrian army's operation was the closest Syrian troops had come to Turkey since the military crackdown in the area began two weeks ago as President Assad's forces tried to snuff out the opposition's chances of gaining a territorial foothold for a wider rebellion. The army's main thrust came against the town of Jisr al-Shughour, where armed anti-government resistance flared in early June.

Turkish Foreign Minister Davutoglu told reporters Friday he had conveyed Turkey's "concerns and thoughts" about the operation near Turkey's border in a telephone conversation with his Syrian counterpart on Thursday.

He said he would continue to talk to Syrian officials to ensure that "reforms and peace are brought about as soon as possible."

"We hope that Syria is successful in renewing itself in a stable manner and comes out of the situation stronger. We will do all that we can to help," he said.

In Brussels, the EU said it had expanded its anti-Syrian sanctions list, targeting seven more individuals and four companies, bringing to 34 the number of people and entities faced with an asset freeze and travel ban, including Assad.

The EU also has an embargo on sales of arms and equipment that can be used to suppress demonstrations.

In the government's latest bid to blunt the demonstrations, Foreign Minister Walid Moallem on Wednesday reiterated Assad's call for national dialogue and spoke of democracy within months — a bold assertion after more than four decades of authoritarian rule by the Assad family and months of bloody reprisals.

A skeptical opposition rejected the overture while the Syrian military is occupying towns and shooting protesters.

*Link for This article compiled by Roger Smith from reliable sources
ELIZABETH A. KENNEDY, Associated Press