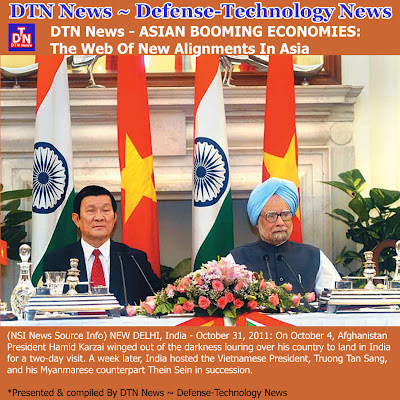 his country to land in India for a two-day visit. A week later, India hosted the Vietnamese President, Truong Tan Sang, and his Myanmarese counterpart Thein Sein in succession. In case you are wondering what prompted the heads of state of these three countries—not occupying much mindspace of ordinary Indians—to come calling on New Delhi, a rebalancing of regional power equations has escaped your notice. In a nutshell, key countries across Asia are currently engaged in the business of forging new alliances. Three crucial factors seem to have sparked off the diplomatic realignment. To begin with, Asia is home to some of the fastest growing economies of the world, and holds out hope of rejuvenating a global economy so palpably destitute of any vim. Yet, ironically, Asia is also the battleground where some of the bloodiest conflicts of the world are being fought. The third factor is the rise of China— economically galloping, occasionally flexing its muscles and generating consternation across the continent.

In this ongoing realignment, India has emerged as a player, a surety of sorts against the vagaries of the future. What has enabled India to carve a niche of its own is its impressive growth over the last 10 years, its inclusive democracy, its growing military might, and the faith the US has reposed in New Delhi’s ability to play a global role. As former ministry of external affairs secretary N. Ravi told Outlook, “It’s not only the familiarity and trust that all these countries have with India but also the fact that our development and growth provides a framework for many of them to use as a model.”

Hamid Karzai’s recent visit best illustrates the vantage position India occupies. With Pakistan-controlled terror groups killing top Afghan leaders and the atmosphere of acrimony enveloping US-Pak relations, a rattled Karzai signed a strategic partnership agreement with India. It was perceived as an attempt to register growing frustration with Islamabad’s reluctance to act against terror groups operating from Pakistani soil against the Karzai regime. It was Karzai’s way of telling Pakistan that it had better accede to his wishes or else run the risk of seeing India emerge as a major player in Afghanistan. To put it mildly, this is anathema to Pakistan, with its cult of ‘strategic depth’, which demands a friendly neighbour in the west so that it can focus on its eastern border with India.

Srinath Raghavan of the Centre for Policy Research provides another reason: “Unlike others, India worked on a stand-alone basis in Afghanistan by talking to the Afghans directly and not through the US or others. Through the agreement, Karzai has recognised India as a long-term and reliable partner.”

If Afghanistan and India have come closer, then so have China and Pakistan. What has prompted Islamabad to seek Beijing as never before is Washington’s refusal to accept Pakistan as the sole arbiter of Afghanistan’s future. Frustrated and angry, Pakistan has been talking tough with the US. Some in the Indian foreign policy establishment feel Pakistan’s bold stance has been at China’s behest. Others, however, feel this could be China’s method of merely testing America’s resolve. Their argument: it isn’t in Beijing’s interest to allow the Pak-US problems to fester beyond a point. It, therefore, might soon ask Pakistan to back off. Their reason? Instability and violence in Afghanistan could spill over into China and impact its growth. Nor would China want to substitute the Americans—and consequently commit its resources—in bolstering Pakistan’s creaking economy. In this game of bluff and bluster, Karzai sees in India an important card to play against Pakistan.

China’s rise may have emboldened Pakistan, but it’s perhaps just the reverse for Vietnam—it has long felt nervous and vulnerable about Beijing’s hegemonic tendencies in the South China Sea. Last month, Vietnam’s decision to enter into a joint oil exploration project with India in the South China Sea was contested by Beijing, which claims ownership of much of the resources there. No wonder, Vietnam and India have begun to increasingly view each other as strategic partners who are synchronising their steps across many domains—from economic cooperation and trade to capacity building, defence and security. With Vietnamese president Sang by his side, Prime Minister Manmohan Singh harped on the need for the two countries to keep the sea-lanes free and secure.

But the emerging tapestry of alliances demands that countries strike a fine balance among contending powers. It does not mean a “zero sum game”—gains for one country and losses for another. So even as Sang was in India, Vietnam thought it prudent to send the general secretary of its ruling Communist Party to Beijing to engage with leaders there.

The quest to cultivate India saw Myanmarese President Thein Sein land in New Delhi a day after Sang’s departure. From the time Sein was elected president early this year, he has taken some momentous decisions—from releasing dissident leader Aung San Suu Kyi to granting greater freedom of operation to opposition parties. Perhaps the most surprising of his decisions was to stop work on the $3.6-billion, Chinese financed Myitsone hydro-electric power project recently. Over the past years, Myanmar has been reaching out to India to nurture options other than China, which enjoys a predominant influence over the leadership there. Again, Myanmar too sent its vice-president to Beijing to explain to its leadership why it has suspended work on the Myitsone project.

Is the inclination of these countries to woo India and yet not alienate China confusing? Raghavan provides the answer: “All the smaller neighbours are expanding their options so that they don’t end up being dominated by any single country. (But) the visit of the three presidents demonstrates that more countries in Asia are now keen to see India play a bigger role in the region, much beyond South Asia.” This strategy suits the Indian foreign policy establishment, which too believes that a growing web of engagement is the best answer to prevent a single power from dominating the region.