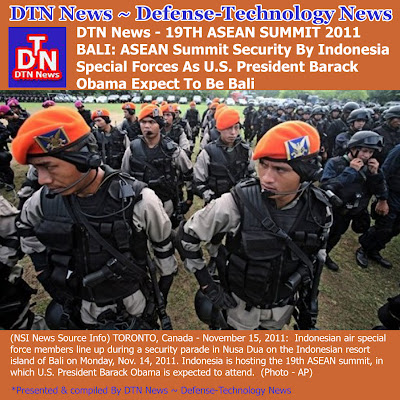 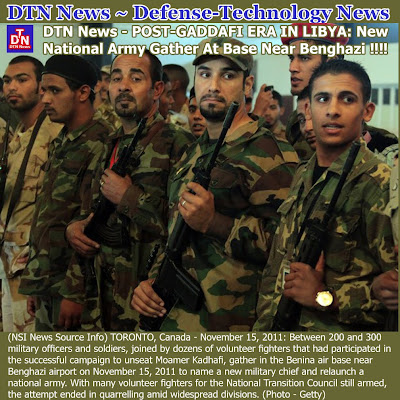 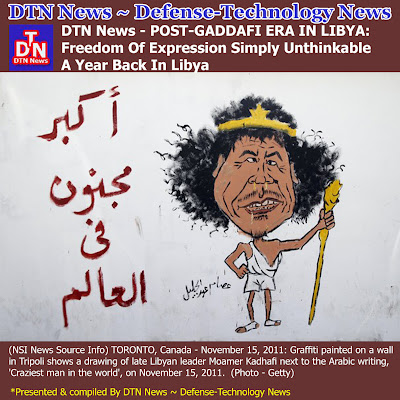 The Missile Defense Agency is announcing the award of a sole-source cost-plus-award-fee modification to Raytheon Missile Systems Co., Tucson, Ariz., under the HQ0006-10-C-0005 contract. The total value of this modification including options is $241,084,008, increasing the total contract value from $334,532,300 to $575,616,308. Under this modification, the contractor will continue to perform engineering services and material for systems engineering, design and development support, and initial hardware fabrication for the Standard Missile-3 Block IIA missile including divert and attitude control system mitigation. The work will be performed in Tucson, Ariz. The performance period is through March 31, 2012. Fiscal 2012 research, development, test and evaluation funds will be used to incrementally fund this effort. Contract funds will not expire at the end of the current fiscal year. This is not a Foreign Military Sales acquisition. The Missile Defense Agency, Dahlgren, Va., is the contracting activity. 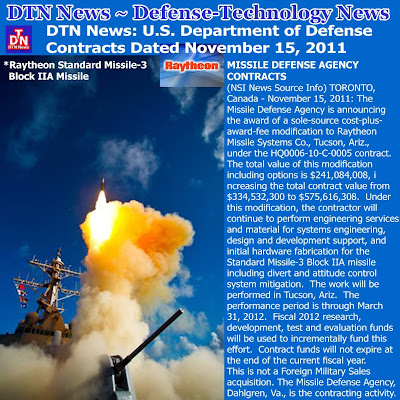 Source: DTN News
(NSI News Source Info) TORONTO, Canada - November 15, 2011: The Israeli Air Force (IAF) plans to begin operating an unmanned intelligence-gathering aerial vehicle with the ability to launch missiles that could 'fly as far as Iran', a report says.
Manufacturing the Heron TP, which in Israel is often referred to as the unmanned aerial vehicle (UAV) “that can reach Iran,” began in 2010 by Israel Aerospace Industries, the Jerusalem Post reported on Monday. 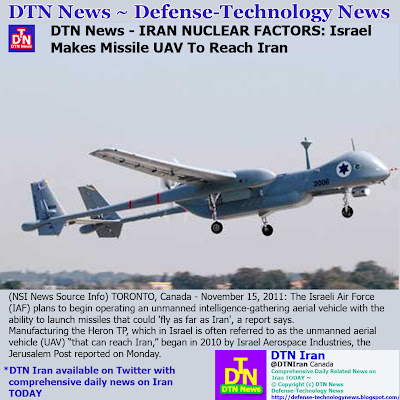 The IAF's largest UAV can fly for up to 45 hours, carry 1,000 kg payload and has the ability to launch missiles.
Amid the West's standoff with Iran over its nuclear program, both Tel Aviv and Washington have repeatedly threatened Tehran with the "option" of a military strike.
During a visit to the US in 2010, Israel's Prime Minister Benjamin Netanyahu demanded Washington launch a military attack against Tehran's nuclear program, saying that a “credible military threat by the United States is the only way to deter Iran.”
Netanyahu's call, however, was rejected by US Defense Secretary Robert Gates.
In May, a source close to prominent Iraqi cleric Muqtada al-Sadr said Israeli jet fighters had conducted drills at a military base in Iraq in order to strike targets inside Iran.
According to the report, a considerable number of Israeli warplanes, including F-15, F-16, F-18, F-22, and KC-10 jet fighters, were seen at al-Asad Airbase -- the second largest US military airbase in Iraq located in Anbar Province.
The report said that Iraqi officials had not been notified about the drills conducted in collaboration with the US military.
Iranian officials have stressed that any act of aggression by the US and Israel against Iran's nuclear facilities would meet a crushing response. They have repeatedly warned that any such measure could result in a war that would spread beyond the Middle East.
Iran is accusing Israel of running a covert campaign against its military and nuclear power (weapons, according to the UN) program. Iran has admitted that it is under attack by another powerful Internet weapon (similar to Stuxnet). Many Iranians are blaming Israel for the recent deaths of senior researchers and officials in the Iranian missile and nuclear programs. Israel says nothing.
Israel is speeding up equipping its airliners with anti-missile systems. The recent collapse of the Kaddafi dictatorship in Libya allowed several Libyan arms depots to be looted, and Israel believes arms smugglers have moved shoulder fired anti-aircraft missiles to Gaza and sold them to Hamas (who would use them against Israeli aircraft). Military aircraft already have anti-missile defenses (which detect the launch of the missile, then blind its guidance system with a laser.)
Israeli forces are becoming more successful in detecting and attacking Islamic terrorists in northern Gaza while rockets are moved and set up for firing. The use of UAVs and constant helicopter and aircraft patrols, plus intel on terrorist plans, has made it more dangerous to launch rockets.
In Gaza, Hamas is enjoying a jump in popularity because of the recent prisoner exchange (one Israeli soldier for over a thousand Palestinians), but there have also been more calls in Gaza for Hamas to release some of the hundreds of political prisoners it holds. Those who openly oppose Hamas in Gaza end up in jail, or worse. Hamas has been declining in popularity over the last few years, and is believed that it would lose another election. For that reason, Hamas has no plans to allow any more elections until it can get its poll numbers up.
November 8, 2011: The UN released a report accusing Iran of developing nuclear weapons. This is the first time the UN went that far. Israel has long been expected to attack Iran (as they did Iraq and Syria) if they felt their foe was getting too close to having nuclear weapons. But Israel refused to respond to the report.
November 6, 2011: Over the last few days, Israeli government websites have been attacked, and some were unavailable for hours. This was believed to be retaliation for recent attacks on Palestinian web sites. There was also leftist anger at the Israeli seizure of two ships that tried to break the Gaza blockade.
November 5, 2011: Israeli warplanes attacked Islamic terrorists in Gaza, in retaliation for rocket attacks on Israel.
November 3, 2011: Israeli warplanes attacked Islamic terrorists in Gaza, in retaliation for sniper attacks on Israeli troops along the border.
November 2, 2011: Israel test fired another of its Jericho 3 ballistic missiles (with a range of up to 5,000 kilometers).
November 1, 2011: The Israeli government has told its armed forces commanders to do whatever is necessary to halt the rockets being fired from Gaza into southern Israel. This would include another ground offensive. This order was given largely because the Islamic terrorists in Gaza are using longer range (up to 20 kilometers) rockets that can hit a larger number of more thickly populated areas.
*Link for This article compiled by Roger Smith from reliable sources Strategy Page & PressTV
*Speaking Image - Creation of DTN News ~ Defense Technology News
*This article is being posted from Toronto, Canada By DTN News ~ Defense-Technology News
Contact:
dtnnews@ymail.com

Source: DTN News - - This article compiled by Roger Smith from reliable sources APEC
(NSI News Source Info) TORONTO, Canada - November 15, 2011: During the course of this week's APEC meetings, President Obama had the opportunity to continue his regular dialogue with Prime Minister Harper of Canada regarding the enduring partnership and friendship between our two countries at home and around the world. 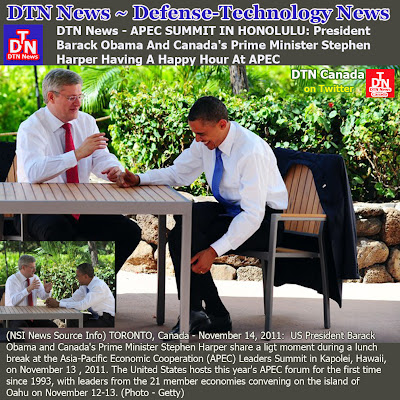 The President underscored the importance of working together to enhance economic competitiveness, create sustainable economic growth and jobs. He noted the important progress being made on the Beyond the Border and Regulatory Cooperation initiatives.
The President also welcomed Prime Minister Harper's expression of Canada's interest in seeking to join the Trans-Pacific Partnership talks and initiating consultations toward that goal. The Leaders discussed the importance of meeting the TPP's high standard for trade liberalization and addressing outstanding trade and investment issues in that process.
Together with Japan's and Mexico's similar announcements, Canada's desire to consult with TPP partners demonstrates the broadening momentum and dynamism of this ambitious effort toward economic integration across the Pacific.
President Obama thanked the Prime Minister for Canada's participation in the successful operations in Libya, including the leadership of Canadian General Charles Bouchard. The President also expressed his appreciation for the role the Canadian Forces have played, and continue to play in Afghanistan. The Leaders discussed the recent announcement regarding the Presidential Permit process for the Keystone XL pipeline application. The President underscored his support for the State Department's announcement regarding the need to seek additional information about the Keystone XL Pipeline proposal to ensure that all questions are properly addressed and all the potential impacts are properly understood.
Both leaders expressed their condolences to President Calderon, the family, and the Mexican people on the death of Mexican Interior Minister Francisco Blake Mora and seven colleagues. They look forward to a rescheduled North American Leaders' Summit with President Calderon.
The President also invited the Prime Minister to Washington in early December.
Related Images: 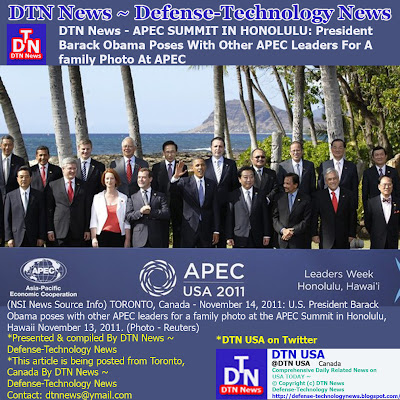 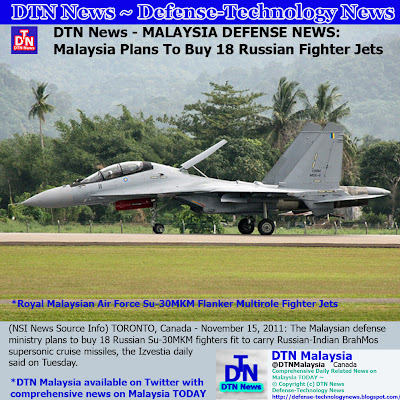