Northrop Grumman Systems Corp., Defense Systems Division of Herndon, Va. was awarded a $49,694,900 contract which will research, develop, and deliver an integrated software solution that improves upon the targeting functionality currently performed by Air Force and joint targeting automation software. At this time, $2,173 has been obligated. Air Force Research Laboratory/RIKF, Rome, N.Y., is the contracting activity (FA8750-11-D-0001; basic orders 0001 and 0002).

The Boeing Co., of Wichita, Kan., was awarded a $13,168,213 contract modification which will provide for Option Year II support for one of two special air mission aircraft assigned to the 89th Airlift Wing at Joint Base Andrews, Md., which provides air transportation for the President. At this time, the entire amount has been obligated. OC-ALC/GKSKB, Tinker Air Force Base, Okla., is the contracting activity (FA8106-09-C-0005; PO0022).

Hamilton Sundstrand Corp., Windsor Locks, Conn., is being awarded a $24,636,056 firm-fixed-price, indefinite-delivery/indefinite-quantity contract for procurement and installation of Electronic Propeller Control System kits into the C-130T aircraft for the Navy Reserves (up to 20) and the LC-130H aircraft for the Air Force National Guard (up to 5), including non-recurring engineering, technical and logistics services. Work will be performed in Windsor Locks, Conn. (65 percent), and Crestview, Fla. (35 percent), and is expected to be completed in December 2013. Contract funds will not expire at the end of the current fiscal year. This contracts combines purchases for the Navy Reserves ($20,490,770; 83 percent) and the Air Force National Guard ($4,145,286; 17 percent). This contract was not competitively procured. The Naval Air Systems Command, Patuxent River, Md., is the contracting activity (N00019-11-D-0008).

Lockheed Martin Simulation, Training & Support, Orlando, Fla., is being awarded a $7,360,467 modification to a cost plus fixed-fee contract (HR0011-10-C-0042). This award is for the National Cyber Range (NCR) program. The contractor will build on the preliminary design created in Phase I and tasks that have been accomplished in Phase II to date. At the completion of the revised Phase II program, the contractor will demonstrate the capabilities of the flexible automated Cyber Test Range NCR. The Phase I and Revised Phase II deliverables including the Concept of Operations and the Detailed Engineering Plan (DEP) are the basis of the revised Phase II effort. Work will be performed in Orlando, Fla. (69.810 percent); Cherry Hill, N.J. (16.262 percent); Princeton, N.J. (4.073 percent); Columbia, Md. (0.120 percent); Albuquerque, N.M. (1.033 percent); San Antonio, Texas (0.002 percent); Washington, D.C., (8.700 percent). The work is expected to be completed July 7, 2011. The Defense Advanced Research Projects Agency is the contracting activity. 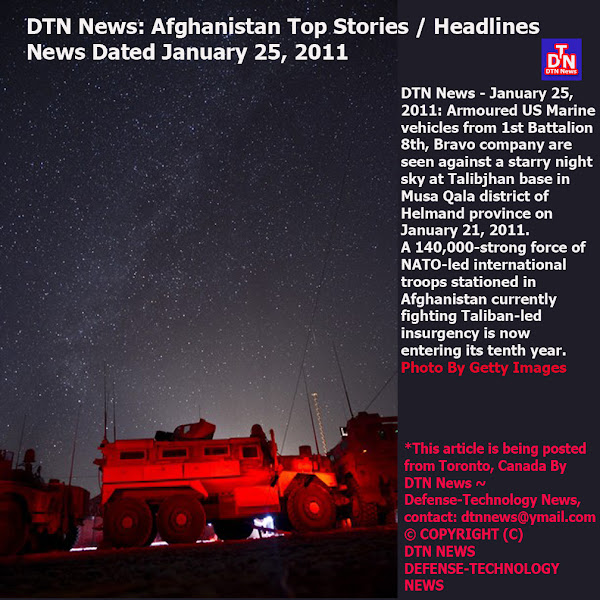 Germany's armed forces ombudsman has given a harshly critical assessment of training and leadership methods, just as a string of scandals threaten the reputation of the defense minister.

Brig. Sultan Amir died in the hands of a younger generation of militants in the tribal badlands of Pakistan — a victim of the vicious forces he helped create.

Duane Clarridge, who was indicted for lying to Congress about his role in the Iran-Contra scandal, doesn’t seem to have learned any lessons.

The Department of Defense has identified 1,451 American service members who have died as a part of the Afghan war and related operations.

The U.S. in Afghanistan

A reader responds to a recent article.

By RAY RIVERA and SHARIFULLAH SAHAK

Western officials worry that President Hamid Karzai may try to expel security companies faster than his government can replace them with an Afghan force.

A network of spies run by Duane R. Clarridge shows how private citizens can exploit the chaos of rivalries inside the government to carry out their agenda.

January 22, 2011
MORE ON AFGHANISTAN AND: LEGISLATURES AND PARLIAMENTS, POLITICS AND GOVERNMENT, KARZAI, HAMID

The Department of Defense recently confirmed the deaths of the following Americans.

An Italian soldier who had been reported killed by insurgents in western Afghanistan this week was instead killed by an Afghan soldier, the NATO-led coalition said Thursday.

Legislators vowed to open the new Parliament session as scheduled on Sunday, setting up a clash with President Hamid Karzai.

America is but the latest in a long list of foreign powers that have sought to bend Afghanistan to its will.

President Hamid Karzai’s decision, following the recommendation of a court studying electoral fraud, puts him at odds with his international supporters.

Mohammed Ishaq Aloko said in an interview that he expected the September voting for Parliament to be nullified because of widespread fraud.

Since the Marines took over responsibility for Sangin District from the British, progress has come slowly.

Pakistan’s Failure to Hit Militant Sanctuary Has Plus Side for the U.S.

Pakistan’s refusal to attack militants in an area on its northwest border has made it easier for American drones to strike them.

In “The Longest War: The Enduring Conflict Between America and Al-Qaeda,” Peter L. Bergen draws on the work of others, his own analysis and a broad range of interviews.

The country’s Ministry of Finance said American and European contractors are resisting the Afghan government’s efforts to tax them.

Embedistan: Outside the Wire, Off the Message

By RICHARD A. OPPEL JR.

Done properly, an embed requires at least one week with a small unit, usually a platoon or company, and going out with them every day.

Bigger Afghan Army and Police Force Expected to Be Approved

By THE ASSOCIATED PRESS

The inquiry comes four months after a weeklong run on Kabul Bank by depositors.

An Afghan presidential commission has determined that military operations in the Kandahar area have caused more than $100 million in damage to homes and farms over the past six months.

Accused Soldier Stays in Brig As WikiLeaks Link Is Sought

Supporters of Pfc Bradley Manning, soldier accused of leaking secret documents to WikiLeaks, are concerned he is being treated unfairly; Manning is locked in tiny cell at Quantico Marine Corps Base in Virginia, while WikiLeaks founder Julian Assange is living on supporter's 600-acre estate; while members of Congress denounce both men's actions as criminal, Justice Department is still looking for charge it can press against Assange; experts say one approach is to link two men in conspiracy to di...

Soldier Trent Reedy steps up to help an Afghan girl

Trent Reedy was an American soldier providing security for the reconstruction of Afghanistan when he saw her. The girl was 13, her cleft lip...

British troops who have served there tend to depart from standard military terminology when they talk about what kind of place it is. They...

A showdown between President Hamid Karzai and his country's newly elected parliament was averted late Saturday when the Afghan leader agreed...

Marines tell of snipers who fire from "murder holes" cut into mud-walled compounds. Fighters who lie in wait in trenches dug around rough...

In Pakistan, Islamic hard-liners expanding their grip on society

Above a dank, darkened teahouse pungent with the aroma of green chili peppers, a bright blue banner depicts a neighborhood cleric, Qari...

They were on their way to a rural health clinic — men, women and children packed aboard a motorized rickshaw, one of the humblest...

Winter in Afghanistan is always a hardscrabble time, but this year the season's bite has been sharpened by a growing shortage of fuel. And...

Roadside bombs killed at least 17 Afghan civilians in a 24-hour span, including nine people — a child among them — whose vehicle...

A U.S. Marine shot and killed an Afghan policeman who pointed a weapon at him Saturday, Western military officials said. The incident took...

Danielle Katz has a limited Pashto vocabulary — limited but significant.

Targeting extremists is the best way to strengthen Pakistan, Vice President Joe Biden said Wednesday as he defended an aggressive pursuit of...