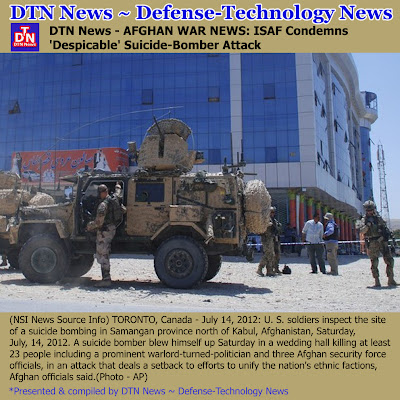 A suicide attacker blew himself up at the entrance to a wedding hall in Aybak, the province's capital, officials said, noting the blast killed at least 19 people and wounded more than 43 others.
Ahmad Khan Samangani, a member of the Afghan parliament; Mohammad Khan, the provincial director of the National Directorate of Security; and Lt. Gen. Said Ahmad Samse were among those killed in the attack, officials said.
Regional Command-North is providing medical and surgical assistance to the injured, according to a RC-North news release issued today.
The International Security Assistance Force stated in a release issued today that it "strongly condemns this senseless and cowardly act of insurgent terror that resulted in the murder of innocent civilians. These despicable acts continue to disrupt peace and demonstrate an utter lack of respect for Afghan lives."
"Once again the Taliban have murdered Afghans in cold blood with complete disregard for innocent life or to the sanctity of a wedding," ISAF commander Marine Corps Gen. John R. Allen stated in the release. "Their depravity clearly knows no bounds. The disgust of the Afghan people for these criminals only continues to grow.
"ISAF continues to stand with the noble people of Afghanistan and we offer our assistance in solving this crime," Allen continued. "I offer my sincerest condolences and prayers to the family and friends who are suffering from the loss of their loved ones."
ISAF "remains committed to stopping acts of terror together with Afghan National Security Forces in order to build a secure environment that promotes lasting peace and a secure way of life for the Afghan people," the command's release said.
*Link for This article compiled by Roger Smith from reliable sources ISAF Joint Command News Releases ~ American Forces Press Service*Speaking Image - Creation of DTN News ~ Defense Technology News *This article is being posted from Toronto, Canada By DTN News ~ Defense-Technology News Contact:dtnnews@ymail.com ©COPYRIGHT (C) DTN NEWS DEFENSE-TECHNOLOGY NEWS