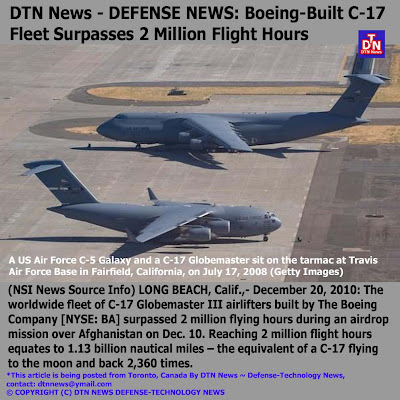 The representative mission, flown by a U.S. Air Force C-17, airdropped 74,000 pounds of jet fuel in support of U.S. and coalition troops just south of Kabul.

The C-17 has a mission readiness rate of more than 85 percent. It is the world's only strategic airlifter with tactical capabilities that allow it to fly between continents, land on short, austere runways, and airdrop supplies precisely where they are needed.

"There's tremendous satisfaction in knowing that in those 2 million hours, the C-17 fleet has saved countless lives around the world," said Bob Ciesla, Boeing C-17 program manager. "Boeing congratulates the U.S. Air Force and our international C-17 customers on reaching this milestone. We’re very proud that the C-17 continues to exceed expectations for performance and reliability."

The C-17 fleet, now in its 17th year of service, has supported humanitarian and disaster-relief missions worldwide. With 226 airlifters in service around the world, the C-17 fleet continues to operate at an accelerated rate due to the recent troop surge in Afghanistan, reaching the 2 million flight-hours milestone less than five years after reaching 1 million flight hours in March 2006, when 152 C-17s were in service. This year, lifesaving aeromedical evacuations of wounded troops from Afghanistan and Iraq, along with relief missions for natural disasters such as earthquakes in Pakistan, Chile and Haiti, have intensified the C-17's normal workload.

Boeing helps keep the C-17 flying through a worldwide support and sustainment program. "Boeing has had the honor of supporting the entire C-17 fleet since the delivery of the first aircraft to Charleston Air Force Base in 1993," said Gus Urzua, program manager for the Boeing C-17 Globemaster III Sustainment Partnership. "Through innovative Performance-Based Logistics contracting and partnering with the Air Force, we have maintained the highest level of aircraft readiness while continuously reducing the cost of ownership."

While providing relief to Haiti in January and February, C-17s delivered nearly 14,000 short tons of cargo and transported some 25,000 passengers and 280 patients. C-17s also played a key role in a record year for airdrops in support of Operation Enduring Freedom in Afghanistan. As of Oct. 31, C-17s and other airlifters have airdropped more than 45 million pounds of cargo to troops in remote locations.

Boeing has delivered 20 C-17s to international customers. The U.S. Air Force -- including active duty, National Guard, and Air Force Reserve units -- has taken delivery of 206. Other customers include the U.K. Royal Air Force, the Canadian Forces, the Royal Australian Air Force, the United Arab Emirates Air Force, the Qatar Emiri Air Force, and the 12-member Strategic Airlift Capability initiative of NATO and Partnership for Peace nations. India is expected to be the next C-17 customer.