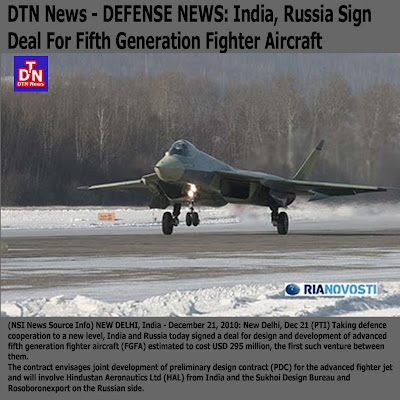 The contract envisages joint development of preliminary design contract (PDC) for the advanced fighter jet and will involve Hindustan Aeronautics Ltd (HAL) from India and the Sukhoi Design Bureau and Rosoboronexport on the Russian side.

The pact was signed on the margins of a meeting between Prime Minister Manmohan Singh and Russian President Dmitry Medvedev, during which the two sides also discussed their defence relationship which is transforming from a buyer-seller format to one that includes joint research and development, manufacturing and marketing activities.

According to reports, the deal is expected to be worth over USD 295 million and the design of the aircraft is likely to be finalised within next 18 months.

The Indian Air Force (IAF) has plans of acquiring 250-300 of these aircraft by the year 2030. Single and twin seat versions of the aircraft are expected to be developed and the plane will be ready for flying by 2017.

The FGFA would be based on Sukhoi''s T-50 aircraft, which made its maiden flight in January this year.

During their meeting, the two leaders also expressed satisfaction at the regular service-to-service interactions and joint exercises that have taken place between their countries.

Since the Cold War era, Russia has been the biggest military hardware supplier to India and the Indian armed forces rely heavily on that country.

Though India has been working to diversify its military imports, still the bulk of the hardware with the three defence forces is of Russian origin including frontline Su-30 MKI fighter aircraft and T-90 and T-72 tanks.

Voice of America - Anjana Pasricha - ‎15 minutes ago‎
Photo: AP India and Russia have signed defense and civil nuclear deals worth billions of dollars during a visit by the Russian President Dmitry Medvedev to ...

Medvedev in India: completing the set

Financial Times (blog) - Barney Jopson - ‎1 hour ago‎
And then there were five. With the arrival of Dmitry Medvedev in New Delhi on Tuesday, India has completed an impressive diplomatic quintet. ...

The Hindu - ‎3 hours ago‎
PTI The Hindu Prime Minister Manmohan Singh shakes hands with Russian President, Dmitry Medvedev (left) prior to meeting and signing of agreements at the ...

The Hindu - ‎4 hours ago‎
PTI Taking defence cooperation to a new level, India and Russia on Tuesday signed a deal for design and development of advanced fifth generation fighter ...

BBC News - ‎5 hours ago‎
Russia and India are expected to sign billions of dollars worth of defence and nuclear deals during the Russian president's visit to India which starts ...

Wall Street Journal - Tom Wright - ‎5 hours ago‎
NEW DELHI—India and Russia on Tuesday signed a number of economic and defense agreements as Moscow moved to shore up its relationship with New ...

Reuters - ‎5 hours ago‎
NEW DELHI Dec 21 (Reuters) - The first nuclear reactor of India's Kudankulam power plant, built by Russia's Rosatom, will be launched by the end of the ...

India, Russia to step up cooperation on Afghanistan: PM

Hindustan Times - ‎10 hours ago‎
India and Russia will firm up the blueprint for strategic partnership for the next decade when PM Manmohan Singh holds his 11th annual summit meeting with ...

Rusi topi, red or not

Economic Times - ‎12 hours ago‎
With Russian President Dmitry Medvedev's current visit, leaders of all the five permanent members of the UN Security Council have visited India in the last ...

The Return of Glasnost