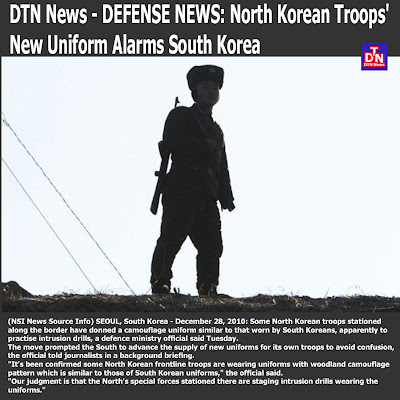 The move prompted the South to advance the supply of new uniforms for its own troops to avoid confusion, the official told journalists in a background briefing.

"It's been confirmed some North Korean frontline troops are wearing uniforms with woodland camouflage pattern which is similar to those of South Korean uniforms," the official said.

"Our judgment is that the North's special forces stationed there are staging intrusion drills wearing the uniforms."

The South's military has begun supplying new "digital camouflage" uniforms and is considering speeding up the distribution following the North's move.

The North is believed to have some 200,000 special forces and to have deployed some 50,000 of them along the border with the South, the ministry said.

Tensions are high following the North's shelling last month of a South Korean border island, which killed four people including civilians. The South's forces are on alert for any fresh attacks.

China is getting tougher with South Korean spies caught collecting intelligence there on North Korea, jailing one of them for more than a year despite pleas from Seoul, news reports said Tuesday.

The army major had been trying to collect information on the North's nuclear and missile programmes when he was caught in July last year in a sting operation, Yonhap news agency and the Korea JoongAng Daily said.

The newspaper said the man it identified as Major Cho was arrested in the northeastern Chinese city of Shenyang following a rendezvous with a Chinese military officer posing as an informant.

Cho gave tens of thousands of dollars to the Chinese officer for information about the North's nuclear development and missiles, it said. He was jailed for 14 months despite the South's request that he be repatriated.

A captured agent is usually released and repatriated after his home country promises in writing to prevent a recurrence, the Korea Joongang Daily said.

Cho's imprisonment also caused unrest among South Korean intelligence agents because he was repatriated along with South Korean criminals who had been arrested for robbery or fraud, it said.

The paper quoted intelligence officials as saying Cho may have been treated in a tougher fashion than normal because he was arrested at a sensitive time, just after the North's second nuclear test in May 2009.

China is the North's sole major ally and economic lifeline.

White Paper Must Show Will to Defend Ourselves

The Chosun Ilbo - ‎3 hours ago‎
The Defense Ministry's white paper due out on Thursday states that North Korea "poses a serious threat to security by developing and augmenting massive ...

Hindustan Times - ‎4 hours ago‎
North Korea said on Wednesday its new uranium enrichment plant is designed solely to produce energy, hitting back at the United States for questioning its ...

Bernama - ‎5 hours ago‎
SEOUL, Dec 29 (Bernama) -- One of South Korea's major foreign policy goals for next year is to win international support for its plan to promote peaceful ...

TODAYonline - ‎10 hours ago‎
SEOUL - South Korea's military is alarmed that North Korean front-line troops have adopted a woodland camouflage uniform similar to its own, according to a ...

JoongAng Daily - ‎17 hours ago‎
An old New York Times article titled “Here There Be Monsters” about the South Korean craze for the horror movie “The Host” (2006) gave me the idea that the ...

JoongAng Daily - Lim Soo-ho - ‎17 hours ago‎
This is the first time since the nuclear crisis in the early 1990s that South Korean, US and Japanese policies toward Pyongyang are in synch. ...

Korea Times - Kim Rahn - ‎21 hours ago‎
Domestic violence among North Korean defector couples is much more serious than that among South Korean couples, according to the Gender ...

Korea Times - Lee Tae-hoon - ‎22 hours ago‎
China expelled a South Korean Army major on charges of espionage this year after more than a year of post-trial detention there for ...

Korea Times - Kang Hyun-kyung - ‎22 hours ago‎
Lately, Seoul has shown signs of toning down things that North Korea must do to open up dialogue with the five other members of the six-party talks to end ...

It isn't over yet!

AFP - ‎Dec 28, 2010‎
SEOUL — Some North Korean troops stationed along the border have donned a camouflage uniform similar to that worn by South Koreans, apparently to practise ...
*This article is being posted from Toronto, Canada By DTN News ~ Defense-Technology News, contact: dtnnews@ymail.com