Source: DTN News - - This article compiled by Roger Smith from reliable sources By Gopal Ratnam and Viola Gienger - Bloomberg
(NSI News Source Info) TORONTO, Canada - December 15, 2010: Israel’s ambassador to the U.S., Michael Oren, said his country is still seeking 20 additional F- 35 fighter jets even after the failure of a U.S. offer to provide the planes in exchange for a freeze on Israeli settlement construction.

The 20 jets would be in addition to the 20 Lockheed Martin Corp.-built F-35 Joint Strike Fighters, valued at about $2.8 billion, that Israel ordered in October, Oren told Bloomberg News reporters and editors in Washington yesterday. 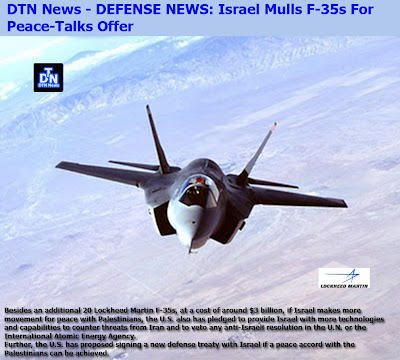 “It was clear from the beginning that the 20 we were purchasing would not be enough and we’d require more,” Oren said. The F-35 planes are the “ballast in helping Israel maintain its qualitative military edge” over potential foes in the region, he said.

Defense officials from both countries are discussing ways to pay for the “expensive” jets because Israel lacks the funds, Oren said.

The U.S. had offered the 20 additional F-35 jets as part of an effort to revive direct Middle East peace talks between Israel and the Palestinian Authority, which stalled after an earlier freeze on West Bank settlement construction ended in September. Israel’s Lieutenant General Gabi Ashkenazi confirmed the offer at a Nov. 17 news conference at the Pentagon.

The Obama administration said last week that it would stop pushing Israel for a renewed 90-day construction moratorium.

“The 90-day extension discussion is off the table but the 20 extra jets are very much on the table,” Oren said. “It’s not attached to the 90-day freeze.”

Discussion on providing Israel with an additional set of 20 F-35 jets began around mid-year, part of a longstanding U.S. undertaking to help Israel “defend itself against any Middle East adversary or a combination of adversaries,” Oren said. “It wasn’t a bribe, and was not intended to be a bribe, but part of ongoing discussions.”

Recent U.S. sales of weapons to the Middle East, including the proposed transfer of arms to Saudi Arabia, have eroded Israel’s military edge against nations in the region that have larger defense budgets than Israel, Oren said.

The U.S. currently provides Israel $3 billion annually in military aid. The program isn’t as sufficient to buy protection as it had been 20 years ago when it began, Oren said.

In October, the Obama administration told Congress of plans to sell Saudi Arabia arms valued at $60 billion, which may be the largest weapons sale to another country in U.S. history if all purchases are made.

To contact the editors responsible for this story: Mark Silva at msilva34@bloomberg.net;