Source: DTN News - - This article compiled by Roger Smith from reliable sources The Telegraph UK
(NSI News Source Info) TORONTO, Canada - December 24, 2010: An 15th century Ethiopian icon of the infant Christ child sitting on his mother's knee was discovered after it was cleaned by a British charity. 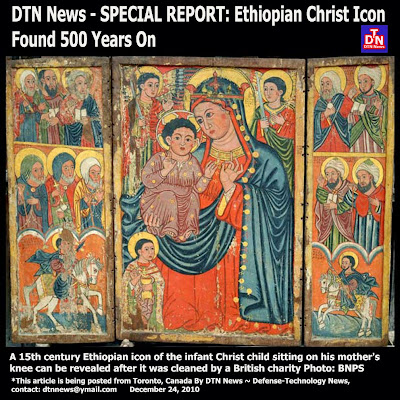 The central panel of the triptych had over the centuries become blackened with the sprinkling of perfume that the monks use as they worship.

His hand has three digits raised and two down as if blessing the person looking at him.

He has a halo and is wearing a gown and is perched on his mother's knee and she too has a halo.

The monks at the Monastery of St Stephen on an island in Lake Hayq in the north of the African country believe the icon, known as The One Who Listens, to be miraculous.

The artist had great skill, which is particularly obvious in the detail of Mary's robes.

In the central panel are three other figures, two archangels, Michael and Gabriel, armed with swords ready to protect the saviour and the third, St Stephen, after whom the monastery is named.

The side panels have 12 figures upon them all looking inwards towards the central picture.

They include Abuna TeklelyesusMoa, who sponsored the work, various saints including St Peter and St Paul, and abbots from the monastery.

It is one of the most celebrated icons in Ethiopia and is now housed in a special museum with other ancient relics.

The British charity The Ethiopian Heritage Fund sent experts to preserve the painting that had previously been covered with varnish.

Blair Priday from the charity, said: "This icon is one of the most celebrated in Ethiopia and because of its veneration, over time, the central panel had become blackened and was later painted over with thick layers of varnish as protection.

"The faces of the mother and child were barely visible.

"The varnish was carefully removed so it regained the original luminosity.

"The icon's repair was undertaken by Laurie Morocco, a foremost icon restore, who camped in the monastery's grounds while he did the work.

"In the mid 15th century a new technique of painting on wood with an undercoating of Gesso was introduced resulting in a much more luminous effect.