DTN News - DEFENSE NEWS: Netanyahu To Mubarak: Israel And Egypt Must Stand United Against Terrorism
**PM reacts to church bombing in Alexandria which killed 21 people; Netanyahu to meet with Egyptian president next week to discuss deadlock in peace process. 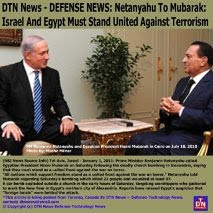 "All nations which support freedom stand as a united front against the war on terror," Netanyahu told Mubarak regarding Saturday's bombing which killed 21 people and wounded at least 97.

A car bomb exploded outside a church in the early hours of Saturday, targeting worshippers who gathered to mark the New Year in Egypt's northern city of Alexandria. Reports have relayed Egypt's suspicion that "foreign hands" were behind the attack.

Earlier Saturday, Mubarak, in a televised address, vowed to put a stop to terrorism, saying that the terrorists would fail in any plans to destabilize Egypt or divide Muslims and Christians.

Moreover, Netanyahu is due to arrive in Cairo on Thursday to meet with Mubarak and discuss the deadlock in peace talks between Israel and the Palestinians.

Netanyahu sent his National Security Adviser Uzi Arad to Cairo on Tuesday, to meet with the Egyptian intelligence chief Omar Suleiman, in order to prepare for Netanyahu's meeting with Mubarak. Arad spoke with Suleiman about the peace process impasse, the situation in the Gaza Strip, and Iran.

Paid Distribution
Why Obama Is Breaking Up With DemocratsThe Root

Egypt FM: We are not seeking to acquire nuclear weaponsHaaretz - News

As Netanyahu's coalition struggles, Peres may need to step inHaaretz

Netanyahu to Mubarak: Israel and Egypt must stand united against terrorism7 comments

Report: U.S. in secret talks with Syria over peace accord with Israel34 comments

Barak Ravid is the diplomatic correspondent for Haaretz newspaper. He joined Haaretz in April 2007, covering the Prime Minister's Office, the Foreign Ministry and the Ministry of Defense, dealing with issues such as U.S.-Israeli relations, EU-Israeli relations and the peace process.

Before joining Haaretz, Barak Ravid worked for two years for Maariv daily newspaper, spending a year covering the Palestinian Authority and a year as a diplomatic correspondent.

Ravid has a BA in the history of the Middle East from the University of Tel Aviv. He served for six years as an officer in the Israel Defense Forces, and concluded his service with the rank of captain. He and his wife live in Tel Aviv.