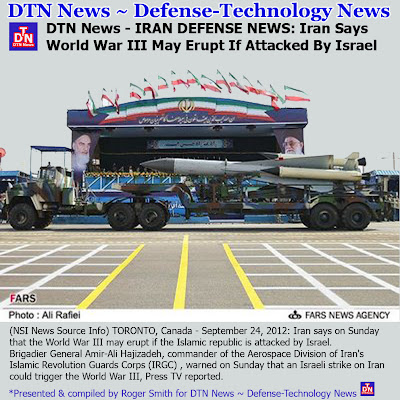 Israel, threatening to destroy Iran's nuclear facilities these days, has always been highly concerned over Iran's nuclear program, which is believed by the West to head for acquiring nuclear weapons under the cover of civilian purposes.
Iran has insisted that its nuclear program is solely for peaceful purposes, and warned that it will retaliate if it comes under attack.
Hajizadeh said in case of the eruption of such a war against Iran, the situation would be out of control, according to Press TV.
"This war is likely to degenerate into the World War III," Hajizadeh said, adding that it means some countries might enter the war in favor of or against Iran.
"We see the United States and the Zionist regime (of Israel) alongside one another and we can by no means imagine that the Zionist regime would initiate a war (against Iran) without the U.S. support," he was quoted as saying.
"The Islamic Republic of Iran considers the U.S. bases in the region as part of American soil and will definitely target them if a war breaks out," he added.
On Saturday, Iran's Commander of the IRGC, Major General Mohammad Ali Jafari, said that a war on Iran "will eventually happen," Press TV reported.
"War will happen but it is not clear where and when," Jafari said, adding that Iran is ready to confront any possible strike against the country.
The Israeli officials currently consider war as the only way to confront Iran, he claimed, insisting that if they begin a war, it will spell their destruction and will be the end of their adventure.
The Iranian commander said that the armed forces of the Islamic republic enjoy capabilities and equipment in hardware and software fields, according to the report.
Also, Hossein Salami, another IRGC commander, reiterated the remarks by Jafari on Sunday that "Iran will obliterate the Zionist regime if the latter takes any action against Iran," the official IRNA news agency reported.
Salami said Iran does not initiate war against any country but in case it is attacked by any country it will never stop its counterattack till the annihilation of the enemy.
Also on Sunday, Press TV reported that Iran's Air Force plans to hold a massive military maneuver in the southern parts of the country by the end of the current Iranian calendar year (March 2013).
"Maneuvers to be carried out by Iran are peaceful and indicate that Iran and regional countries are capable of safeguarding their security," Deputy Commander of Iran's Air Force, Brigadier General Aziz Nasirzadeh, was quoted as saying.
Nasirzadeh said that the presence of non-regional powers in the Persian Gulf is "illegitimate" and emphasized that there is no necessity for such a presence.
Non-regional powers cannot provide regional states with security, he said, adding that the countries in the region can ensure their security if they cooperate with each other.
According to IRNA, IRGC will also hold a 15,000-man maneuver in Shahr-e-Rey district of Tehran city for two days from September 27- 28.
IRGC Commander in charge of the operations, General Nasiri told IRNA that the exercises aim to raise combat readiness of the ground forces.
Nasiri said that the troops will conduct shooting, night war, relief and rescue operations, said the report.
Related:
Iran closely monitors U.S.-led naval drill in Persian Gulf
TEHRAN, Sept. 21 (Xinhua) -- A senior Iranian navy commander said that Iran's Armed Forces fully are monitoring the naval exercises of the United States and its allies in the Persian Gulf, Press TV reported on Friday.
The United States and its allies are performing the maneuvers in the Persian Gulf under the pretext of improving security but history has proven the falsehood of their claims, Second Rear Admiral Hossein Azad was quoted as saying.   Full story
Iran launches submarine, destroyer as U.S. continues drill in Persian Gulf
TEHRAN, Sept. 18 (Xinhua) -- Iran's Navy launched the overhauled super-heavy submarine and indigenous destroyer on Tuesday as the United States and its allies continued military drills in the Persian Gulf for the third day.
The super-heavy Tareq 901 submarine repaired by Iranian experts and Sahand destroyer were successfully launched in Iran's southern port of Bandar Abbas, Press TV reported.  Full story
EU foreign policy chief meets Iranian negotiator on nuclear issue
ISTANBUL, Sept. 18 (Xinhua) -- EU foreign affairs representative Catherine Ashton held talks withIran's chief nuclear negotiator Saeed Jalili here on Tuesday in a bid to end the standoff over the Iranian nuclear program.
The two sides had a 40-minute close-door meeting in Istanbul's Conrad Hotel Tuesday afternoon and then moved to Iranian consulate general in Istanbul for more talks during dinner. Full story
*Link for This article compiled by Roger Smith from reliable sources Xinhuanet
*Speaking Image - Creation of DTN News ~ Defense Technology News
*This article is being posted from Toronto, Canada By DTN News ~ Defense-Technology News Contact:dtnnews@ymail.com
©COPYRIGHT (C) DTN NEWS DEFENSE-TECHNOLOGY NEWS