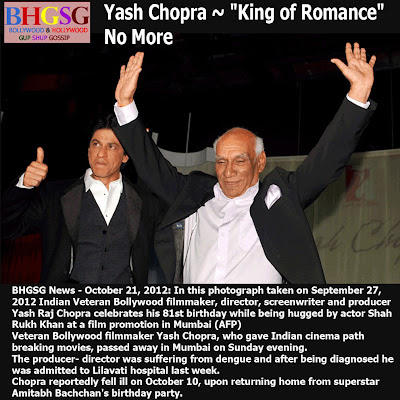 The producer- director was suffering from dengue and after being diagnosed he was admitted to Lilavati hospital last week.
Chopra reportedly fell ill on October 10, upon returning home from superstar Amitabh Bachchan's birthday party.

Yash Chopra was on life support-system for some time now. According to hospital reports Mr Chopra suffered from multiple organ failure.
Yash Raj Films issued a statement to the media, saying: "Yash Chopraji breathed his last at around 5.30pm today (IST). Details of his last rites will be communicated later."
The 80 year old legend was working on his up coming movie 'Jab Tak Hai Jaan' and announced his retirement after the movie.

After the filmmaker was admitted speculations were rife about his movie being delayed. 'Jab Tak Hai Jaan' will remain his unfinished movie as he was yet to shoot a romantic song between lead actor Shah Rukh Khan and Katrina Kaif.
Great loss to Indian cinema
Film director Subhash Ghai said to media: "It's a great loss to Indian cinema. Yashji had always said he wants to die making films.

"He was full of energy; an inspiration truly."
Regarded as the country's king of celluloid romance, Chopra has also proved his mettle with intensely emotional and tragic movies, many of which went on to become box-office blockbusters.
Born in 1932 in Lahore, now in Pakistan, the film-maker was favoured by leading Indian actors with his movies seen as a sure-fire way to become a hit with audiences.
Chopra has made some of Indian cinema's most memorable films such as Deewar, Kabhi Kabhie, Silsila and Chandni. His flamboyant style of film-making, movies filmed in exotic locales and mellifluous music became a hallmark, endearing him to filmgoers.
Chiffon sarees and the Swiss Alps are so synonymous with Chopra's style of film-making that Switzerland Tourism even offered visitors a guided tour of the places where the director filmed some of his most famous songs and scenes.
Riding on his success, Chopra established Yash Raj Films, one of Bollywood's biggest production houses, churning out at least three movies a year. In November, the film studio announced its foray into Hollywood, signing on actors such as Nicole Kidman and Jason Bateman for its overseas productions.
Chopra also produced Indian cinema's longest-running blockbuster, Dilwale Dulhania Le Jayenge (1995), which marked the debut of his son Aditya as director.
"I have never made romantic films. I have made films on human relations, and humans are complicated people," Chopra said in a recent interview.
*Link for This article compiled by Roger Smith DTN News for BHGSG News
*Speaking Image - Creation of DTN News ~ Defense Technology News
*This article is being posted from Toronto, Canada By DTN News ~ Defense-Technology News Contact:dtnnews@ymail.com
©COPYRIGHT (C) DTN NEWS DEFENSE-TECHNOLOGY NEWS