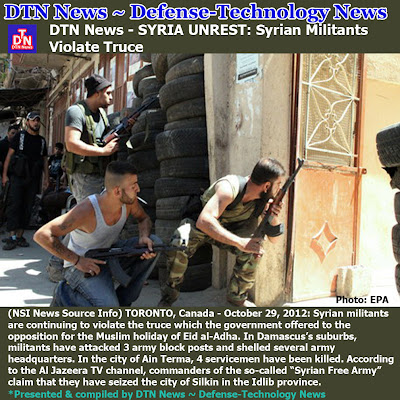 According to the Al Jazeera TV channel, commanders of the so-called “Syrian Free Army” claim that they have seized the city of Silkin in the Idlib province.

Initially, it was planned that the truce would last until Monday, but political observers doubt that the government will refrain from using force until that time in such a situation.

Saudi authorities disperse Syrian rebels' protest in Mecca
Saudi authorities quickly dispersed a protest by hundreds of Syrian pilgrims calling for the fall of Syrian President Bashar al-Assad and denouncing what they said was international failure to stop bloodshed in Syria.

Protesters held up rebel flags and marched toward the Jamarat Bridge in Mina, east of the Saudi Arabian city of Mecca, where more than 3 million Muslim pilgrims congregated for the annual haj.

No one was hurt when two police vehicles drove slowly in the direction of the protesters with the sirens on as the officers asked the crowd through loudspeakers to leave the area. The protesters swiftly dispersed and merged with thousands of other pilgrims in the area, the witness said.

Saudi officials made it clear in recent days that they want a politics-free pilgrimage and urged pilgrims to focus on performing the rituals.

The haj pilgrimage is one of the Muslim faith's so-called five pillars and a religious duty for all Muslims that must be carried out at least once in their lifetime if they are capable. It started on Wednesday and ends on Tuesday.

Saudi Arabia has led Arab efforts to isolate President Bashar al-Assad's government and has supported the rebels with money and logistics.

At the protest, dozens of security guards already deployed in the area stood by without interfering.

"Syria lives forever despite of you Assad," the protesters shouted as the streamed by a giant wall at Jamarat Bridge used for the ritual stoning of the devil, one of the main rites of the haj. Another slogan went: "We don't want Bashar, all Syrians raise your arms up!"
The imam of Mecca's Grand Mosque called on Arabs and Muslims on Friday to take "practical and urgent" steps to stop bloodshed in Syria, which has killed some 30,000 people, and urged world states to assume their moral responsibility toward the conflict.

Saudi Arabia has instructed its embassies to issue haj permits for Syrian refugees in Jordan, Lebanon and Turkey, but most of the Syrians who made it to Mecca were those who live in the Gulf Arab region.

Syrian truce collapses, almost 150 killed
Almost 150 people died on the first day of a barely-observed truce between the warring parties in Syria, a watchdog said, adding that a fresh clashes on Saturday claimed more lives.
The Syrian Observatory for Human Rights said of the 146 people killed in bombings, artillery fire and fighting on Friday, 53 were civilians, 50 were rebels and 43 were members of President Bashar al-Assad's forces.

State media blamed "terrorists," the regime term for rebels, for a car bomb attack in Damscus hat killed at least eight people and wounded 30, and a rights watchdog reported another deadly bombing in Daraa.

Rebels accused regime forces of opening up with artillery in the ebbattled north, where the Syrian Observatory for Human Rights reported fighting near the key army base of Wadi Deif and shelling and clashes near Damascus.

Ceasefire violated, 3 killed by snipers, tank fire outside Damascus
Three people were killed by tank fire and snipers in the Damascus suburb of Harasta on Friday, activists said, in another violation of a ceasefire intended to mark the Muslim holiday of Eid al-Adha.
Rebels in a northern town close to the Turkish border also reported one of their fighters was shot dead by a sniper early on Friday and a Reuters journalist in the town heard what sounded like four rounds of tank fire.

Heavy clashes at Syrian army base, violating Eid ceasefire
Heavy fighting broke out around a Syrian military base on Friday, the Syrian Observatory for Human Rights said, in the first major violation of a ceasefire marking the Muslim holiday of Eid al-Adha.

The Observatory said rebel fighters were trying to storm the base, which is less than 1 km (half a mile) from the main north-south highway linking Damascus to Aleppo, and President Bashar al-Assad's forces had fired artillery at a nearby village.
Voice of Russia, TASS, Reuters, AFP