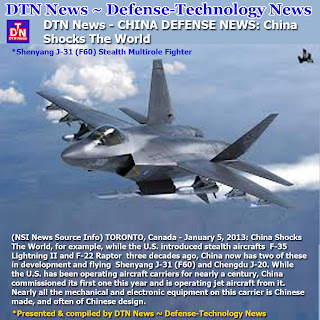 (NSI News Source Info) TORONTO, Canada - January 5, 2013: Chinese weapons development in the last two decades has been even more spectacular when you consider that 500 years ago China began falling farther and farther behind the West in most military matters. When the civil war ended in 1948 there were no Chinese factories producing modern (Western) weapons.

There were some workshops repairing Western weapons and assembling them from parts, but that was it. In the 1950s China began producing licensed copies of simple Russian weapons (rifles, machine-guns, some artillery and ammunition for all this stuff), but nothing sophisticated.

By the late 1950s China was producing copies of Russian tanks and other armored vehicles as well as the two seat trainer version of the MiG-15 jet fighter and the Mig-17 jet fighter.

Many of the components for armored vehicles and aircraft had to be imported from Russia. It took decades for China to develop the skills and industrial organizations that could build the electronics and high-tech mechanical items (like jet engines). This really didn’t start happening until after the economic reforms of the 1980s (allowing entrepreneurs to start businesses and get rich) had time to develop high-tech industries. That’s why there’s been so much progress in the last two decades. China is still playing catch-up, but is closing the gap more rapidly every year. 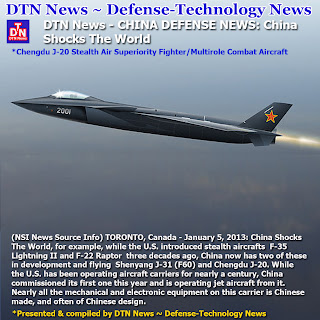 For example, while the U.S. introduced stealth aircraft three decades ago, China now has two of these in development and flying. While the U.S. has been operating aircraft carriers for nearly a century, China commissioned its first one this year and is operating jet aircraft from it. Nearly all the mechanical and electronic equipment on this carrier is Chinese made, and often of Chinese design.

China is a major supplier of satellite launch services and has already developed and tested a KillSat (a satellite that can find and destroy, via collision, another satellite). China has sent men into space in the last decade and is developing a reusable vehicle similar to the American Space Shuttle.

China has been producing more and more UAVs with capabilities (and often designs) similar to the most advanced ones in the West. China is still having problems developing state-of-the-art warships, but keeps at it and continues to make progress. Same trend with missiles (guided, ballistic and so on).