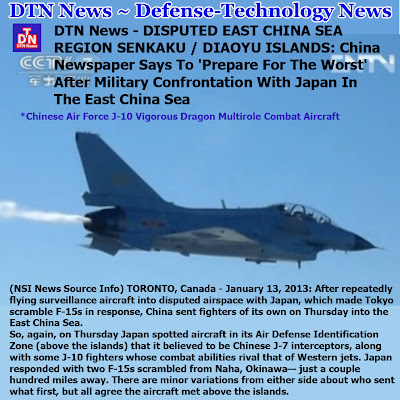 (NSI News Source Info) TORONTO, Canada - January 13, 2013: After repeatedly flying surveillance aircraft into disputed airspace with Japan, which made Tokyo scramble F-15s in response, China sent fighters of its own on Thursday into the East China Sea.

A Friday press release out of China confirms the incident began when Beijing was flying a Shaanxi Y-8 on a "routine Thursday patrol" over the "oil and gas fields in the East China Sea."
The fact that the aircraft was a S haanxi  Y-8 is interesting in that the Y-8 isn't necessarily any one particular aircraft.
The Diplomat calls the Y-8 a transport plane, and it can be, butthe aircraft has more than 30 variants. The Y-8 performs everything from Mineral Research, to Geophysical Surveying, to Electronic Warfare to Intelligence Gathering and one variant is simply an innocuous but lethal fully loaded gunship, with two heavy cannons and three heavy machine guns.
It's the perfect plane for a game of cat and mouse because if the Y-8 ever received fire from Japan's F-15s, China could simply maintain it was an unarmed transport model carrying troops, or the Y8-F model that carries only livestock.
In the meantime, the plane can perform all manner of sophisticated tests on the seabed floor, while eavesdropping on Japanese communications. China has been flying these planes consistently lately to surveil the contested island chain that's supposed to hold billions in oil and gas reserves.
So, again, on Thursday Japan spotted aircraft in its Air Defense Identification Zone (above the islands) that it believed to be Chinese J-7 interceptors, along with some J-10 fighters whose combat abilities rival that of Western jets. Japan responded with two F-15s scrambled from Naha, Okinawa— just a couple hundred miles away. There are minor variations from either side about who sent what first, but all agree the aircraft met above the islands.
The Chinese planes scattered soon after, but this marked the first time China and Japan flung military assets at one another over the East China Sea island dispute. A line was crossed and staying behind it in the future will only be more difficult.
The U.S. assistant Secretary of State for East Asian and Pacific Affairs Kurt Campbell announcedthat he will be traveling to Seoul, and Tokyo. What he decides in Tokyo will filter south to Naha and the Japanese unit confronting the Chinese.
An interesting fact about Naha, aside from its proximity to the contested territory, is that while being fairly remote, it is also home to Alfred R. Magleby, a United States Consul General who holds a M.S. in Strategic Studies from the U.S. Naval War College. This is appropriate, since the Naha Port (formerly Military) Facility is part of U.S. Forces Japan and the U.S. Marine Corps Air Station Futenma is less than nine miles from where Japan's F-15s scrambled.
It looks like the islands everyone's talking about are a few dots in the middle of nowhere, but all of this is taking place close to the U.S. Consulate and a contingent of several thousand U.S. Marines whose former commanding general told Time in 2010: "All of my Marines on Okinawa are willing to die if it is necessary for the security of Japan." 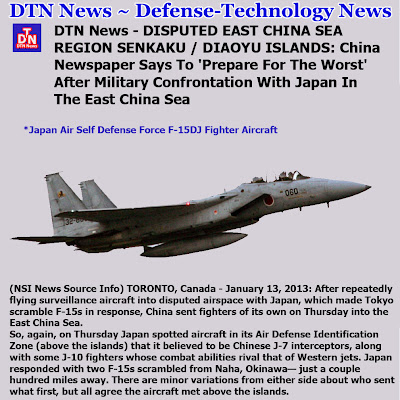 In the future, when responding to China's fighter deployment, if Japan considers permitting its F-15 pilots to fire tracer bullets as warning shots against Chinese planes, it is now reasonable to assume that U.S. forces at Futenma may have an indirect say in that decision.
Firing tracers, which usually contain phosphorous or some highly flammable material, sends a line of light through the air like a laser. Tracers are usually loaded in about every tenth round to let gunners know where they're shooting, but in this case they would be fired to show Chinese pilots they're being fired upon.
An editorial in China's state-run Global Times called this possibility, "a step closer to war," warning a military clash is "more likely" while its people need to prepare "for the worst." With a U.S. presence so close at hand to where these Japanese decisions are being made, and tactical practices employed, we can hope for at least a bit of immediate tempering.
The Chinese jets are likely flying from air base Shuimen, built east of the islands in Fujian Province, not too much farther from the islands than Naha, Okinawa. So both sides have assets equally within reach of the islands.
Satellite imagery of the base  came to light in 2009, and experts believe it was completed late last year.
The Taipei Times reported in May 2012 that J-10 combat aircraft, Su-30 fighters, and various unmanned drones were arriving at the base.
In addition to aircraft, experts believe Russian made S-300 long-range surface-to-air missiles ring the airbase, providing some of the best missile protection in the world. The S-300 is comparable tothe U.S. made Patriot missile recently sent to Turkey for its first line of missile defense against Syria.
The Shuimen airbase compliments China's East Fleet that maintains 35 ships in the region, including its newest warship the Type 054, seven submarines, and eight additional landing craft.
Among the subs are four Kilo-class diesel-electric Russian made submarines capable of the most advanced underwater warfare.
All of this located just 236 miles from the contested islands, which have been in dispute between Japan and China for some time. Han-Yi Shaw writes an interesting history of the dispute, for those interested in more background.
While the U.S. takes no official position on who owns the Islands, it would be expected to honor itsU.S.-Japan security treaty signed in 1960.
Though this is a formal agreement that the U.S. will aid Japan if it comes under attack, there are few who believe the U.S. would risk a full-blown war with China over a few uninhabited islands, regardless of how much oil and gas lies beneath them.
But with a U.S. presence so closely intertwined in these events, and a contingent of Marines standing by, it seems that whatever happens could involve American input — one way or another.


MORE ON THE STORY

The development and acquisition of drones has become crucial to the ever-expanding arms race between China and Japan, as tensions over disputed islands in the East China Sea could soon reach boiling point.

Japan has launched naval drills with the US in spite of heightened tensions with China over a territorial dispute. The exercise was initially planned to simulate an island re-occupation, but was scrapped for naval operations to avoid agitating China.

The Chinese navy is set to begin joint military exercises on Friday in the East China Sea. The exercises will take place on the doorstep of the islands at the heart of the recent tensions between Japan and the mainland.

Treasure islands? Japan-China dispute sparks fears of war as US, Taiwan weigh in

Taiwan recently entered a mounting dispute over islands in the East China Sea by sending dozens of fishing boats to the region. Analysts fear these tiny, uninhabited islands could become the flashpoint for a full-fledged international conflict.

Hundreds of Japanese nationalists have marched through the streets of Tokyo in protest against Chinese foreign policy, as the diplomatic row between the two countries over an archipelago in the East China Sea threatens to spiral out of control.