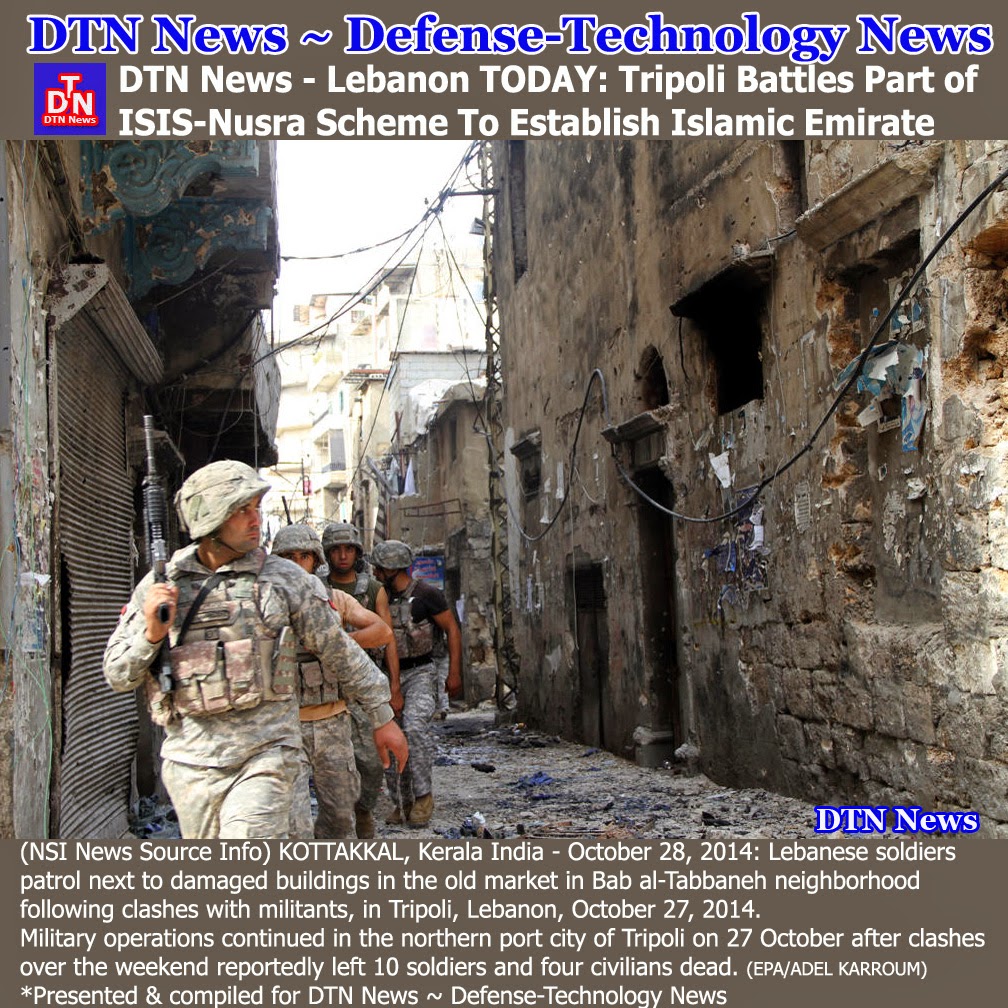 Military operations continued in the northern port city of Tripoli on 27 October after clashes over the weekend reportedly left 10 soldiers and four civilians dead.

Soldiers raided streets in searches for militants in the mainly Sunni neighborhood of Bab al-Tabbaneh, four days after violence first erupted. Shops, businesses and schools remained closed in Lebanon's second-largest city, while most people living near the area of the confrontations have left their homes in fear that the violence will spread.


Four days of fierce fighting between the Lebanese Army and Tripoli’s militants were part of a scheme by ISIS and the Nusra Front to establish a foothold in northern Lebanon, and eventually set up an Islamic emirate in the multi-sectarian country, analysts said Monday. They added that the Army’s determination to crush militants in northern Lebanon, regardless of the sacrifices that entailed in the ongoing battle against homegrown terrorism, has foiled attempts by ISIS and Syria’s Al-Qaeda affiliate Nusra Front to establish an Islamic state in the country.

“The scheme to establish an Islamic emirate in north Lebanon is a long-term objective of militant groups. ISIS and the Nusra Front had prepared this scheme two years ago,” Hisham Jaber, a retired Lebanese Army general and an expert on terrorism, told The Daily Star.

“Destabilizing north Lebanon and awakening sleeper cells to attack the Army are signs of laying the ground for establishing an Islamic emirate,” said Jaber, director of the Middle East Center for Political Studies and Research, a Beirut-based think tank. “The Army is being targeted because it is the only force confronting terrorist groups in the north.”

He added that the establishment of even an “illusory” Islamic emirate is “a very dangerous signal” for Lebanon, long known for its religious tolerance and sectarian diversity.

Fadia Kiwan, head of the political science department at Universite St. Joseph, said she shared fears voiced by Lebanese officials, including Army chief Gen. Jean Kahwagi, that ISIS and the Nusra Front were planning to set up an Islamic emirate in the north.

“In the past, extremist groups threatened to set up an Islamic caliphate or emirate in north Lebanon,” Kiwan told The Daily Star. “Now, part of the ISIS-Nusra Front scheme is to make a breakthrough to reach the sea and secure a safe access to the sea in order to export oil.”

“I have confidence in the Army commander’s statement when he says these groups were planning to establish an Islamic emirate in the north,” she added. “The Daesh [ISIS] phenomenon, which is alien to the Lebanese, has found home among Lebanese militants in the north.”

Speaking at a news conference following clashes between Lebanese troops and ISIS and Nusra Front gunmen in the northeastern town of Arsal on Aug. 2, Kahwagi said confessions by Imad Ahmad Jomaa, the alleged ISIS commander in Syria’s Qalamoun region whose arrest by the Army triggered the fighting, showed that the militants planned to establish an Islamic state between the Bekaa Valley and north Lebanon.

Tripoli was calm Monday after Lebanese commandos, backed by helicopter gunships, captured the stronghold of militant leaders Shadi Mawlawi and Osama Mansour following four days of pitched battles that rocked the predominantly Sunni city, leaving 42 people dead and some 150 wounded. The two militants are reportedly linked to the Nusra Front.

The fighting in Tripoli and the Minyeh district was the worst spillover of Syria’s war into Lebanon since ISIS and Nusra Front gunmen briefly overran Arsal in August.

Both Jaber and Kiwan said the Tripoli militants were part of the regional ISIS-Nusra Front network operating the region with the aim of promoting an Islamic Shariah-based rule in the Arab and Muslim worlds. They also praised the Army’s role in foiling alleged plans to set up an Islamic emirate in the north.

“The Tripoli battle is over but the Army’s war against terrorist groups is not finished at all. This war will drag on for a long time,” Jaber said.

“With its offensive in Tripoli and the Dinnieh region, the Army has thwarted a major terrorist scheme aimed at undermining Lebanon’s security through three bomb-rigged cars, an arms cache and explosives belts and devices discovered by the military [in Minyeh],” he said.

Kiwan said: “The Army has so far succeeded in saving Lebanon from a scheme to set up an Islamic emirate. The Army has proved that it had prepared Plan-A and Plan-B for the battle against terrorism.”

Because the Army’s siege had severed supply routes to ISIS and Nusra Front militants who are holed up in Arsal’s outskirts and are still holding 27 servicemen hostage, Jaber said the gunmen would try to secure safe access to the sea.

“I expect these terrorist groups to try again to break into Arsal or attack villages in northern Bekaa with the aim of finding a logistical outlet to secure food, water, arms and ammunition during the winter,” he said.

However, Imad Salamey, a political science professor at the Lebanese American University, said he did not think ISIS and the Nusra Front were working to establish an Islamic state in north Lebanon for the time being.

“The strategy of all radical political Islamic groups, Sunni or Shiite, calls for the establishment of an Islamic state,” Salamey told The Daily Star. “ISIS and Nusra’s plan for now is to maintain Lebanon as a logistical backup for their operations in Syria, rather than establish an Islamic state.”

Although noting that the Lebanese Army has taken control of Tripoli, Salamey said: “The Tripoli battles definitely will breed more extremism, setting the stage for new rounds of fighting in the future.” He said the threat of renewed fighting in Tripoli will persist “unless there is a comprehensive solution under which the Lebanese government applies the law equally among all its citizens and the state is the sole authority politically and militarily on its own territory.”

Salamey said he expected Lebanon to continue to suffer from the fallout of turmoil in the region. “The regional environment is unstable. So it is difficult for Lebanon to be stable. Lebanon needs to take any possible measures to prevent a spillover of external conflicts,” he said.

In addition to strengthening and reasserting government authority across the country, Salamey said Lebanon needs to maintain “neutrality” on regional conflicts and comply with the Baabda Declaration.

Asked about whether the Tripoli militants were part of the regional ISIS-Nusra network, he said: “Some of them might be part of this network, but others are local residents who do not like what they see as the Lebanese Army’s ‘aggressive role’ against the Sunnis. These people reflect long-standing Sunni grievances.” 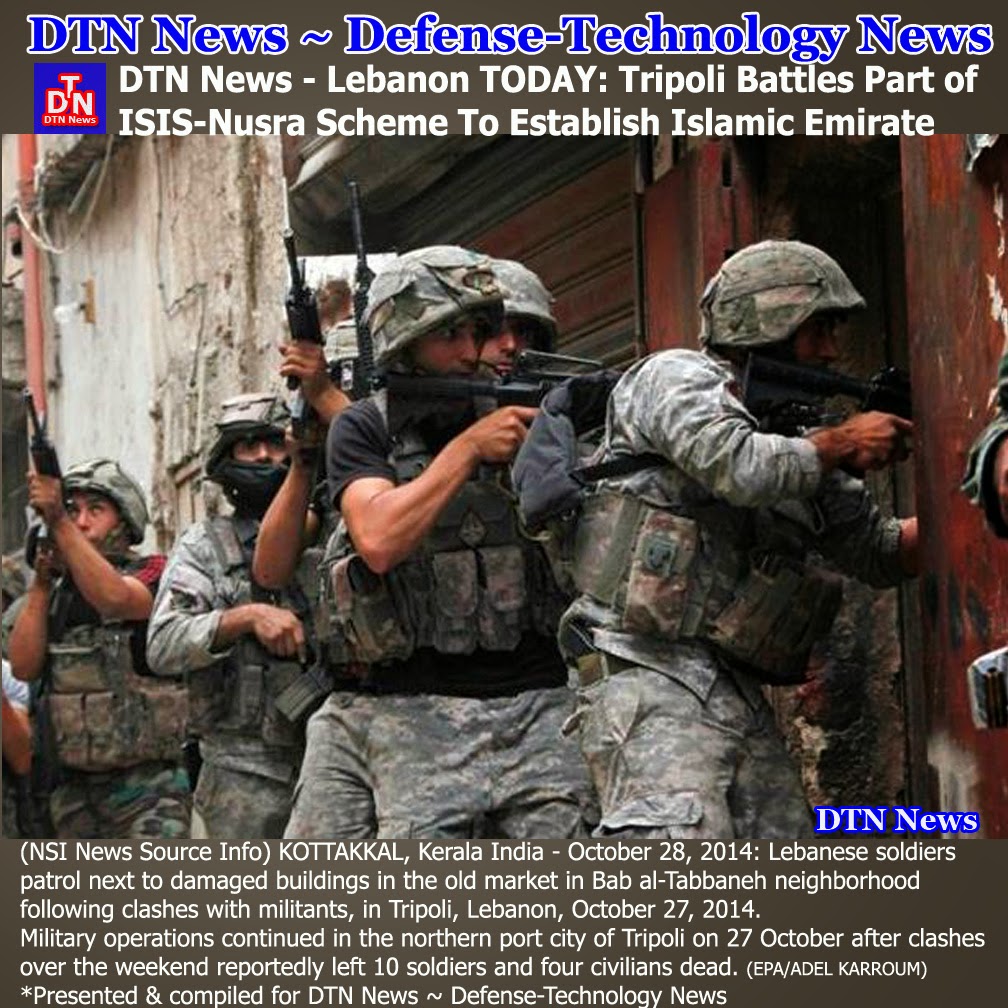 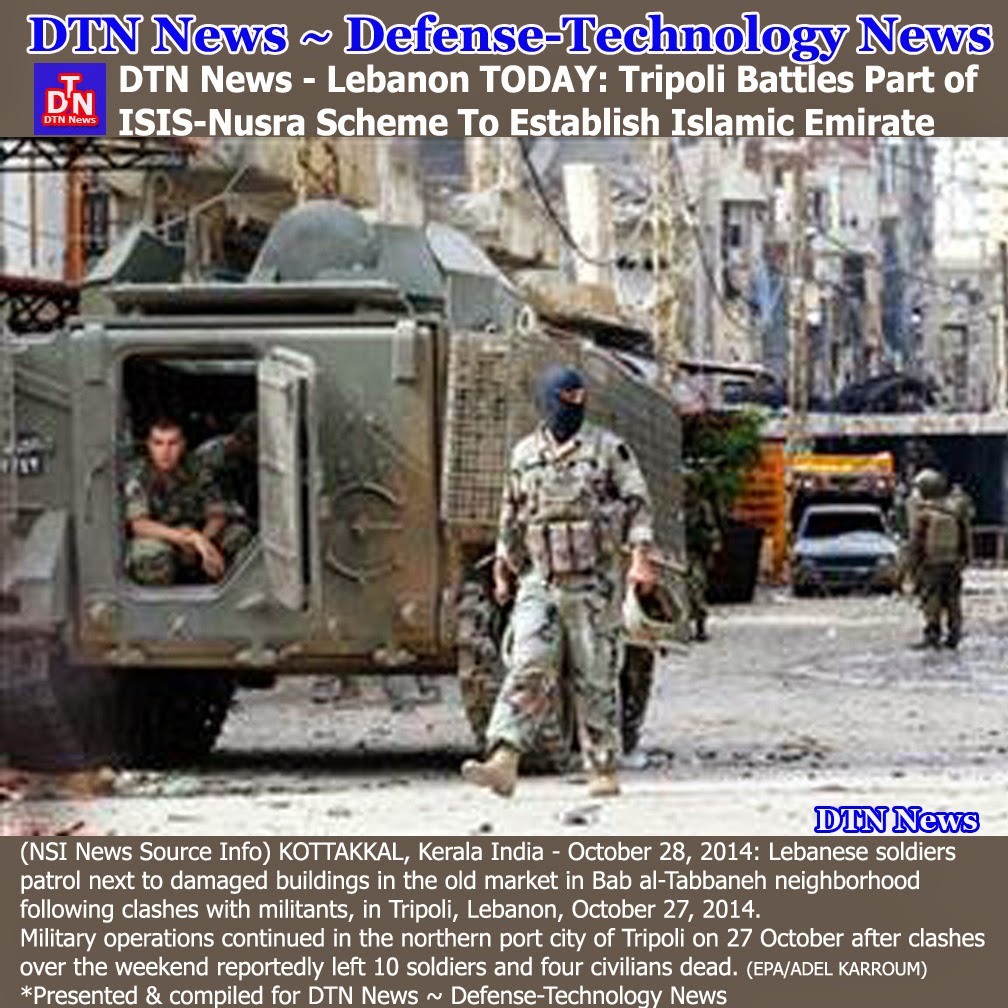 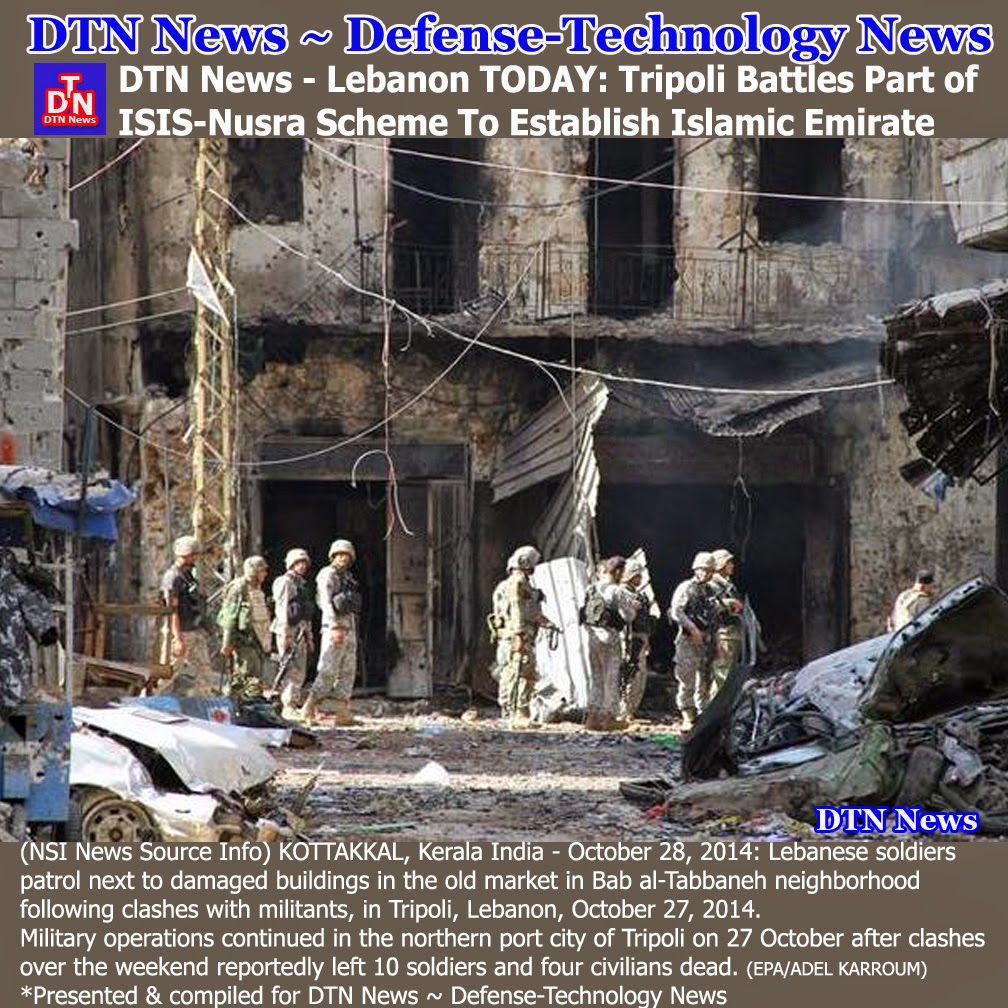 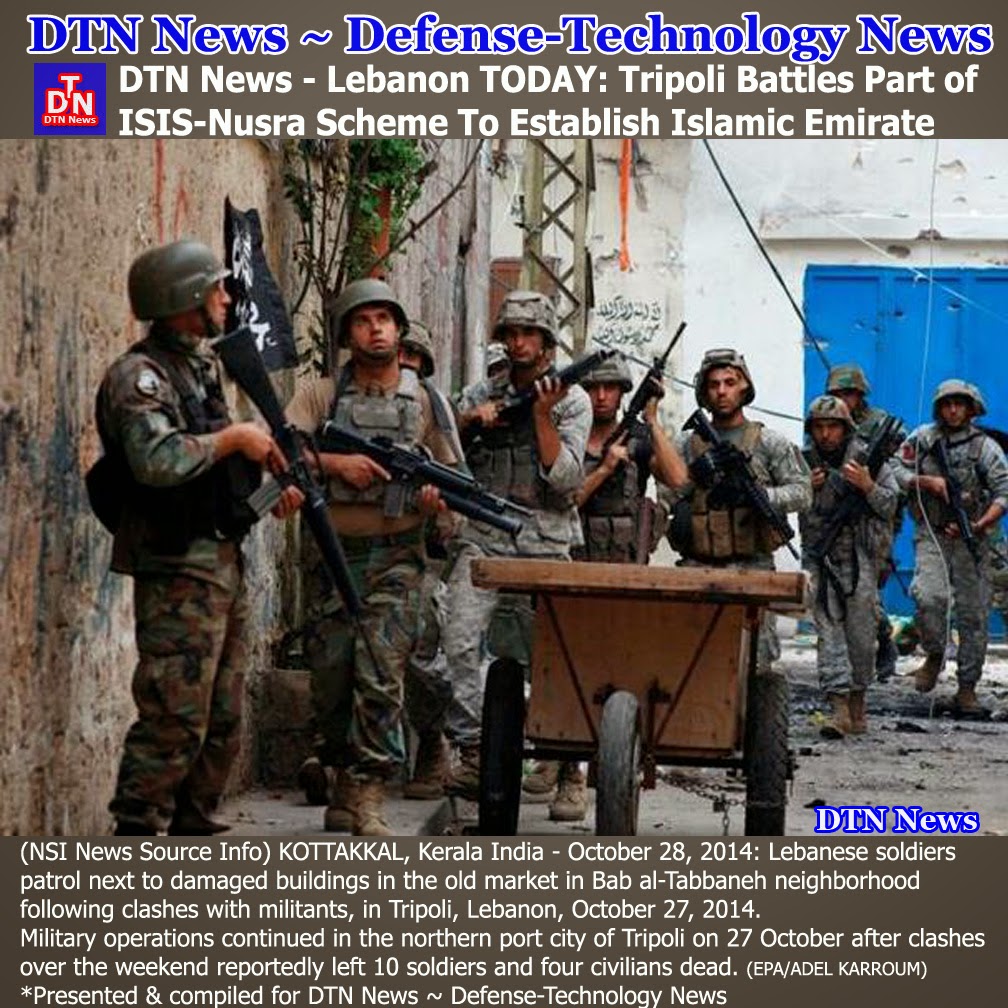