Source: DTN News - - This article compiled by Roger Smith from reliable sources The Telegraph
(NSI News Source Info) TORONTO, Canada - December 11, 2010: Violence in north, south and east Afghanistan killed more than a dozen civilians and wounded several more as US President Barack Obama prepares to unveil a review of his strategy for the near decade-long war. 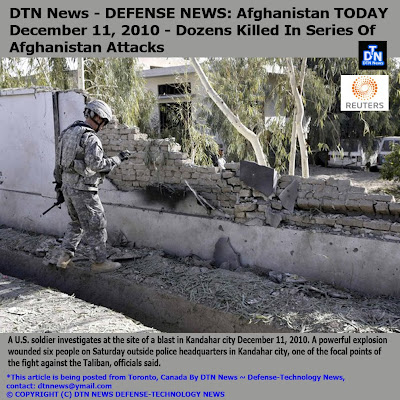 The latest string of attacks comes near the end of the deadliest year since the 2001 overthrow of the Taliban, with the escalating insurgency costing the lives of a record number of both ordinary Afghans and foreign troops.

In the east, seven men died in a disputed air strike that sent hundreds pouring onto the streets of Gardez city in violent protest.

ISAF said they were attacked by armed men, and fired back.

"The security force ... is currently assessing who the individuals were, why they were armed and why they were in that area at that time of the morning," said ISAF in a statement.

In Gardez, near the air strike, police and protesters fired at each other and burning tyre barricades filled the streets with smoke.

Despite the presence of about 150,000 foreign troops, casualties have risen rapidly this year.

According to UN figures, 1,271 civilians were killed in the first six months of this year, up by a fifth on the same period in 2009.

Mr Obama is expected to unveil a review of his Afghanistan war strategy next week, although officials have said they do not expect it to result in any major policy shifts.