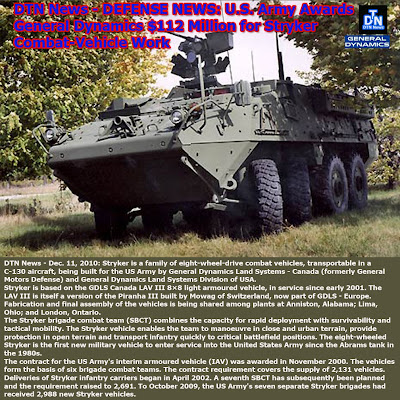 “The Stryker is called ‘the backbone’ of the Army’s medium armored brigades and with these contracts, we will continue to strengthen the vehicle so it can protect our troops in theatre,” said Mike Cannon, senior vice president of General Dynamics Land Systems’ Ground Combat Systems. “Stryker delivers strength, speed, lethality and survivability where it counts.”

Under one contract for $92 million from the U.S. Army TACOM Life Cycle Management Command, General Dynamics will provide design and integration engineering services, prototypes, procurement of materials and components and an integrated solution that will deliver improved blast-protection levels to support Stryker brigades.

The second contract, worth $11.7 million, is to acquire the production cut-in for alternators and air conditioning for Stryker Mobile Gun System (MGS) vehicles. The MGS variant is a direct-fire infantry assault platform with a 105mm tank cannon mounted in a low-profile, fully stabilized, “shoot-on-the-move” turret to support dismounted infantry. It destroys vehicles, equipment and hardened positions with its bunker- and wall-breaching capability. It is also equipped to detect nuclear, biological and chemical weapons. Work on the contract is expected to by February 2011.

The third contract awarded is valued at $8.5 million and funds equipment and components in support of total package fielding of Stryker vehicles. Work on the contract is expected be completed by September 2011.

Work on these contracts will be performed in Sterling Heights, Mich. and London, Ontario, Canada by existing General Dynamics employees.