Source: DTN News - - This article compiled by Roger Smith from reliable sources By Kathrin Hille in Beijing - FT.com
(NSI News Source Info) TORONTO, Canada - December 18, 2010: China has confirmed for the first time that it is preparing to build an aircraft carrier, a move set to heighten international concerns over the rapid expansion of its naval power.

Beijing announced its step quietly with one sentence buried at the end of a lengthy government publication. 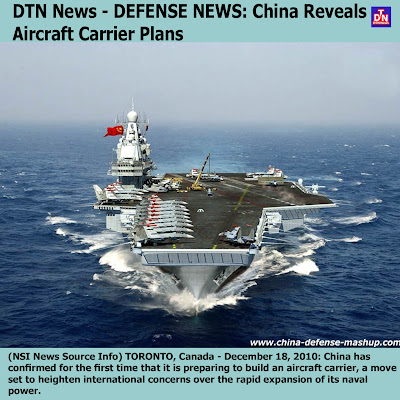 “In 2009, China put forward a plan and a programme for building an aircraft carrier,” says China’s Ocean Development Report (2010), a book published in May by the State Oceanic Administration, a body under the Ministry of Land and Resources.

“This shows that China has started entering a new historic era of comprehensively building itself into a great naval power. [This] is China’s historic task for the entire 21st century,” the report said.

A senior Chinese defence official told the Financial Times two years ago that the world should not be surprised if China built an aircraft carrier. In March last year, Liang Guanglie, China’s minister of defence, told his Japanese counterpart that China would not remain forever the only major power without an aircraft carrier.

Defence experts have also spotted, from Google Earth imagery, the construction of runways at two military airports over the past year suitable for training pilots in take-off and landing under aircraft carrier conditions.

The Varyag, a Soviet-era aircraft carrier hull that China bought from Ukraine in 1998, has been undergoing repairs and is expected to start service as an exercise platform in 2012.

Although all this had been known, the confirmation is likely to create a stir as anxiety is building among China’s neighbours about its growing assertiveness.

“An aircraft carrier symbolises the ambition to move far beyond your own shores. It is a tool for power projection,” said a defence attache of an Asian country in Beijing. “China’s navy is still a dwarf compared with the US, but this makes it official that they will be rivals.”

The reference to the carrier programme was reported by Japanese newspaper Asahi Shimbun just as Japan ordered its military to refocus on the threat posed by a rising China.

The revelation is inconvenient for China as it is trying to repair some of the damage made by assertive moves and aggressive rhetoric from defence officials.

Beijing has recently silenced several military officers who had raised hackles earlier this year with belligerent comments. It has also deliberately tried to take its navy out of the limelight.

It has also resumed military-to-military dialogue with the US to prepare for a visit by Robert Gates, defence secretary, and a visit by Hu Jintao, president, to Washington next month.

The US navy complained last year that its vessels had been harassed by Chinese ships in international waters. China has also clashed at sea in disputed waters with vessels from Vietnam, Malaysia and Japan at an increasing frequency.

In addition, the Chinese navy has expanded the scope and scale of naval exercises, and invested heavily in modernizing its fleet.

Admiral Mike Mullen, chairman of the US joint chiefs of staff, said earlier this year he had “gone from being curious about where China is headed to being concerned about it”.