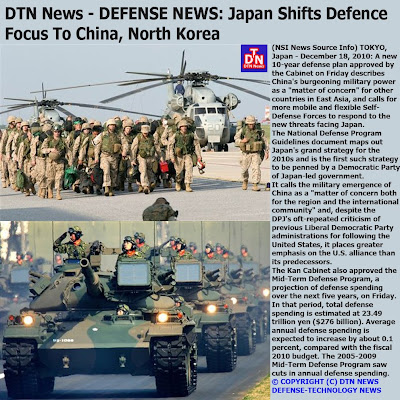 The National Defense Program Guidelines document maps out Japan's grand strategy for the 2010s and is the first such strategy to be penned by a Democratic Party of Japan-led government.

It calls the military emergence of China as a "matter of concern both for the region and the international community" and, despite the DPJ's oft-repeated criticism of previous Liberal Democratic Party administrations for following the United States, it places greater emphasis on the U.S. alliance than its predecessors.

The Kan Cabinet also approved the Mid-Term Defense Program, a projection of defense spending over the next five years, on Friday.

The new strategy emphasizes "dynamic defense capabilities" that stress mobility and rapid response by the Self-Defense Forces. It also calls for strengthening of the defense of the Nansei island chain that lies off the south of Kyushu and extends to close to Taiwan. Both are clear reflections of concerns about China's emerging military presence in the region. The disputed Senkaku Islands, which were the focus of a spat with China in September, are in the Nansei region.

The guidelines propose increasing the deployment of submarines in the area and the use of surveillance units to keep an eye on shipping in the area.

In April, a total of 10 Chinese naval vessels moved through waters that separate the main Okinawa island from Miyakojima island as part of a maritime military exercise that extended from the East China Sea to the Pacific Ocean. A Maritime SDF destroyer monitored the exercise from a distance of 4,000 to 5,000 meters.

Ship-based helicopters on two occasions veered dangerously close to the destroyer. On one occasion, a helicopter hovered about 90 meters horizontally and at a height of 30 meters.

After that incident, the governments of Japan and China resumed discussions to establish a maritime communications system to avoid accidents between the MSDF and the Chinese navy in the East China Sea.

However, one high-ranking Defense Ministry official expressed doubts that an agreement can be reached.

China's increasing assertiveness is also the primary reason the guidelines call for a comprehensive review of the "Basic Defense Force Concept," which long served as the cornerstone of Japan's defense policy.

A key element of that concept was an even and uniform deployment of the SDF across Japan's territory, but the shift to the south of Japan's defense focus and the emphasis on rapid deployment may force a rethink.

The guidelines talk about units being deployed away from their assigned bases to respond to terrorists and to defend outlying islands. These passages appear to be referring not only to North Korea, which continues with nuclear weapon and ballistic missile development, but also Beijing, which has rapidly expanded its activities in the East China Sea and South China Sea.

The focus on China partly reflects the policy of the United States. In the Quadrennial Defense Review (QDR) released by the U.S. Defense Department in February, concerns were raised about how China's increasing military capabilities were threatening the projection of U.S. power in the western Pacific.

The United States could be prevented from operating in the region if China's submarines expanded their activities in the Pacific or if China developed anti-ship ballistic missiles that could hit aircraft carriers.

But the guidelines also state that the influence of the United States is changing relative to the growing power of nations such as China, India and Russia, and indicate that Japan will have to shoulder more of a defense burden.

The guidelines also call for greater cooperation with Australia and South Korea, two other American allies.

The new strategy does not, however, deliver the review of Japan's ban of weapons exports for which Washington has long been asking.

The guidelines do state that a major trend among advanced nations is international joint development and production of weapons because of the higher costs and functions of the most advanced weapons, and call for discussion about how to respond to the trends. But there is no attempt to reverse the ban.

A statement was released under the name of Chief Cabinet Secretary Yoshito Sengoku Friday saying that the government would continue to abide by the three principles on weapons exports.

The statement also called for the compilation of a medium- and long-term strategy to maintain and bolster defense production and technology.

China on Friday blasted Japan for singling out Beijing in its new defense guidelines and raising concerns about its emerging military presence.

Chinese Foreign Ministry spokeswoman Jiang Yu said in a statement, "An individual nation has no right to make irresponsible statements about China's development, acting as though it represents the international community."

There has been strong interest in China about the new defense guidelines, with one Chinese expert on Japan urging caution against worsening friction between the two nations.

Jiang added, "China's national defense policy is for defensive purposes only, and China has no intention of becoming a threat to anyone."

- North Korea's military movements are a major element of instability. The modernization of China's military power and strengthening of its capabilities are matters of concern for the region and the international community.

- Highly mobile forces capable of rapid deployment should be developed.

- Cold War-era weapons and personnel deployments should be phased out. Surveillance, maritime patrol, air defense and ballistic missile defense capabilities should be improved.

- Units should be deployed to outlying islands where there is now no presence.

- Defenses against cyber attacks should be strengthened

- Measures to avoid friction due to U.S. military bases in Japan should be introduced.

- Japan should debate how to deal with the trend toward the multinational development and production of weapons.

Japan needs to focus on the rise of China and not the Cold War threat of Russia in defining its security goals, according to new defense guidelines announced Friday.

The guidelines, which were approved by the Cabinet, also call for a stronger alliance with the U.S. - Japan's biggest ally - and expanded security networks with regional partners, including South Korea and Australia.

China immediately slammed the guidelines as "irresponsible." Foreign Ministry spokeswoman Jiang Yu said China is a force for peace and development in Asia and threatens no one.

To bolster its forces, Japan will acquire new submarines and fighter jets, upgrade its missile defense capabilities and make its ground forces more mobile so that they can quickly respond to emergencies in southwest Japan.

The guidelines paint China as a bigger threat than Russia and say Japan is shifting its defense emphasis from the northern island of Hokkaido to islands in the south, such as Okinawa and territories claimed by both Tokyo and Beijing that have recently led to diplomatic tensions.

The Japan-U.S. alliance remains "indispensable" to Japan's security, the guideline said, calling for stronger cooperation between Japanese and the 47,000 U.S. armed forces based in this country. It also urged Japan to use its diplomatic and defense capabilities "more proactively."

But the guidelines cited "changes in global power balance" and noted a relative decline of America's strength and rise of emerging countries such as China and India. Japan, meanwhile, should pursue its own efforts to enhance missile defense capabilities to protect itself from threats by China and North Korea, it said.

"We still have lots of tanks and Ground Self-Defense Forces on Hokkaido and we need to shift to the southwestern islands," a senior government official said on condition of anonymity before the official release of the guidelines. The official said the goal is to "modernize our defense posture from our Cold War days."

The guidelines said China's rapid military buildup and lack of transparency are matters of concern. It said North Korea's military activity is a "pressing and serious destabilizing factor" for Japan and causes grave problems for international nonproliferation efforts.

"The Korean Peninsula and North Korea are imminent and concrete threats to Japan, while China is more of a medium-term threat ... It is a major risk factor for Japan's security in the southwestern islands and the Japan-U.S. security alliance in the long run," said Hideshi Takesada, executive director at the National Institute for Defense Studies. "The guideline addresses such concerns and developments in the region."

In Beijing, officials said Tokyo was wrong in seeing China as a threat. "Individual countries have no right to represent the international community and make irresponsible remarks on China's development," Foreign Ministry spokeswoman Jiang said.

China insists on following the "road of peaceful development" and upholds a military policy that is entirely defensive in nature, she said. Relations between Tokyo and Beijing deteriorated quickly over a longstanding dispute over islands in the East China Sea called Diaoyu in China and Senkaku in Japan after a Sept. 7 collision between a Chinese fishing boat and Japanese coast guard vessels, an incident that has raised public and government concern over China's military strength.

Washington has urged Japan to play a greater security role in the region, and proposed a three-way military alliance that would include South Korea. Regarding specific deployments, Japan plans to send more ground troops to its southwestern islands. The troops will use mobile radar and fly reconnaissance aircraft to monitor the surrounding seas, according to a separate five-year defense plan through March, 2015, also approved Friday by the Cabinet.

The plan did not specify the location but Japanese media have said 100 ground troops will be sent to Yonaguni, in Okinawa prefecture, where Japan currently has no troops. Placing them on the island that is closer to China, Taiwan and the disputed islands could be contentious.

Japan will also increase its submarines to 22 from the current 16 and add a destroyer, bringing the total fleet to 48, including six Aegis radar-equipped warships. Tanks will be reduced to 400 from 600 but the number of ground forces maintained at roughly the current level of 150,000.

The guideline also proposed joining in international arms development or production to bolster the defense industry, which is largely limited to the domestic market.