Source: DTN News - - This article compiled by Roger Smith from reliable sources The South African Air Force
(NSI News Source Info) TORONTO, Canada - December 14, 2010: An agreement to conclude the deal was recently signed by the CEO of Denel Aviation, Mike Kgobe in the capital city of Ecuador, Quito.
Denel Aviation has confirmed that the total contract value of the 12 Cheetah fighter aircraft sold to Ecuador is expected to be $78.4 million. 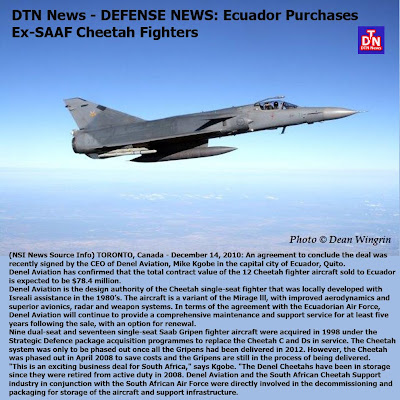 Denel Aviation is the design authority of the Cheetah single-seat fighter that was locally developed with Isreali assistance in the 1980’s. The aircraft is a variant of the Mirage lll, with improved aerodynamics and superior avionics, radar and weapon systems. In terms of the agreement with the Ecuadorian Air Force, Denel Aviation will continue to provide a comprehensive maintenance and support service for at least five years following the sale, with an option for renewal.

Nine dual-seat and seventeen single-seat Saab Gripen fighter aircraft were acquired in 1998 under the Strategic Defence package acquisition programmes to replace the Cheetah C and Ds in service. The Cheetah system was only to be phased out once all the Gripens had been delivered in 2012. However, the Cheetah was phased out in April 2008 to save costs and the Gripens are still in the process of being delivered.

"This is an exciting business deal for South Africa," says Kgobe. "The Denel Cheetahs have been in storage since they were retired from active duty in 2008. Denel Aviation and the South African Cheetah Support industry in conjunction with the South African Air Force were directly involved in the decommissioning and packaging for storage of the aircraft and support infrastructure.

Kgobe stated that Denel’s offer met the needs of the Ecuadorian Air Force (FAE) that was looking to modernise its fighter fleet. Negotiations between Denel Aviation, Armscor and the FAE have been continuing since 2009. A FAE team visited South Africa in April this year to inspect the Cheetah fleet and to witness specific evaluation flights. The aircraft have been made available for sale through Armscor, the state agency responsible for the sale of surplus military products and equipment.

Complete maintenance and acceptance flight testing will be conducted in South Africa and in Ecuador, now that the deal has been finalised. Denel Aviation earlier visited FAE facilities to review the infrastructure and technical capability of the Ecuadorian Air Force to accommodate the Cheetah aircraft to evaluate the level of support required and to identify the need for further training.

"This is a huge breakthrough for Denel Aviation and it will open up a number of new opportunities for Denel and other players in the local industry involved in Cheetah support," says Mr Kgobe.