DTN News - SPECIAL REPORT: DTN News Pays Tribute To US Diplomat Richard Holbrooke As He Was Larger Than life In His Deeds Making The World A Peaceful

DTN News - SPECIAL REPORT: DTN News Pays Tribute To US Diplomat Richard Holbrooke As He Was Larger Than life In His Deeds Making The World A Peaceful Planet

Source: DTN News - - by K. V. Seth from reliable sources
(NSI News Source Info) WASHINGTON - December 14, 2010: Few U.S. diplomats had the breadth, depth or length of service of Richard Holbrooke, who wrote part of the Pentagon Papers, was the architect of the 1995 Bosnia peace accords and served as President Barack Obama's special envoy to Pakistan and Afghanistan. 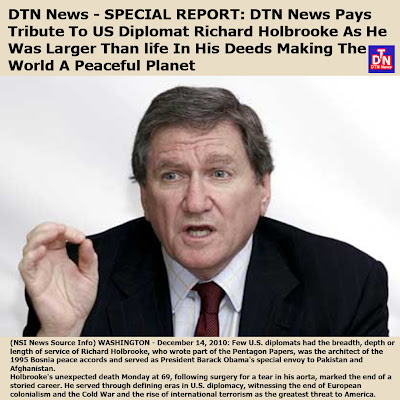 Holbrooke's unexpected death Monday at 69, following surgery for a tear in his aorta, marked the end of a storied career. He served through defining eras in U.S. diplomacy, witnessing the end of European colonialism and the Cold War and the rise of international terrorism as the greatest threat to America.

[ For complete coverage of politics and policy, go to Yahoo! Politics ]

Calling Holbrooke "a true giant of American foreign policy," Obama paid homage to his crisis expert as "a truly unique figure who will be remembered for his tireless diplomacy, love of country and pursuit of peace." Holbrooke deserves credit for much of the hard-won progress in Afghanistan and Pakistan, the president said.

Adm. Mike Mullen, chairman of the Joint Chiefs of Staff, said Holbrooke's presence would be especially missed this week as the Obama administration finishes its review of the Afghan war, expected Thursday. Mullen said Holbrooke helped write and "deeply believed in" the war strategy.

"That we have been making steady progress in this war is due in no small measure to Richard's tireless efforts and dedication," Mullen said. "I know he would want our work to continue unabated. And I know we will all feel his bully presence in the room as we do so."

Holbrooke served under every Democratic president since John F. Kennedy. He brought a lion's appetite for difficult work, from Indochina and the Pacific to Europe, Africa and, in his last incarnation, South Asia.

Supremely self-confident, brash and instantly dismissive of critics, Holbrooke entered the foreign service in the early 1960s at the height of what critics called the State Department's "pale, male and Yale" phase.

It was a time when the dictum of former Secretary of State Henry Stimson — "Gentlemen don't read each other's mail" — still rang through the corridors of Foggy Bottom, the State Department's Washington neighborhood.

At the time of his death, Holbrooke — an Ivy League graduate of Brown University, not Yale — was serving a vastly different agency. The State Department in recent years has been led by an African-American man and three women, one of them African-American.

And, quite far from Stimson's admonition, the department instructed its diplomats to seek out personal information about foreign leaders and politicians, according to leaked classified documents released by the WikiLeaks website.

Holbrooke had a forceful style that earned him nicknames such as "The Bulldozer" and "Raging Bull."

His career began with a posting in Vietnam in 1962 and included time as a member of the U.S. delegation to the Paris Peace Talks on Vietnam.

His sizable ego, tenacity and willingness to push hard for results won him both admiration and animosity.

"If Richard calls you and asks you for something, just say yes," former Secretary of State Henry Kissinger once said. "If you say no, you'll eventually get to yes, but the journey will be very painful."

The bearish Holbrooke said he had no qualms about "negotiating with people who do immoral things."

"If you can prevent the deaths of people still alive, you're not doing a disservice to those already killed by trying to do so," he said in 1999.

Born in New York City on April 24, 1941, Richard Charles Albert Holbrooke had an interest in public service from early on. He was good friends in high school with a son of Dean Rusk and he grew close to the family of the man who would become secretary of state for Presidents John Kennedy and Lyndon Johnson.

At the Johnson White House, he wrote one volume of the Pentagon Papers, an internal government study of U.S. involvement in Vietnam that was completed in 1967.

The study, leaked in 1971 by a former Defense Department aide, had many damaging revelations, including a memo that stated the reason for fighting in Vietnam was based far more on preserving U.S. prestige than preventing communism or helping the Vietnamese.

After stints in and out of government — including as Peace Corps director in Morocco, editing positions at Foreign Policy and Newsweek magazines and adviser to Jimmy Carter's presidential campaign, Holbrooke became assistant secretary of state for Asian affairs from 1977-81. He then shifted back to private life — and the financial world, at Lehman Brothers.

A lifelong Democrat, he returned to public service when Bill Clinton took the White House in 1993. Holbrooke was U.S. ambassador to Germany from 1993 to 1994 and then assistant secretary of state for European affairs.

"He could always be counted on for his imagination, dedication and forcefulness," Clinton-era Secretary of State Madeleine Albright said Monday.

One of his signature achievements was brokering the Dayton Peace Accords that ended the war in Bosnia.

Holbrooke's efforts would later lead to controversy when wartime Bosnian Serb leader Radovan Karadzic told a war crimes tribunal in 2009 that Holbrooke had promised him immunity in return for leaving politics. Holbrooke denied it.

Holbrooke left the State Department in 1996 to take a Wall Street job with Credit Suisse First Boston, but was never far from the diplomatic fray, serving as a private citizen as a special envoy to Cyprus and then the Balkans.

In 1998, he negotiated an agreement with Yugoslav President Slobodan Milosevic to withdraw Yugoslav forces from Kosovo, where they were accused of conducting an ethnic cleansing campaign.

"I make no apologies for negotiating with Milosevic and even worse people, provided one doesn't lose one's point of view," he said later.

When the deal fell apart, Holbrooke went to Belgrade to deliver the final ultimatum to Milosevic to leave Kosovo or face NATO airstrikes, which ultimately rained down on the capital.

Holbrooke returned to public service in 1999, becoming U.S. ambassador to the United Nations.

With his long-standing ties to Bill Clinton and Hillary Rodham Clinton, Holbrooke was a strong supporter of her 2008 bid for the White House. He had been considered a favorite to become secretary of state if she had won.

"Richard Holbrooke saved lives, secured peace and restored hope for countless people around the world," Bill Clinton said in a statement. Hillary Clinton called him one of America's "fiercest champions and most dedicated public servants."

When her presidential campaign ran out of steam, Holbrooke began reaching out to Obama.

Reflecting on his role as Obama's special envoy, Holbrooke wrote in The Washington Post in March 2008 that "the conflict in Afghanistan will be far more costly and much, much longer than Americans realize. This war, already in its seventh year, will eventually become the longest in American history, surpassing even Vietnam."

Gen. David H. Petraeus, commander of U.S. and NATO forces in Afghanistan, called Holbrooke "our diplomatic wingman" and said he was "a great American and a good friend."

Afghan President Hamid Karzai called Holbrooke's death "a big loss for the American people." In neighboring Pakistan, President Asif Ali Zardari said: "His services will be long remembered. The best tribute to him is to reiterate our resolve to root out extremism and usher in peace."

Holbrooke is survived by his wife, author Kati Marton, and two sons from a previous marriage, David Holbrooke and Anthony Holbrooke.