The new fleet was ordered under a USD 1.2 billion US Foreign Military Sale (India’s first) in late 2008. 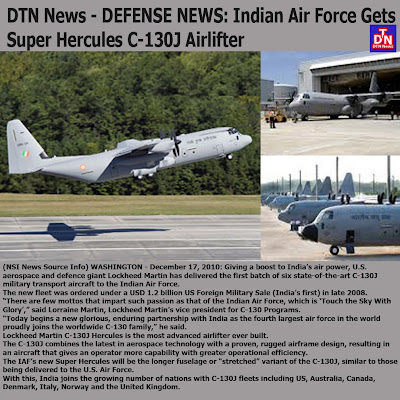 “There are few mottos that impart such passion as that of the Indian Air Force, which is ‘Touch the Sky With Glory’,” said Lorraine Martin, Lockheed Martin’s vice president for C-130 Programs.

“Today begins a new glorious, enduring partnership with India as the fourth largest air force in the world proudly joins the worldwide C-130 family,” he said.

Lockheed Martin C-130J Hercules is the most advanced airlifter ever built.

The C-130J combines the latest in aerospace technology with a proven, rugged airframe design, resulting in an aircraft that gives an operator more capability with greater operational efficiency.

The IAF’s new Super Hercules will be the longer fuselage or “stretched” variant of the C-130J, similar to those being delivered to the U.S. Air Force.

With this, India joins the growing number of nations with C-130J fleets including US, Australia, Canada, Denmark, Italy, Norway and the United Kingdom.

Equipped with an Infrared Detection Set (IDS), the aircraft will be able to perform precision low-level flying, airdrops, and landing in blackout conditions.

Self protection systems and other features are included to ensure aircraft survivability in hostile air defence environments.

In addition, the aircraft is equipped with air-to-air receiver refuelling capability for extended range operations.

Lockheed Martin will integrate this equipment and other capabilities into the Indian configuration as agreed between the governments.

The aircraft is being provided to the U.S. under a package which includes six aircraft, training of aircrew and maintenance technicians, spares, ground support and test equipment, servicing carts, forklifts, loading vehicles, cargo pallets, and a team of technical specialists who will be based in India during a three year initial support period.

In addition, the C-130J Super Hercules will provide the Indian Air Force with modern and effective airlift to support a wide range of national requirements.

The C-130J takes full advantage of the Global Positioning System and other highly reliable, automated navigation and route planning aides.

This allows the cockpit crew to focus on the mission and on flying rather than on managing aircraft systems.

*This article is being posted from Toronto, Canada By DTN News ~ Defense-Technology News, contact: dtnnews@ymail.com
(Ref: Wikipedia....Indian Air Force)
The Indian Air Force, often abbreviated as the IAF with over 1,300 aircraft is the world's fourth largest air force after the United States Air Force,Russian Air Force and China's People's Liberation Army Air Force. The Indian Air Force has aircraft of British, French and Russian (erstwhile Soviet) origins. However, Russian aircraft dominate its inventory. HAL produces some of the Russian and British aircraft in India under license. The exact number of aircraft in service with the Indian Air Force cannot be determined with precision from open sources. Various reliable sources provide notably divergent estimates for a variety of high-visibility aircraft. The IAF currently operates approximately 364 fighter aircraft, over 224 ground-attack/bomber aircraft, 740 non-combat aircraft as well as approximately 135 UAVs. The following is a list of aircraft that have served in or are in service with the IAF, for aircraft programmes still under development refer to Future of the Indian Air Force.