In comments likely to cause a storm in India, Gandhi, who is considered a likely prime ministerial candidate, warned Timothy Roemer that though "there was evidence of some support for [Islamist group Lashkar-e-Taiba] among certain elements in India's indigenous Muslim community, the bigger threat may be the growth of radicalised Hindu groups, which create religious tensions and political confrontations with the Muslim community". 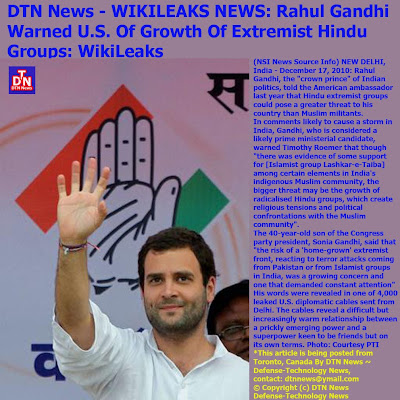 The 40-year-old son of the Congress party president, Sonia Gandhi, said that "the risk of a 'home-grown' extremist front, reacting to terror attacks coming from Pakistan or from Islamist groups in India, was a growing concern and one that demanded constant attention".

His words were revealed in one of 4,000 leaked U.S. diplomatic cables sent from Delhi. The cables reveal a difficult but increasingly warm relationship between a prickly emerging power and a superpower keen to be friends but on its own terms.

The Americans are keen to find allies in the "raucous democracy" of India, and appear to believe Rahul Gandhi could be one. Though earlier dispatches were sceptical of his prospects, Mr. Roemer recently told Washington "the rising profile of young leaders like Rahul Gandhi provides us an opening to expand the constituency in support of the strategic partnership".

In the cables, U.S. diplomats complain of bureaucratic inertia, a lack of capacity, oversensitivity, corrupt or populist politicians and a bureaucracy stuck in the era of the cold war. However, they appear to recognise that a respectful and conciliatory approach to the booming and increasingly self-confident India pays dividends. Despite worries about torture, corruption and deep social problems, US diplomats still see the country as a natural ally.

Their view of Indian politicians is variable, however. The failure of Sonia Gandhi, who chairs the ruling United Progressive Alliance coalition, to overcome opposition to a nuclear power agreement is criticised heavily.

A deal would see, the U.S. diplomats said, a big boost for clean energy in India and a market worth $150bn for American companies. "Mrs Gandhi never misses an opportunity to miss an opportunity," one cable sent in November 2007 said.

Public anger after the terrorist attacks on Mumbai in November 2008 had allowed "people to vent other long-simmering grievances against government - its corruption, its pompous use of symbols of authority like security guards and vehicle sirens, its indifference to providing health and education services", a cable sent in December 2008 said.

Indian officials repeatedly protest that America is too soft on Pakistan and make demands for Washington to insist on Islamabad, or the Pakistani army, shutting down Lashkar e-Taiba. "If you want to end malaria you have to get rid of the swamp," the Indian national security adviser told the FBI director last year. Another recurrent topic is the Indian fear of a U.S. withdrawal from Afghanistan allowing a "fanatical" regime influenced by Pakistan to take over.

In the face of pressure from American diplomats to encourage democracy in Burma, Indian officials are frank. One, in 2004, is reported as saying that Aung San Suu Kyi's "day has come and gone" adding that the UN has little credibility and the EU is too "obvious, shabby, shortsighted ... to play a meaningful role in the country".

On Iran too, there are tensions. In May 2008 India's then foreign secretary, Shiv Shankar Menon, met the U.S. ambassador after a stopover in India by the Iranian president, Mahmoud Ahmadinejad. Mr. Menon did not like Ahmadinejad's "self-congratulatory, self-referential" style, but cautioned that "this government has to be seen following an independent foreign policy, not responding to dictation from the U.S.". Another cable describes Indians as "loth to admit publicly that India and the US have begun co-ordinating foreign policies". Mr. Menon told one top visiting US official that there was no "big idea" to energise Indo-American relations.

The relationship between India and the U.S. appears best characterised by a 2006 meeting between Maria Shriver, wife of the California governor, Arnold Schwarzenegger, and Sonia Gandhi. The meeting, U.S. diplomats reported, went well. "Usually withdrawn and reserved ... this was a more relaxed Sonia, possibly because she felt a personal rapport with Maria Shriver," one official wrote to Washington.

Yet a different reading of the meeting was possible. When Shriver congratulated Ms. Gandhi for her resoluteness and called her "courageous", her interlocutor was "clearly embarrassed by this adulation". Invited to a "women's conference" in California, Gandhi "made no commitment to attend."