The move would strip out the JSF money, eliminating seven aircraft, from a U.S. Defense Department request for $7.86 billion and 42 planes, according to the spending measure, which didn’t give a rationale for the new totals. 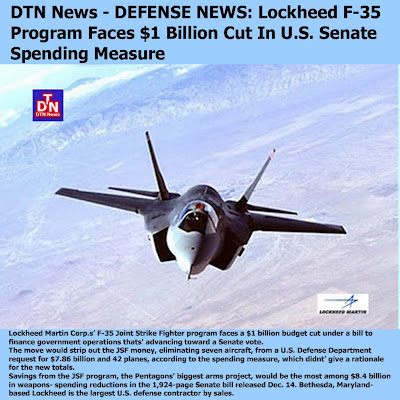 Savings from the JSF program, the Pentagon’s biggest arms project, would be the most among $8.4 billion in weapons- spending reductions in the 1,924-page Senate bill released Dec. 14. Bethesda, Maryland-based Lockheed is the largest U.S. defense contractor by sales.

Senators are proposing to drop five of the Air Force F-35s from the Pentagon’s request and two of the short-takeoff and vertical-landing models being built for the Marine Corps. The military expects the first F-35s to be ready for combat in 2016.

Separately, the Pentagon F-35 program office released today the per-aircraft costs of the 42 jets to be bought in the fourth low-rate production contract awarded Nov. 19. The Air Force version will cost $111.6 million, the Marine Corps short-takeoff and vertical landing model is projected at $109.4 million and the Navy carrier model will be $109.4 million.

The price includes one-time expenses for production equipment, flight-test instruments and manufacturing support equipment, the Pentagon said. It doesn’t include the propulsion system.

Jennifer Whitlow, a spokeswoman for Lockheed, said in an e- mailed statement the F-35’s price has “dropped dramatically” from the previous three production contracts. The Air Force version’s price has dropped as much as 50 percent compared with the first contract of two aircraft, she said.

Under the bill, the Pentagon would get $495 million to buy nine Boeing Co. F/A-18E/F fighters it didn’t request. The bill provides $2.1 billion to fully fund the Navy’s request for 35 Boeing and Textron Inc. V-22 tilt-rotor Osprey and $1.8 billion for additional Boeing P-8A Poseidon surveillance aircraft.

The so-called omnibus measure would cap a year that included a breakdown in the congressional budgeting process, as Democrats were unable to pass a tax-and-spending blueprint or any of the 12 annual appropriations bills to fund federal agencies for the fiscal year that began Oct. 1.

Once senators approve their legislation, it must be reconciled with a House version that keeps the federal government funded at the levels for fiscal 2010, which ended Sept. 30. It is called a “Continuing Resolution.” The House bill doesn’t reduce F-35 purchases.

Senate Appropriations Committee Chairman Daniel Inouye, a Hawaii Democrat, said he is confident the spending plan will be passed before Congress adjourns for the year on Dec. 30.

Defense Secretary Gates told reporters today at the White House the Senate version is preferable to the House measure.

“We have very little flexibility to move money around in the Pentagon budget” under the House proposal, he said. A continuing resolution for the Defense Department “is the worst of all possible worlds.”

To contact the reporter on this story: Anthony Capaccio in Washington atacapaccio@bloomberg.net

To contact the editors responsible for this story: Mark Silva at msilva34@bloomberg.net; Ed Dufner at edufner@bloomberg.net