Source: DTN News - - This article compiled by Roger Smith from reliable sources Indo-Asian News Service
(NSI News Source Info) ISLAMABAD, Pakistan - December 23, 2010: Pakistani Prime Minister Yousaf Raza Gilani on Thursday declared that the country's spy master will not appear in any US court in connection with the Mumbai terror attack. Addressing the National Assembly, he said the Inter-Services Intelligence (ISI) "is a sensitive agency of the Pakistani military and it is unimaginable that we will force their officers to appear in the US court on foreign dictation". 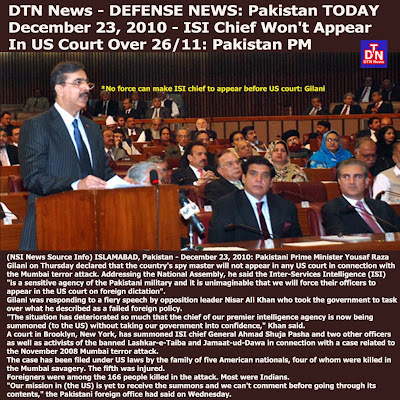 Gilani was responding to a fiery speech by opposition leader Nisar Ali Khan who took the government to task over what he described as a failed foreign policy.

"The situation has deteriorated so much that the chief of our premier intelligence agency is now being summoned (to the US) without taking our government into confidence," Khan said.

A court in Brooklyn, New York, has summoned ISI chief General Ahmad Shuja Pasha and two other officers as well as activists of the banned Lashkar-e-Taiba and Jamaat-ud-Dawa in connection with a case related to the November 2008 Mumbai terror attack.

The case has been filed under US laws by the family of five American nationals, four of whom were killed in the Mumbai savagery. The fifth was injured.

Foreigners were among the 166 people killed in the attack. Most were Indians.

"Our mission in (the US) is yet to receive the summons and we can't comment before going through its contents," the Pakistani foreign office had said on Wednesday.

Pakistan: Intelligence Chief Won't Be Forced to Appear in US Court

Pakistan says no US troops operation in its tribal regions

Hindustan Times - ‎47 minutes ago‎
India has conveyed to Pakistan that it wants to send a commission to Islamabad to question and get voice samples of Lashker-e-Tayyeba terrorists, ...
India proposes to send Commission to Pak to question 26/11 accused Times of India
India keen to send panel to Pak to question 26/11 suspects Sify
''Indian proposal for 26/11 comm to be dealt according to laws'' MSN India
The Express Tribune - indiablooms
all 20 news articles »

Pakistan does not want Afghanistan to become theatre of proxy wars: Haroon -

Associated Press of Pakistan - Mohammad Ilyas Khan - ‎3 hours ago‎
UNITED NATIONS, Dec 23 (APP): Pakistan told the UN Security Council on Wednesday that it supports an Afghan-led and inclusive ...
'US, allies should not make Pakistan scapegoat for failure in Afghanistan ... Sify
'Pak military's "dual policy" on terrorist safe havens an open invite to US ... Sify
'Pakistan being made scapegoat for US failures' Malaysia Sun
all 21 news articles »

CNN International - Thair Shaikh - ‎2 hours ago‎
Ahmer Rana faces imminent deportation to Pakistan having failed in his appeal to remain in the UK. London (CNN) -- A Pakistani-born ...
Campaign to stop teen's deportation BBC News
'He means so much to all of us' BBC News
Pakistani boy fights UK deportation Malaysia Sun
all 17 news articles »

nice i like this blog posts thanks for sharing hope you will be post more informative information here.
http://www.expressoomug.com/watch-live-cricket-streaming-ind-vs-pak-t20-2012/