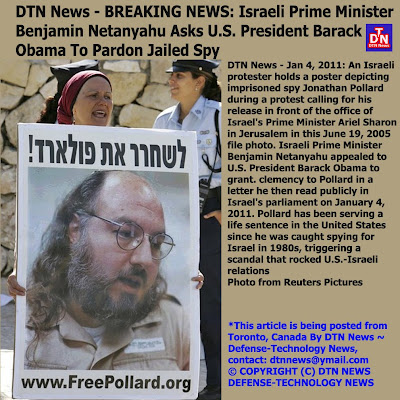 Pollard, a former U.S. Navy intelligence analyst, has been serving a life sentence in the United States since he was caught spying for Israel in the 1980s, triggering a scandal that rocked U.S.-Israeli relations.

“Mr. President, on behalf of the people of Israel, I am writing to you to request clemency for Jonathan Pollard. At the time of his arrest Jonathan was acting as an agent of the Israeli government,” Netanyahu said in Hebrew.

“Even though Israel was in no way directing its intelligence efforts against the United States, its actions were wrong and wholly unacceptable ... Israel will continue to abide by its commitment that such wrongful actions will never be repeated.”

Pollard’s release has been raised on many occasions by successive Israeli leaders with their U.S. counterparts in a variety of diplomatic frameworks, but no president has agreed to commute the sentence.

“We have received the letter and will review it,” White House spokesman Tommy Vietor said.

Netanyahu said, “Since Jonathan Pollard has now spent 25 years in prison, I believe that a new request for clemency is highly appropriate.”

He said many past and present senior U.S. officials knowledgeable of the affair, including many congressmen, agreed with the clemency request.

“I know the United States is a nation based on fairness, justice and mercy. For all these reasons, I respectfully ask that you favourably consider this request for clemency,” he said.

Pollard, who admitted spying for Israel, was arrested in 1985 outside the Israeli Embassy in Washington and sentenced for providing tens of thousands of pages of classified information to Israel.

His supporters say it was information Israel should have received from the United States and that his sentence was disproportionate. Pollard was sentenced to life in prison in 1987.

At the time, Israel presented the affair as an unauthorised operation by a fringe intelligence agency. Israel later granted Pollard citizenship in 1996 and acknowledged he was one of its spies in 1998.

Israeli officials say the country has since avoided operating in the United States.