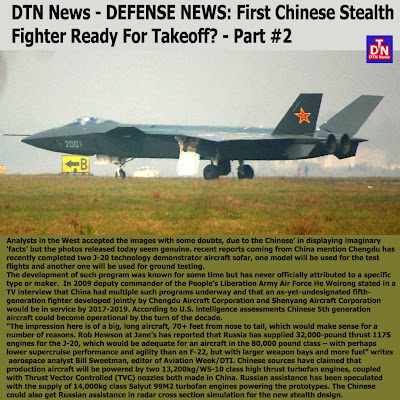 Its timing, Chengdu’s development record and official statements cast doubt on U.S. Defense Secretary Robert Gates’s 2009 prediction (in support of his decision to stop production of the Lockheed Martin F-22) that China would not have an operational stealth aircraft before 2020.

The debut of the J-20 was announced in a November 2009 interview on Chinese TV by Gen. He Weirong, deputy commander of the People’s Liberation Army Air Force. The general said a “fourth-generation” fighter (Chinese terminology for a stealth fighter) would be flown in 2010-11 and be operational in 2017-19.

The J-20 is a single-seat, twin-engine aircraft, bigger and heavier than the Sukhoi T-50 and the F-22. Comparison with ground-service vehicles points to an overall length of 75 ft. and a wingspan of 45 ft. or more, which would suggest a takeoff weight in the 75,000-80,000-lb. class with no external load. That in turn implies a generous internal fuel capacity. The overall length is close to that of the 1960s General Dynamics F-111, which carries 34,000 lb. of fuel.

The J-20 has a canard delta layout (like Chengdu’s J-10) with two canted, all-moving vertical stabilizers (like the T-50) and smaller canted ventral fins. The stealth body shaping is similar to that of the F-22. The flat body sides are aligned with the canted tails, the wing-body junction is clean, and there is a sharp chine line around the forward fuselage. The cant angles are greater than they are on the Lockheed Martin F-35, and the frameless canopy is similar to that of the F-22.

The engines are most likely members of the Russian Saturn AL-31F family, also used on the J-10. The production version will require yet-to-mature indigenous engines. The inlets use diverterless supersonic inlet (DSI) technology, first adopted for the F-35 but also used by Chengdu on the J-10B—the newest version of the J-10—and the Sino-Pakistani JF-17 Thunder.

The main landing gears retract into body-side bays, indicating the likely presence of F-22-style side weapon bays ahead of them. The ground clearance is higher than on the F-22, which would facilitate loading larger weapons including air-to-surface munitions. Chinese engineers at the Zhuhai air show in November disclosed that newly developed air-to-ground weapons are now required to be compatible with the J-20.

Features at the rear of the aircraft—including underwing actuator fairings, axisymmetrical engine exhausts and the ventral fins—appear less compatible with stealth, so the J-20 may not match the all-aspect stealth of the F-22. There are two possible explanations for this: Either the aircraft seen here is the first step toward an operational design, or China’s requirements do not place as much stress on rear-aspect signatures.

The major open question at this point is whether the J-20 is a true prototype, like the T-50, or a technology demonstrator, with a status similar to the YF-22 flown in 1990. That question will be answered by whether, and how many, further J-20s enter flight testing in the next 12-24 months.

Developing an effective multi-mission stealthy aircraft presents challenges beyond the airframe, because it requires a sensor suite that uses automated data fusion, emission control and low-probability-of-intercept data links to build an operational picture for the pilot without giving away the aircraft’s own location.

A rapid development program would be a challenge for China’s combat aircraft industry, which is currently busy: The J-10B, FC-17 and Shenyang’s J-11B and carrier-based J-15 are all under development. However, the progress of China’s military aviation technology has been rapid since the first flight of the J-10 in 1996, owing to the nation’s growing economy and the push by the People’s Liberation Army for a modernized military force in all domains. Before the J-10, China’s only indigenous production combat aircraft were the Shenyang J-8 and Xian JH-7, reflecting early-1960s technology from Russia and Europe.

Engine development has lagged airframe development, with reports that the Shenyang WS-10 engine, slated to replace Russian engines in the J-11B, has been slow to reach acceptable reliability and durability levels. That may not be surprising, given that high-performance engine technology is founded on specialized alloys and processes that often have no other uses. (The existence of the J-11B, essentially a “bootleg” version of the Su-27, has been a strain on relationships between the Russian and Chinese industries.)

Progress with avionics may be indicated by the advent of the J-10B, with new features that include a canted radar bulkhead (normally associated with an active, electronically scanned array antenna), an infrared search-and-track system, and housings for new electronic warfare antennas.

One question that may go unanswered for a long time concerns the degree to which cyberespionage has aided the development of the J-20. U.S. defense industry cybersecurity experts have cited 2006—close to the date when the J-20 program would have started—as the point at which they became aware of what was later named the advanced persistent threat (APT), a campaign of cyberintrusion aimed primarily at military and defense industries and characterized by sophisticated infiltration and exfiltration techniques.

Dale Meyerrose, information security vice president for the Harris Corp. and former chief information officer for the director of national intelligence, told an Aviation Week cybersecurity conference in April 2010 that the APT had been little discussed outside the classified realm, up to that point, because “the vast majority of APT attacks are believed to come from a single country.”

Between 2009 and early 2010, Lockheed Martin found that “six to eight companies” among its subcontractors “had been totally compromised—e-mails, their networks, everything,” according to Chief Information Security Officer Anne Mullins.

The way in which the J-20 was unveiled also reflects China’s use and control of information technology to support national interests. The test airfield is located in the city of Chengdu and is not secure, with many public viewing points. Photography is technically forbidden, but reports suggest that patrols have been permitting the use of cell phone cameras. From Dec. 25‑29, these images were placed on Chinese Internet discussion boards, and after an early intervention by censors—which served to draw attention to the activity—they appeared with steadily increasing quality. Substantial international attention was thereby achieved without any official disclosures.

DISCLAIMER STATEMENT
WHILST EVERY EFFORT HAS BEEN MADE TO ENSURE THE ACCURACY OF THE INFORMATION SUPPLIED HEREIN, DTN NEWS ~ DEFENSE-TECHNOLOGY NEWS CANNOT BE HELD RESPONSIBLE FOR ANY ERRORS OR OMISSIONS. UNLESS OTHERWISE INDICATED, OPINIONS EXPRESSED HEREIN ARE THOSE OF THE AUTHOR OF THE PAGE AND DO NOT NECESSARILY REPRESENT THE CORPORATE VIEWS OF DTN NEWS ~ DEFENSE-TECHNOLOGY NEWS.